The test version of the demo is complete, and I'll be PMing links to my testers soon!

I want to give a huge thanks to all the testers, and an even huger thanks to all my teammates who made this possible! Sooz, Maki, Pizza, Jo, and Geoff, thank you so much for helping me with this project!

After I get feedback from the testers, I'll be working on making the testing demo ready for a public release! ^_____^

UPDATE: No longer looking for testers as we've gotten plenty of them. Thanks everyone :D

Hello everyone! :DDDD It's been a bit since I've posted a blog for this game, and I've been hard at work on this game (when I wasn't participating in the Swap in the Middle With You contest >.> XD).

I should have a short-ish demo ready to go in about a month, and I wanted to go ahead and put out a call for beta testers. I'll need people who don't mind looking for bugs and letting me know if the demo I put out feels like a good amount of story for a release. I'd totally appreciate anyone who's willing to do this, and of course I'll be adding you as a Tester to the gamepage.

Game Progress and a Question

To show how things are coming along, I'd like to introduce my friend, the Game Progress Meter! :D 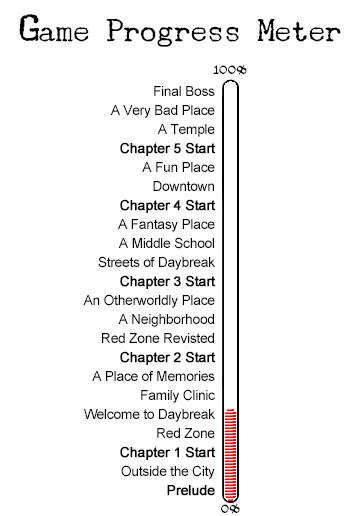 This is where I'm at in the game for the most part (much of the dialog hasn't been edited and inserted into the game (it's sitting patiently in a Google Doc XD), but gameplay wise, this is where I am ^_^).

Back in Luxaren Allure, I went with on-screen enemy encounters, and that worked alright (though I may have made them move too fast, in hindsight XD). For WaUTaH, I thought I'd try something different, the Encounter Bar.

The way the bar works is, using Galv's Variable Instance Bars, a bar at the top of the screen will fill, showing you how close you are to an enemy encounter. When it fills all the way up, it's battle time!

Here's a video of how it looks in-game. (Please note that the maps shown are still under construction and I've already looted most of the items from them in the shown playthrough ^^;)

Seeing how encounters can be a touchy subject, I thought I'd see what people thought of doing things this way. I wanted something that seemed both traditional-RPG flavored without the unknown element of enemies just popping up. Each encounter has the bar fill at the same speed, so you get a feel of how much exploring you can do between battles.

I was thinking of using an option where you can turn the bar off if you'd rather just be surprised by the encounters for a more old-school feel, and using Yanfly's System Options, I implemented one, but the problem is, if you turn the bar off, walk a few steps, then turn it back on, the bar is no longer at the correct position. I guess I could still get this feature to work if I just had an NPC in a safe area that allowed you to turn the bar off.

Hello everyone! ^_^ Production has been going on pretty steadily since the last update. I'd like to thank Maki for finishing all of the character art (and it looks totally awesome, btw!), Pizza for the amazing tilesets he's created for the project, Geoff Moore for his wonderful music he's composing for the game, and Sooz for her general support, inspiration, and for listening to me babble about the game on end.

After trying to tackle creating all the battle animations from scratch, I've gotten some help on that end as well, and I am so happy to welcome JosephSeraph to the team! He's making some amazing animations for the psychic powers, and I can't wait to show them off!

Being able to work with so many people I respect from the RPG Maker community is amazing, and I want to thank you all again for all of your hard work! ^________^ 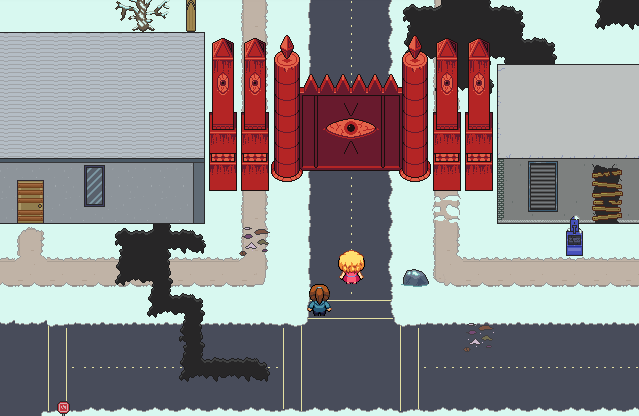 Today, I'd like to talk about the secrets of the plot (without giving away spoilerific specifics XD), and, specifically, how you go about delivering those tidbits of information to the player. In Weird and Unfortunate, while you're dealing with all the stuff on the surface, there's a darker backstory to how things got all messed up, and I've been pondering on how to give this information to the player, bit by bit.

These are supposed to be secrets, snippets of story that aren't vital to enjoying the game, but things that the player can seek out or stumble on to learn more about what's been happening to make this town go crazy.

After playing Undertale, I was a bit fascinated by W.D. Gaster, a character who is only barely hinted at anywhere in the game and who you can only learn more about by messing with the game files. He seems to be more of a dummied-out character than something you were every supposed to find out about, and yet, I found the idea of hard-to-find NPCs whispering secrets about a dark part of the game to be fascinating, but, of course, it's an idea I'd like to put in the actual game rather than have people have to go through data files to find it.

At first, I thought, "What if you had a random number generator that ran whenever you moved from map to map, and if it picked the right number, a document or NPC would appear that would give you some of this dark secret backstory? If I have multiple spots like this, it's likely that the player will find one or two of them and have some bits and pieces of the secret story!"

While the part of me that likes secrets found this to be a cool idea, the part of me designing gameplay did not. Leaving any element up to chance irks me a little from a gameplay perspective, even if it's something non-vital like this. The gameplay-loving side of me thinks it would be much more fun to leave, say, items that open doors scattered in hard-to-reach places and then put the secret story scraps behind those doors.

What do you all think? When it comes to secrets like this, how do you think it should be handled? Have other games tackled something like this in an interesting way? I'd love to hear any ideas or suggestions! ^_^

Meet the Inhabitants of Daybreak

I'm currently still fighting off the Sickness That Wouldn't Go Away, so progress has been a little slower than intended, but who has been working hard is MakioKuta! Maki's been amazing to work with and has been drawing like crazy, getting the character art done. As another teaser, and to show of more of her lovely art, I'd like to post a list of the weird characters you'll meet in Daybreak. 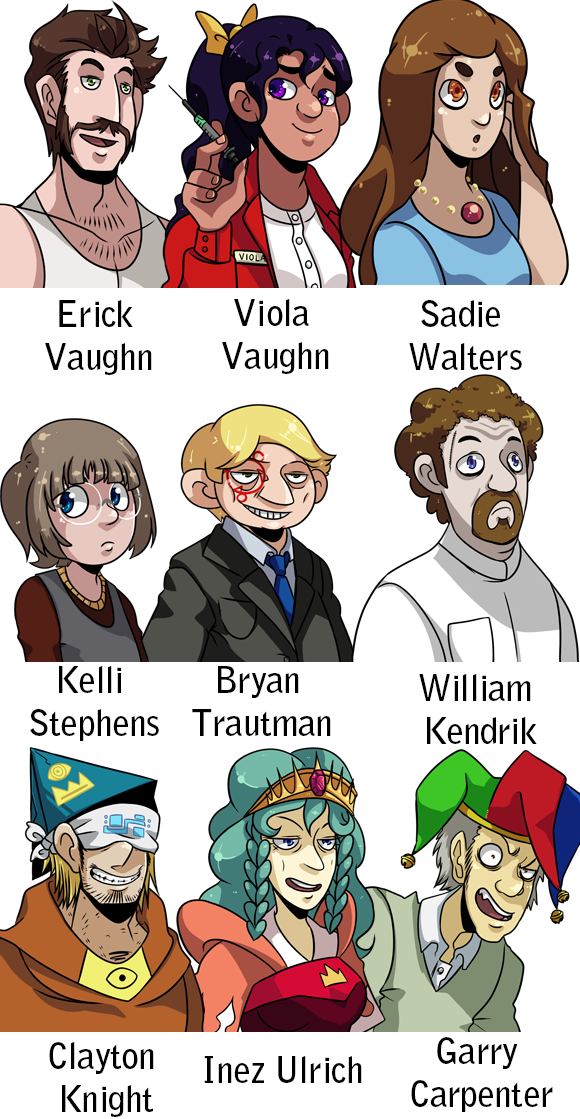 Who are these characters? What is unity doing with this game? STAY TUNED FOR MORE INFO!

But while we're talking about Maki, you should totally check out her latest game, just released, called I Object!? This is a cute, hilarious and awesome game that I had the privilege of testing, and at about an hour of playtime, it won't take much of your time, either! It has awesome mapping by Indrah and eventing by Rachael!

Hello everyone! :D First off, you guys have shown a ton of enthusiasm and been super helpful with feedback for the week since this gamepage launched. Huge thanks for that, and for everyone that's subscribed! Seriously! It's been amazing! ^_^

Today I wanted to talk a little bit about the gameplay in Weird and Unfortunate. Instead of magic, there are psychic powers, and they don't exactly conform to the old fire/blizzard/thunder kind of powers, so I initially struggled with how to do weaknesses and strengths. I wanted to make sure the player generally knew what was useful on what enemy.

What I came up with was a system where every enemy has a "type." Here are the enemy types: 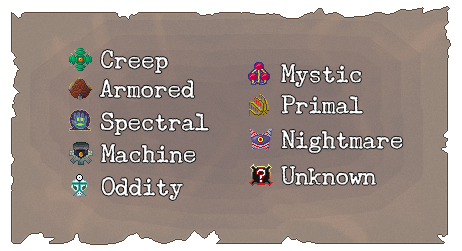 Each enemy has their type displayed before their name for easy identification. Shout out and thanks to Red Nova for doing the coding for me to get that to work right. Here's an example of how it looks in game: 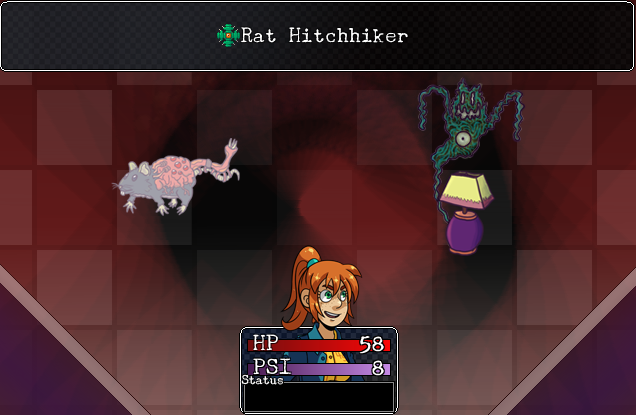 "That's all well and good," you may say, "but how does that help me tell what each enemy is weak against? Is there a chart I have to memorize?"

Nope! Instead, every move tells you what types of enemies it works well (and poorly) against! 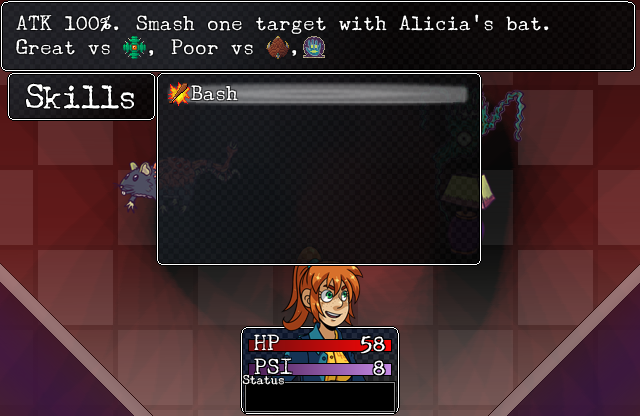 However, there is a catch. The last class of enemies is Unknown. This simply means that their weaknesses and strengths don't show up on moves. You'll have to figure those out for yourself! Many of the Unknown types are bosses, so you'll have to experiment a little to find out what works well against them.

This system is still undergoing testing, so I may be tweaking it a little, but so far it seems to be working well. Any questions, comments or suggestions are very welcome! ^_^

Meanwhile, I'm still putting together the early areas of the game, but things are going well. I'm also drawing all the icons and animations, which takes a bit of time at first. Here's a sneak peak of some healing animation work! 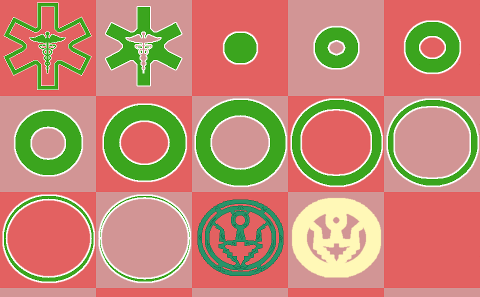 Thanks for checking this out, everyone! Talk to you soon! ^_^
Pages: first prev 1234 last