A Good and Fortunate Thing To Happen

DISCLAIMER: I was a beta tester during this game's development. However, I have written this review as nonetheless honest to my opinion of the final product.

In the early 2010s, horrors and spooks were the name of the game in the RPG Maker community thanks to the runaway successes of games like OFF and Yume Nikki. And while some days it’s easy to look back and wonder if the “Horror Boom” is truly behind us, in comes Weird and Unfortunate Things are Happening, a long-awaited title by unity, who previously developed 2015’s RPG Maker sensation Luxaren Allure. And after nearly half a decade and a substantial demo covering nearly half of the game’s content, I’m sure many players are eager for more.

Weird and Unfortunate pits players as the spunky protagonist Alicia, a young adult with innate PSI powers who has a fond attachment for her niece Dottie. The game makes no hesitation to convey Alicia’s dedication to Dottie, which not only establishes her motivation as the hero, but it also ends up being a significant driving force for the game’s events, where the town of Daybreak undergoes a twisted metamorphosis by hands unknown. 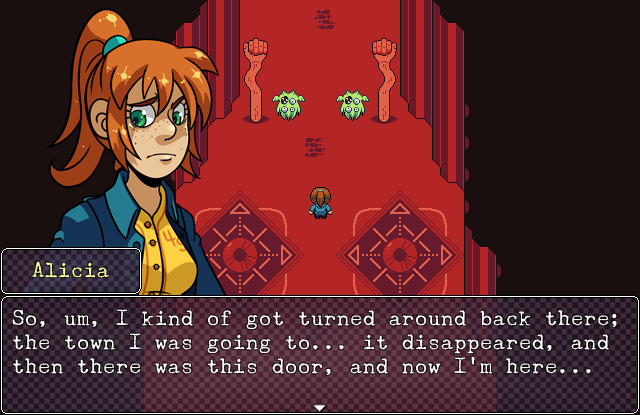 Players will explore the shattered remains of Daybreak, weaving in and out of the ruined city to learn of its fate while scavenging for treasure, with monsters lurking out of sight in many different areas. There is something of a twist to the standard random encounter system, in which walking around will slowly fill up a threat meter, triggering a battle once the bar is full. With a few notable exceptions, I always found the encounter rate to be “just right” and the ability to see exactly when encounters will happen let me carefully plan how I moved around the map. Players will definitely appreciate the level or foresight they have in managing their resources. Some maps, and sometimes whole dungeons, will take place in an interdimensional zone called Vedim Space, in which encounters are visible.

Combat constitutes a significant portion of the Weird and Unfortunate experience, as players will be cutting down eldritch monsters such as haunted puppets, grotesque slimes, and evil robots throughout the course of the adventure. Characters utilize their own unique skill sets, usually evening out to some sort of regular rotation as they gain more skills throughout the story and through the skill tree. Most abilities stay useful throughout the entire game, such as Damage Over Time skills that damage even bosses, HP-draining attacks that help you in a pinch, and many others. I found that I was always trying to plan my battles at least two turns in advance, and thinking of how these skills best synergize with one another.

What I especially appreciated is that, while you are definitely expected to learn the full utility of the party’s repertoire and how each character plays off of one another, there was rarely any one “correct” way to deal with encounters, and different play styles are equally effective in overcoming boss battles. You are never really bottlenecked into approaching combat in an “intended” way, and it never feels overtuned. However, I did find the sheer number of status ailments to keep track of to be a bit of a problem, and it wasn’t until the game’s second half that I could commit most of their effects to memory.

Outside of battles, Daybreak and the Vedim Space are also delightful to explore, with plenty of unique visuals to see and experience. I think Weird and Unfortunate might hold some sort of record for the highest number of unique tiles and graphics in an RPG Maker game, and the sheer volume of unique assets is beyond impressive. Everything from decorations, to subtle references, to a slew of graffiti giving nods to people involved in the game’s development brings everything together in the eerie aesthetic and story that it tells. No corner was cut and no expense spared to make every area unique.

Alicia eventually meets new companions to round out the party, each with their own experiences and developments. Miriam is a gun-slinging secretary with a fuse short enough to make any demon take a second guess, and Lamar is a compassionate elementary school teacher who’s level-headedness keeps the party going, despite his hesitation to take charge. Players will also meet a slew of supporting characters throughout the journey that have their own unique stories and also help the main characters grow as people in their own regards. Although, sometimes it doesn’t feel like this happens as often as I would have liked.

Indeed, if I could fault Weird and Unfortunate on any one particular thing, it is that character development tends to be a bit uneven and the party may not go through as many developments as you might expect from a game of this length. Most of the party’s advancement happens in the first half of the story, which spends a considerable amount of time setting up everyone’s individual motivations for pressing on. But in the second half it doesn’t seem like everyone’s motivations to continue change much beyond “Well we’ve come this far, so we might as well keep going.” Thankfully, this picks back up towards the game’s final hours, and those who can stick it out through those dead zones will be rewarded with some truly heartwarming new resolve. 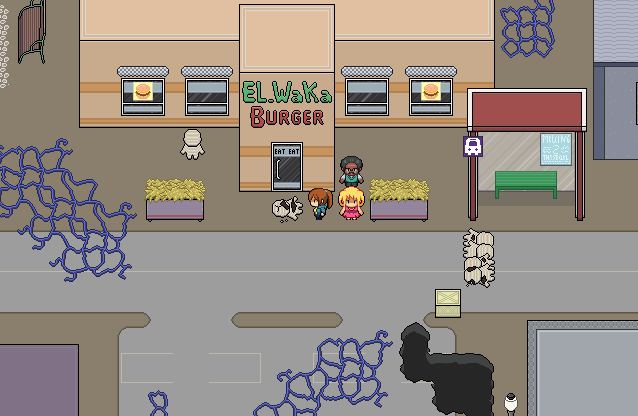 Then again, this is not a game that solely focuses on the protagonists or their growths, and players may opt to spend a considerable amount of time in the strange and mysterious exploration zones of Vedim space. These combat-free extra areas are akin to Yume Nikki and other walkabout titles, in which you walk around and explore confined substories that range from cryptic to downright terrifying. And every single one of these are just absolutely rewarding to experience. Unity has spared no effort to make sure that this story has something new and different around every corner.

And that brings me to appreciate Weird and Unfortunate on a level of sheer completeness: a game that takes advantage of and brings out the best of every one of RPG Maker’s functions. It’s a game that isn’t afraid to be an in-depth RPG, nor is it afraid to be reminiscent of the more exploration-focused Horror games that put RPG Maker back on the map. And anyone who has played RPG Maker games of either type who wished to find something veering more in the other direction will appreciate the game’s fusion of both ideas, much like Jimmy and the Pulsating Mass before it.

I don’t think it would be fair to say that Weird and Unfortunate Things are Happening brings out the best of any one kind of RPG Maker game. It brings out the best of every kind of RPG Maker game, and is a celebration of the sheer diversity and creativity that we’ve come to love from these games. No matter what kind of games introduced you to RPG Maker, this game will have something for you. And at a runtime of over 15 hours, you’ll be enjoying that something for quite some time.

Five years of love and passion went into this game. And I hope it will be celebrated for many more.

Close
11/30/2020 08:22 PM
Yeah, I enjoyed this game so much. I think that you hit the nail on the head in your penultimate paragraph. Weird and Unfortunate really resonated with me as being a solid fusion of Yume Nikki-style abstract world exploration with rpg mechanics. Really felt like I didn't know what I'd see next, which, for me, is the heart of most good rpgs--the thrill and wonder of exploration.
unity

Close
12/01/2020 01:04 AM
Huge huge thank yous for this review, Sgt! Your points here really speak to me, as I was thinking a lot of this myself lately, with regards to what works and what doesn't work as much.

I'm so glad you liked the battles and found you could "solve" them in any way you wanted. You are absolutely right about status effects, I went way overboard, leaned too heavily on them, and without an easy way to know what they all do at a glance, it became a bit cumbersome.

I also wish I'd done more with character development. I planned all the locations in advance and worked on them over time, and I just wish I had worked in more character growth and worked that into the location. It's definitely a big thing I want to try to work on in the future.

Thanks again for the spot-on critique and just overall super solid review here! It means a lot to me, and I want to thank you again for all the testing help and just generally being awesome and supportive, Sgt! I can't tell you how much I'm looking forward to Soma Union and what I've seen of it already wows me! :DDDDDDDDD
kentona

You can do the "more" you wanted there!
unity

You can do the "more" you wanted there!

Hahaha, maybe in ten or fifteen years or something. Even I'm not insane enough to try to remake something I just finished XD And it would be called "Totally Normal Edition"

Close
12/01/2020 11:00 PM
Link your RMN RPG Gear Portable to someone elses' via game cable and you too can trade your Sherbet-flavored Elothu for someone's ultra-rare Spicy-Nacho Farudon! XD
Pages: 1