Time to fix that forehead once for all!

Hello!
Today I played the third rpgmaker game dedicated to a youtuber: last year I played (and reviewed) Back to Felix, a game dedicated to Pewdiepie, then BoxxyQuest: The Gathering Storm... this year is instead time to play Jack's Forehead Surgery, a game about Jacksfilms, or John Patrick "Jack" Douglass.

This game was made with RPGMaker VX Ace by Josh Taylor alias asdfJosh with in one month, for the 2015 3rd #JacksChallenge. This game was probably inspired by Jacksfilms' video "FIX MY FOREHEAD", since it starts a tuesday afternoon in which John/Jack Douglass is going to a clinic for a forehead reduction. 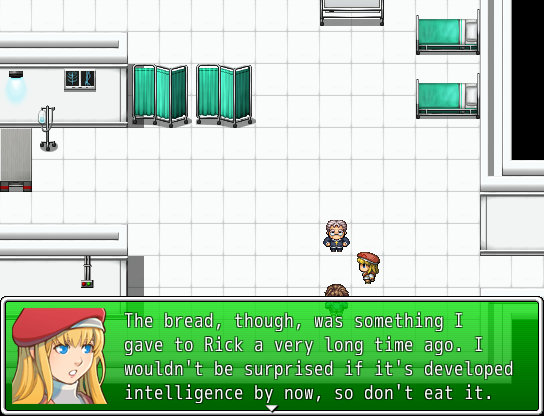 Believe me, this special bread will become useful during the adventure!

BUT... guess what? Something happens, othwerwise there would be no adventure! The quirky staff of the clinic warns our protagonist that some monsters that live in the chemical waste dump under the clinic stole some important medical equipment that is needed for the surgical operation. Unfortunately Rick, the attendant that usually deals with the critters, is ill, so Jack can choose between waiting some days for the man to get better and come back to work, or having Dr. Green and Dr. Crawford use improvised tools. But no, he chooses another option: with Rick's equipment he'll try to heroically recover the needed items by himself!

So the valiant Jack takes a communicator, Rick's rifle and stale bread, swallows a pill that should protect him (I hope so!) from the radioactivity of the rubbish dump, and finally descends the stair into the unknown. Well, apparently most of these do not creatures seems to be too dangerous, like the Immobile Drooling Flora or the Harmless Living Waste... but who knows that else lives there! 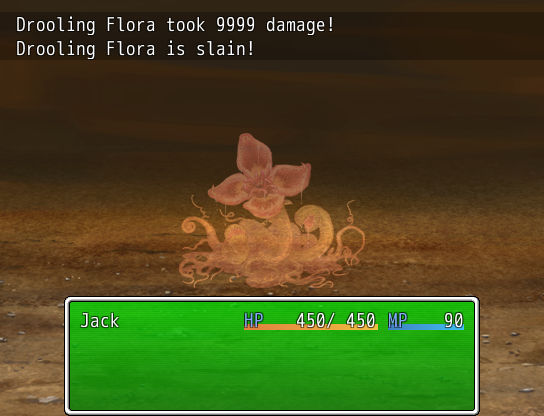 Remember to use the special hi-tech rifle to attack, that is listed as an item, not equipment or special ability (so you need to open the items menu to attack)!

Jack's Forehead Surgery is a quite short adventure game that will take about 25 minutes from the beginning to the end. I call it adventure game because it's not a horror game (no chase sections or exploration), not an rpg (there is no party, no experience levels and battles aren't combat encounters in the traditional sense),and not a puzzle game (even if there are some tasks but they're more "find the items -> use it here"). The game just consist in exploring few rooms to find the needed items to progress and solve some tasks interacting with the scenarios. Battles are just "use the right item in your turn to win, because creatures are immune to standard attacks, and apparently they also always miss. I won't complain!

Ok, visually the game uses a ton of RTPs and other classic RPGMaker VX Ace assets, but there are also some custom made facesets, like those of Jack and Jaden Smith (oh yes, there's also him in this game!) made by the developer. Even if these are photos that obviously clash with the rest of the anime-styled RPGMaker VX Ace sprites, I must admit that the protagonist, Jack, has a ton of different expressions and these are well used through the adventure. Moreover there are lots of interactions, even with useless items like the dog of a vending machine that only sells tomato soup! Uhm ok.
Mapping is ok, overly spacious rooms and sewers aside, at least there are no mapping errors and no mapping orrors, no random encounters (well all encounters are fixed, but again, this is a small adventure game even if it's in Rpgmaker!).
Concerning music and sounds it's all RTP except for the theme of the main menu, in any case, nothing new, nothing special... but also nothing bad. 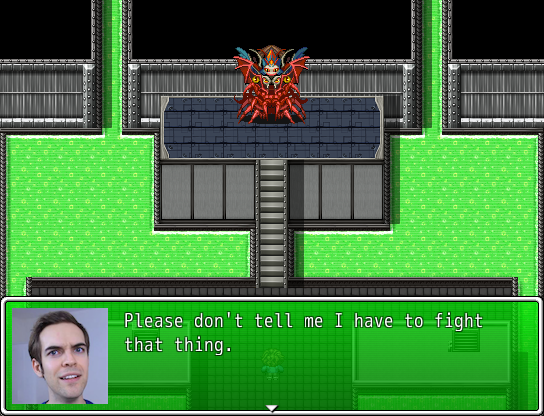 But you will! Because you absolutely have to fight that thing if you want the desired forehead reduction!

Final Verdict
Jack's Forehead Surgery is a little comedy adventure scenario clearly made in a few time for an event, so I could not expect much, but I think everyone will agree that this is a game that despite offering nothing new or special is at least solid, has no bugs, typos or cut dialogues. Is it good? Well that's subjective, for me it was ok, considering the premise and the reason why this was created.