Baa Baa Black Sheep, have you any wool? Nah, brah! I got a sword I'm gonna stab you in the face with!

The developer describes this a "glorified demo". So is it complete or is it a demo? The gamepage says prelude. Since they say this is a complete game, I will deal with it like a complete game.

Story: You play as Goatchild, whose purpose in life...is...to...rebel? It's never specified what she's rebelling against. She has a mantra that we all die, so our goal should be to protect what we believe in. If it isn't obvious, I'm struggling to describe this story. 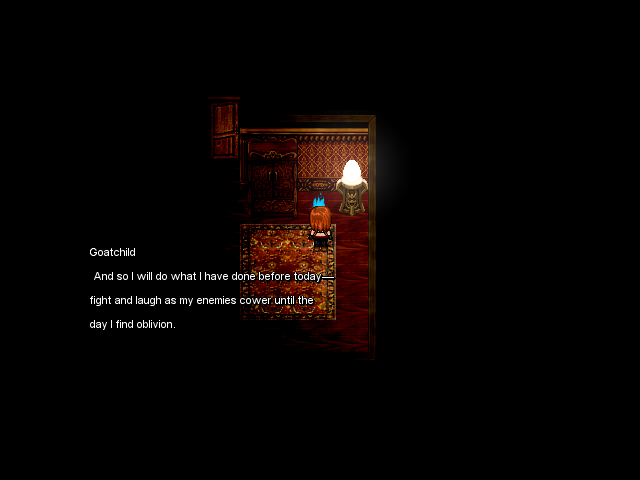 Heghlu'meH QaQ jajvam! (Today is a good day to die!)


Writing: I know there's a story there but it's buried under a bunch of purple prose. She's a goatchild, which I guess is a play on the word "scapegoat" to suggest that she's an outcast of some sort. There is no indication what she's fighting for, and it's not even actually clear what she's fighting against. By the title, she's probably having a nightmare and you're fighting inner demons. Since this game is prelude to a story where she's probably going to be awake, nothing here helps very much. You are basically in a house. Once you go through the door to leave the starting room, you are in a hallway with several exits. Any exit you take will lead you to a battle scenario.

The purple prose. That's what the writing seems to predominantly be. Purple prose is excessively ornate writing used for mundane passages. This variety of purple prose is heavily mired in metaphor that makes the game's story nearly incomprehensible. What I've said about her being in a nightmare fighting personal demons? That's an informed guess based on what I see, the title of the game, and what the gamepage tells me. I don't actually know that that's what the game is about. That I'm not confident enough in my knowledge to say that I actually know what the game is about is absolutely the result of excessive purple prose. The writing is trying to be pretty but all it's accomplished is that it has guaranteed that I do not understand what the game is about, who the protagonist is, or why I should care. The result is that I don't care and have lost all interest in the story.

If nobody understands what you're saying, then nobody's impressed. Frankly, I don't understand what the heck is going on, and it's annoying me. 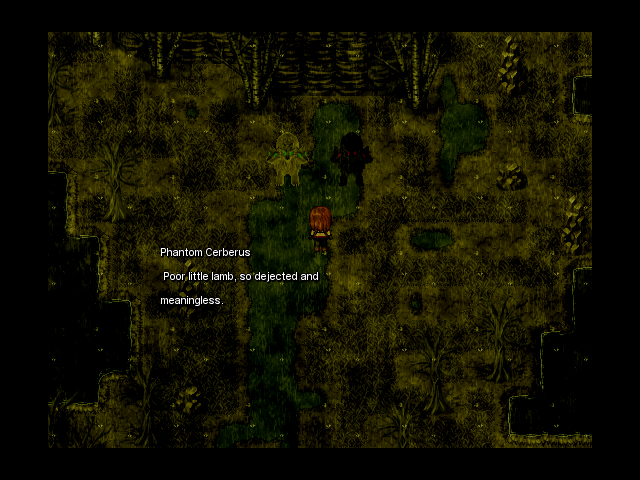 
Gameplay: So, the gameplay is interesting. This developer has successfully made a fast paced action system for this game. What do I say about this? It's impressive, it's amazing, it's really well done, but it definitely needs more work. It's really hard to know when you're actually managing to hit enemies. It takes a bit to understand the difference between your health bar, the enemy health bar, and the ability bar. Or is that a stamina bar? There is a certain lack of information in this game. The game comes with a manual, but people do not read RPG Maker read mes, so people are going to play the game first and then go to the manual second. Regardless, there absolutely should be a tutorial (non-mandatory) in game. As for health and status, labeling these things really is a necessity.

I like the combat system. You can use teleport to quickly move around enemies and avoid attacks. This worked quite well against the Phantom Cerberus fire breath attacks. The controls were okay, but I couldn't really use the special attacks effectively on the keyboard. If it's possible to use a gamepad, I'd recommend that. The keyboard control isn't intuitive to this kind of combat system. It's a very fast-paced system that is not easy to use on a QWERTY layout.

It's a good system that...works as-is, but basically needs some streamlining. I'd like to know I'm making contact with the enemies when I attack. I could see it with the larger enemies because when you hit them, they knock back, but the smaller enemies bunch around you and you just don't have a clue what's going on. So, minor tweaking, adding a damage animations and sound effects, and general streamlining would really be nice.

The final thing I'd like to address is the text. It is all autoscrolling. That's a no from me. If you're going to have text autoscroll, then I'm going to have to insist on a pause feature that can be used during cutscenes. 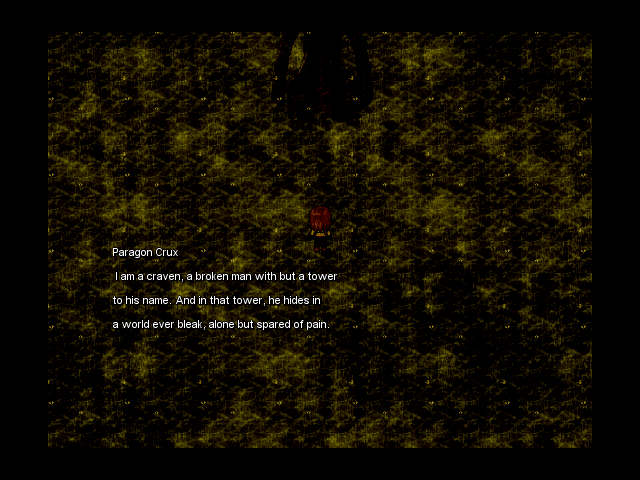 "What is a man? A miserable little pile of secrets!


Graphics: Are very nice. It's a grimdark setting. I am very fond of the protagonist sprite. It puts me in mind of characters like BloodRayne or Bayonetta. The visual atmosphere is top notch and stunning. It really is. Not sure where any of it is from. The font is Australian Sunrise and it works quite well in the game. There's a note that says Must Install Font, but I have no idea what it's talking about. The VX base font is Constantia and that is definitely not what this game is using so the font IS installed. It's fine. I know for a fact I don't have Australian Sunrise on my computer. I have ton of different fonts I use.

Sound: Mostly good. I have thing about the type of music used, and I see no reason for music to just be endlessly dire and depressing. This game definitely falls under that criticism, but overall the sound is good. Sound effects are a bit lacking. All of the attacks and movements have sound effects, but there is no sound for dealing or receiving damage. Coupled with the fact that there are also no damage animations, this makes combat a confused mess.

Conclusion: The game is nice, but it has a slew of minor issues that really get in the way of it being enjoyable. It's worth keeping an eye on. If the game this is a prelude to addresses the problems that this game has, it should be solid. The story is not comprehensible. I don't understand what's going on or why I should care. As such, I have no reason to think the next game will be any better. That, above all, is why that should be addressed. When it works, it's amazing, but it's surrounded by elements that just don't work.

Close
03/02/2019 07:14 PM
First of all, thank you for reviewing a game I was pretty certain everyone had forgotten about (myself included)! xD

One thing I'd like to clarify foremost is that this game is a prelude primarily meant to showcase the WIP battle system of Goatchild: Advent of Vantelieth (which has far less combat and more story and exploration); there is no cohesive story to be found here. Most of the purple prose prevalent in the dialogue serves only to look pretty, provoke thought, and present subtle hints to characters' backstories; it does not refer to the plot of Advent of Vantelieth in any way. Although all characters featured in this game are to appear in Advent of Vantelieth, all events depicted in this standalone demo are completely non-canon to that game.

I'm not sure about animations as it's been a while since I've played this game myself, but there is indeed sound for dealing and receiving damage, if a bit quiet compared to the sound of gunfire. I'm also not sure what's going on with the font, since I personally get blank text whenever I don't have Australian Sunrise installed.

You might have already seen it, but Advent of Vantelieth has been released and will indeed address many issues with the combat over time as I progress with the story. (The question is if I'll ever be motivated enough to resume production on that game, heh.)

EDIT: Regarding the auto-scrolling text, I just saw that there's already an option to disable that. It's the "Automatic Cutscenes" prompt that appears just after starting the game.
pianotm

Close
03/03/2019 04:14 AM
Thank you! And yeah, I kind of figured, which is why I focused more on gameplay. Honestly, I wouldn't have even reviewed this if it hadn't been one of the Pirate Review Event bounties. My first thought reviewing this was that there just wasn't hardly anything to review, and when that happens, I start nitpicking to bring my review word count up.

And yeah, if there was a sound that was made when hitting, then there's also a sound when you're hit and with those imps, I just could not tell who was hitting what. It was too hectic. In fact, I finally beat them by spamming teleport and going at them with hit and run attacks, because getting in close and trying to mow through them, I just had no idea what was going on.
Pages: 1