The full soundtrack is now available at this link:
https://forgottendawn-vgm.bandcamp.com/album/fade-prototype-complete-ost

The soundtrack has been composed over a period of two years from 2014 to 2016. The reason why I postponed the soundtrack release was mainly due to frequent change of plans during development.

The future _fade revamp will feature a different soundtrack altogether. 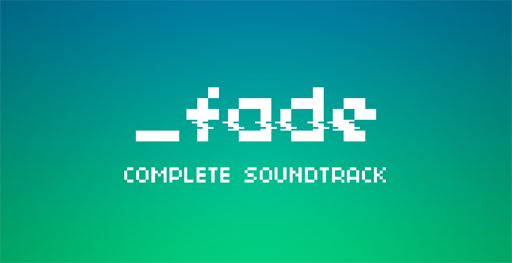 I’d just like to quickly inform you about this game’s development status. As of this post, I consider this version of the game as a finished prototype, meaning that I’m no longer actively working on it.

The concept will be revamped completely from scratch at some point in the future. I don’t know exactly when, or how, but I only know with certainty that I still have plans for this game, so nothing is lost. By marking this build as "finished", I’m simply making a distinction between the initial idea and the eventual future remake.

You guys should still feel absolutely free to try this game out as it is, but of course, I’m only asking you to keep all this information in mind while playing the experience. Thank you for having supported this project thus far, I think it’s really amazing and it’s heartwarming to say the least.

A few thoughts about the future of _fade

It’s been months since the last time I decided to write a little something for this project.
I’d just like to be honest with you for a sec and tell you how things have been here.

The main reason why I haven’t been releasing anything new for this game is because during all these months many thoughts have matured, and I think it would be beneficial for everyone to give ourselves a bit of a retrospective.

The idea came around at some point in 2014, following a series of other concepts that were quite beyond what I could afford in terms of scale and indeed resources. They still are, mind, but we’re gonna get to them in the next paragraphs. _fade was, in a sense, a distillation from the way I used to organize my own ideas and work load.

Ironically, the more I dived deep into its development, the more I kept adding content that would inevitably push the project further into the already uncertain future. Meanwhile, I had the privilege of working on game projects as both a composer and a writer/game designer, and therefore building up experience as I chugged along through the grinder.

Over the years, I had come to the realization that what I was doing was part of a vision, but I couldn’t fit the puzzle pieces together just yet. I knew something was amiss, but I couldn’t figure out what it was. At some point, I simply started accepting the fact that all ideas have their own scale and cycle, and all of them contribute to something.

As I’ve stated earlier, _fade wasn’t the only concept I had in mind back then. There are a lot of ideas I haven’t shared publicly yet and _fade represents only a fraction of what will hopefully be in the bigger picture. So, it all comes around to be sincere with oneself and coming to terms with reality, as well as our own intellectual honesty.

Trust me, it’s never easy. It’s nothing you can learn from someone else, it has to be achieved through trial-and-error, countless failures and in my case a lot of anxiety, disappointment and frustration. To me, _fade is still a very personal game and because it is so symbolic, I think the project deserves a special treatment.

Right now, I consider the currently available version as some kind of prologue/demo, just to get a hint of what the project can possibly be about. What I actually imagine for the game is much vaster and almost entirely different. I want _fade to be a world riddled with detail and lush, desolate surreal environments, and because of this goal in mind the actual effort that will be spent will be likely doubled, tripled, even quadrupled.

I want to do things right, as they should. I want to bring out as much potential as I can from this game, and I’m gonna tell you right from this very moment: you won’t likely see any update here for a long while until I feel ready enough to embrace the challenge again. I have other smaller projects that I would like to develop, starting from the recently released .defrag (that you should totally check out, by the way), and this time I do have a road map of all these countless concepts I’ve been writing over the past few years.

In short, the current version of _fade only represents a rough sketch of what the project will be like in the future. Now, I don’t wanna overhype it, but this is what I have been thinking this whole time and it seemed right in my head to share my thoughts with you all.

So, that’s about it for now. Thanks for reading this extremely long post and until the next update, please support my other available projects, present and future! :)

_fade v0.05 has been finally released and we're one step closer to finishing this prelude to the greater experience ahead.

What's new in this version:
- A short intro sequence acting as a premise to this game
- New events and world-changing puzzles
- New maps with some extra graphics!
- New music and sfx, including the implementation of the actual soundtrack.
- An ending sequence

Feel absolutely free to ask any question about the gameplay or report any bug occurring during the experience. For Windows 10 users, the game might encounter some issues related to compatibility. Run the game as Administrator and set the compatibility to Windows 8.1 or older. If you encounter other kinds of issues, feel free to report them by leaving a comment.

_fade is now in betatesting

Hey folks, quick update for you all.

A 0.05 beta release might come sooner than expected. The game has just entered the betatesting phase and is being actively tested by a group of volunteers (thanks!!) who are sharing feedback as I'm writing this blog post.

I have tried to apply some vast improvements over 0.04, including an intro sequence, the implementation of puzzles and various world-changing events, some new music, text and some graphical updates here and there. There's also an ending sequence now, so the game isn't looking so bare anymore. :D

I can't wait to show it to you guys, and another good news is that there's the possibility of submitting _fade to the GameJolt Fest event which will take place this month. Needless to say, I'm pretty excited about it.

Still picking up my jaw

I can only say one word: Wow.

I know I'm a newbie here but I honestly did not expect such reaction from the community in literally 2-3 days since the launch of _fade here.

Thank you so much, and it's just the beginning! It's a huge motivator for me, and I want to let you gents know that any feedback you can give is greatly appreciated! :D

Oh right, I am trying to craft the main puzzles as I speak. And... they seem to be working so far. :)

And thus, fade landed on RMN as well...

As a first blog entry here, I'd like to say that I'm really looking forward to doing some more progress for this game and it's very exciting to be a part of this community!

My personal goal for version 0.05 would be to add some more maps around and introducing the first puzzle events. Any graphical update will have a secondary priority for now, as my current priority is mainly targeted at finishing the bulk of the experience.

I have never published release dates so far and I do not intend to do so. Things will be done when they'll be done and for me, it's important to invest more time on your project making sure to minimize any potential blunder along the way.

I have some good plans about this, and my hope is to continue developing this experience, preparing myself for the bigger leap in the future (Steam).
Pages: 1