Merry Christmas everyone. This year for secret Santa I will be doing a review for Marrend. For Marrend I decided to play Nakaishi Wars. Nakaishi Wars is a game created with RPG Maker VX Ace. The 2 most defining features in this game are: it takes place in space!!! And it uses GTBS, a tactical combat system.

I think I want to get the GTBS thing over with first. Cause some other reviews I have read on this game unfairly critize the AI. The thing to keep in mind here is that this is a very complicated script and there’s just nothing Marrend can do to improve how these guys act. The engine just doesn’t have what it takes to handle this. So until Enterbrain makes a focused tactics maker, GTBS is the best thing out there.

There are some decent moments to be had in this combat experience. I personally liked the shop. You can buy and equip items that change what skills you have. The customization for the characters is probably the best part of this. Being able to decide if you want to have an offensive skill that targets multiple enemies or a skill that heals damage is a great thing to have in this sort of game. Though on the other hand you will find some skills that are just too over powered. For example, being able to stun your enemy for multiple turns is sort of game breaking (though on the plus side you don’t need to grind because of this.) 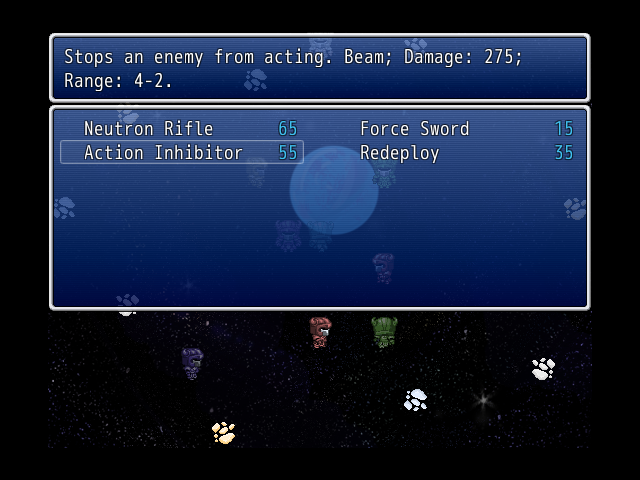 Hail to the game winning skill! Also... How am I walking around out there?

For a game that takes place in space I didn’t really feel like I was in space. Sure there is a nicely crafted spaceship and 2 oddly put together battles in space, but I never felt like I was there. Too often you just visit generic looking locations on a planet surface. There’s nothing exotic about the locations. They just look all the same. In the space battles you have a very strange looking space map with normal characters moving around. Wouldn’t it make more sense to have a space battle with spaceships. We never see the outside of your spaceship, the enemies spaceship, or what this universe looks like. Some things that would make the game feel more authentic: space battles between ships, enemies boaring your ship, planets that look unique, or some different kinds of alien species (because why is everyone human in a space game?)

Too often things are narrated to you about what’s going on. I think I would have rather seen these things happen so that I better understood the story. And it seems like the game is in a constant rush to get to the end. I feel like there is just a series of battles with a very loose story to connect them. If you asked me to give you a summary of what happened in this game I think I would be hard pressed to tell you. I felt like the combat system was the primary focus of this game and the story was just an excuse for it to happen.

Nakaishi Wars is a game with glimmers of hope and possibility. Personally I thought the GTBS system only needed some minor tweaks to make some of the stuff better. I think the story is the main thing holding this back. You don’t need to fill this game with battles. You could make a good GTBS with just a handful of battles and a well-developed story. Build the world, build the characters, and make me care about what’s going on.

After thinking about it for quite some time I have decided that a 2 / 5 is probably the best score for this game. It's a game with interesting elements. And if you're a huge fan of what's going on you're probably going to enjoy it a bit. But for a larger audience there isn't a lot holding you on and making you stay.