Today I'm introducing two new features for @JRL. Those features are the Context Menu, and the Action Menu.

What is the Context Menu? 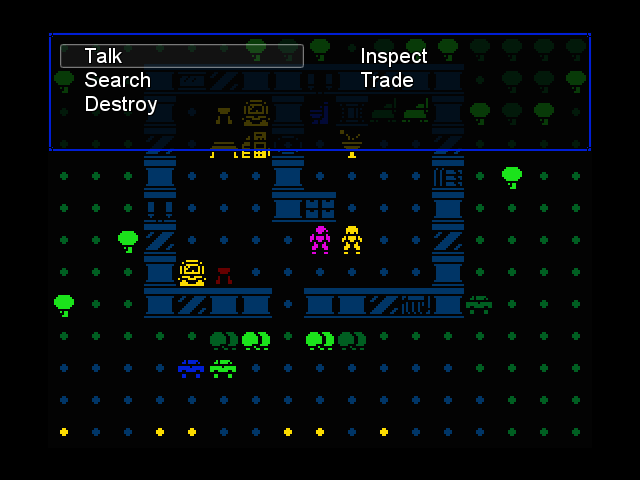 The Context Menu is the menu that pops up upon "checking" (pressing space bar) an object. It is global in the sense that it pops up regardless of whether the object is an NPC or an object, and from it, you have a selection of commands that you can use to interact with the object.

Commands such as talk, search, destroy, inspect and trade are common interactions, and will, in most cases, be available at all times.

These are not the only commands, however, as more will be added to the game depending on different factors. Other features, such as traits and context, will determine what commands get added. For example, if your character happens to have a rather violent trait, there's a chance he may be able to attempt to Intimidate an NPC for some money.


What is the Action Menu? 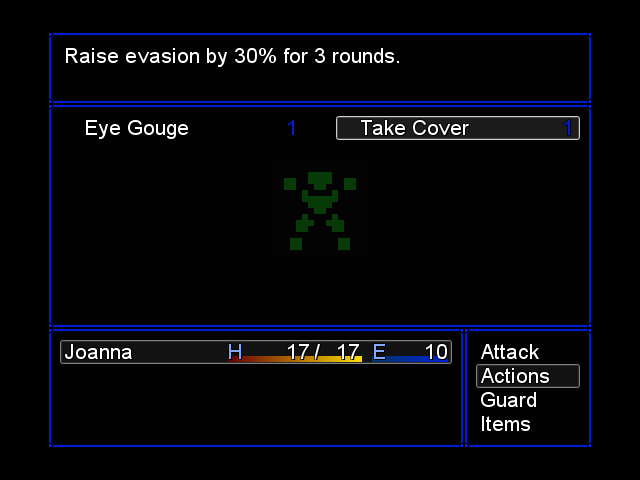 While still under-going work, the Action Menu is where you select commands to engage in 1v1 combat. The goal of the battle system, while using the default turn-based method, is to have the player thing tactically about how they want to approach each challenge the enemy gives them. Human enemies, for example, will be more prone to tackling the player, making them have to protect themselves while on the ground. Other enemies, such as the Zombie, can attempt to bite the player, introducing a very dangerous and serious ailment into the game. Throughout the game, the player will have to wrestle with the enemies using a variety of Actions, while still using Attack, in order to weaken and beat the enemy down to a position where they can wipe them out. Do you attempt to get in another blow, or do you shove the enemy off of you? It's a question players will have to consider under constantly shifting battle dynamics.

The attack button, as is obvious, is your regular attack. The Actions, however, determine what other moves you can do in combat other than straight forward damage. Here's a couple of them, all of which are not shown in the screen shot. Some are added and removed depending on you and your enemy's actions and gear.

Eye Gouge - Is particularly nasty. It inflicts a permanent status ailment on the enemy (considering the enemy has eyes), that will lower their hit accuracy by 20% for the rest of battle. This is a brutal opening move, which should free your character up from taking a good bit of damage. Stats in this game are very low, and most combat revolves around damage of 1 point. While this may not sound like much, consider the fact that our character may step into a zombie ambush, and that those 1's all add up... As you can see, the Eye Gouge can be very helpful!

Take Cover - Dive behind cover and raise your evasion by a significant amount. Sounds great! Excellent for avoiding damage, and along with your Eye Gouge, is a great way to mitigate what the enemy is capable of doing to you. The only problem with this, is that, well, some other Actions may not be available. Say you have a large two handed weapon and that gives you a special, high damage skill. You may not be able to take full advantage of that weapon while behind cover. You can still hit the enemy, but you won't be able to use that melee skill. However, say you have a firearm and you're behind cover... you get the idea.

Big Swing - A special melee-only skill for two-handed weapons. You rear back, and deliver a powerful blow at the cost of 1 energy. It's tough, it's heavy, but you have to make sure you're in the clear. Say, for example, an enemy is grappling with you... you may not be able to use your Big Swing until you...

Shove Off - If an enemy attempts to grapple with you, you will have the opportunity to shove them off (it costs no energy). Being grappled reduces your ability to successfully strike the enemy, so it's a good idea to shove off an enemy that is trying to grapple with you. Especially if you want to use your more powerful damaging skills.

Wound Care - Another useful Action that is context-sensitive. Some enemies have knives or other effects which can inflict a bleed. While this will deal damage over time, your character can freely patch the wound at the cost of no energy. You'll spend a turn as you stop the bleeding, but it also leaves you open to other attacks. Still, I suppose it's better than bleeding out all over the place.

Other Abilities - There are several other abilities in the game, and many more have yet to be added. We haven't even covered fire arm skills, nor its unique equip system. I'll get into that in a bit.

Coming Soon will be the introduction of several other systems in place. In the future, I will post regarding Firearms and the manner in which you will be able to equip them. I will cover more details relating to status effects and resistances, and will also cover some semi-random dungeon floor generation which, quite honestly, without any knowledge of programming, has been a pain in the butt.

I hope these have caught your interest. Stay tuned!