Before being the RpgmakerAddict I was the JrpgAddict as I played many games like Final Fantasy and its clones. Then I found a game called Fifth Era (sadly untranslated... anyway some characters are present in Theia as arena opponents) and this was the first rpgmaker I played. It was a fantasy jrpg heavily inspired by FFVII and FFVIII, and despite its limitations it was really great. The author? Mr. Lollo, the same of this Theia!

Theia is exactly what I expect from a good Rpgmaker game: a great and epic techno-fantasy adventure not unlike the professional Final Fantasy games I used to play. Maybe this is not overly original and new but surely a good story and a good rpg is something many players like, and Theia has a lot to offer! 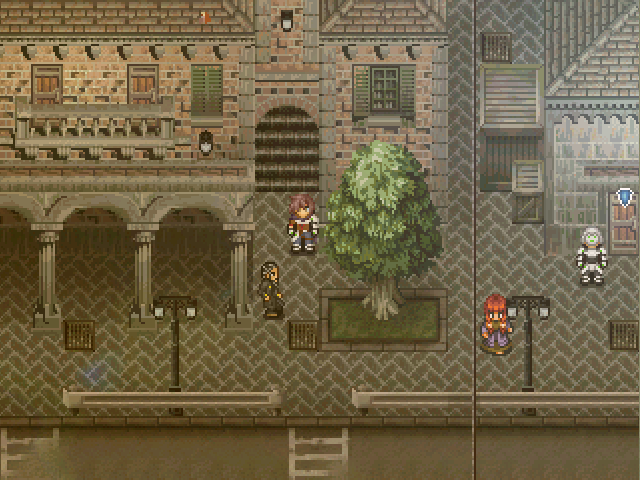 THE GOOD - Welcome to Ariathale!
Theia is an epic story about the world of Ariathale. The protagonist, Seth Sheridan, is apparently the typical introverse character armed with a big sword... but as the game progresses you will learn that there is much more. Soon he is joined by a colorful cast of characters, and each of them will have a different set of skills and abilities that you can improve and learn but wait! First you have to make them lose the "guest" status that locks the possibility to change their weapons and abilities.

Graphically I like this game a lot: the charsets used (nicely animated, some customs and some from Terranigma) fits perfectly with the vehicles and items clearly taken from the Metal Slug and Front Mission series. The custom facesets drawn by Lollo, as the rest of the art are really evocative. The setting comes to life, both thanks to the images used but also to lots of little details of the immersive enviroments, like the cat sleeping in the roof and the lights coming from the crystal in the wilderness. I like how the cities look, with the clash between old and new that creates a real coherent setting full of life. Oh and mapping is really good! Music too is appropriated to each part, I especially like the combat themes and the silly merchant Borghetti's theme. This level of polish surely took a lot of time and work.

Gameplay is the standard found in every jrpg game, but wait there's more: aside from battles and exploration, there are lots of diversions and minigames (my favourite is the motorbike chase part), puzzles, stealth levels and other nice additions that diversify the various parts of the game.
Let's go back to combat (that's the classical side-view, with a nice wide selection of opponents and well animated battlers): you have a large number of characters with unlockable skills and attacks, and I like how they are different for their abilities, not just character and appearance, also you have visible enemies and a nice tactical combat system. Expect also to fight a lot if you want to collect everything and unlock every content of the game. Because there's a LOT to do in this game, and the highest difficulty gives you more!

I left the story for the last part: while it's not overly original (but hey that's what every Final Fantasy passionate player expected, isn't it?), it's an epic tale. I enjoyed it very much as it delivers moments of joy, tragedy, humor and... well, romance too, as there are two available, and four different endings! I don't know many games that gives you so much content. 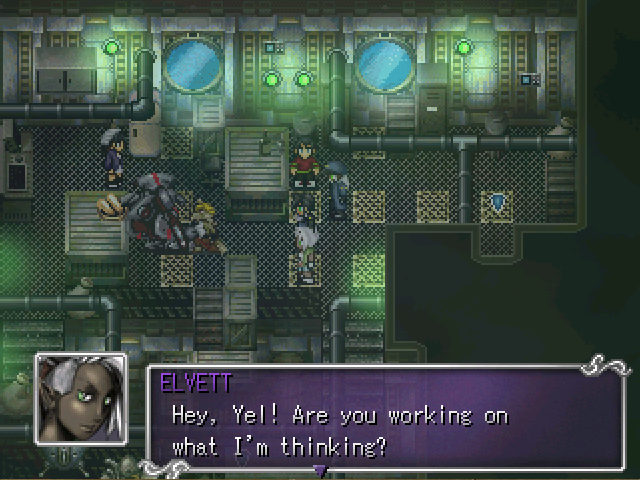 THE BAD - Sacred Rion!
What I don't like of this game? Well, few things: for example, unlike Fifth Era (where you can build your dream team from the start, immediately after you unlock each character, except for some particular sections) I mentioned before, here you can customize your party only in the last part of the game and for most of the adventure you are forced to use a fixed party. This would not be a problem if some of the characters weren't clearly inferior to others (Nimrod & Ferion, I'm talking about you!). Ok they aren't totally useless but they are useful in certain situations, while Horus and Seth are always useful (Ok, ok Ferion is the only one that can unlock chests, but in combat is... meh!).
One last thing I did not like was the obligatory (lot of) grinding you need to do towards the end, it's clear that you're really forced to do that if you're a completionist, still this is something I never liked too much, but it's ok as you can find it in every Jrpg and that's a typical feature of this kind of games. After all this is especially required for the optional parts and content. 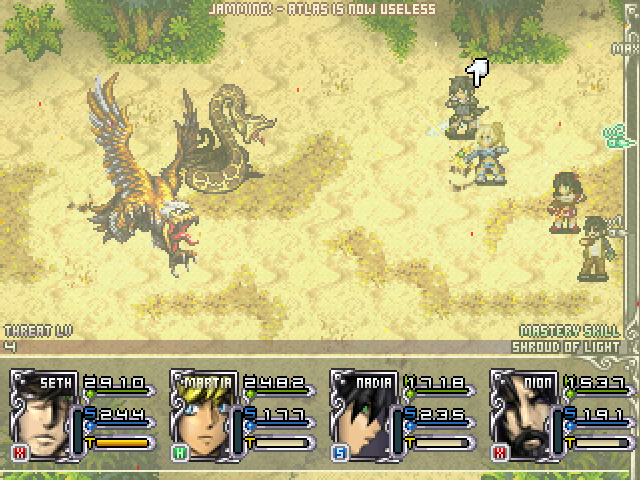 THE END... and beyond!
I won't spoil the fun of playing this game, so I won't tell you more about the system, the story and the characters, as this is something you've to experience directly. I did have fun, difficulty was balanced and I was forced to play this game to the end and... beyond! (surprise, surprise). Despite a couple of untranslated parts (that will surely be corrected soon) and some aspects that I did not like mainly for personal taste (for example I miss walking freely around on the map, instead of selection directly your destination), I can say that this is surely one of the best Rpgmaker games I played, as, I've said in the beginning, it's exactly what I expected from a Jrpg. And that's a lot of content, sure.

Close
03/22/2019 04:09 PM
Thanks a lot for the review! I partially agree with the bad choice of the fixed parties. It's true that you can't play with different strategies and members during most part of the playthrough, but I made this choice story-wise XD
I wanted to take a different path from Fifth Era and Tales of Banalia because I wanted to give space to every character and to do so I splitted the parties to go deep within each character's personality and stuff.
But it's true that I should've given more freedom from earlier. I guess I'll do better next time! ; )
TheRpgmakerAddict

author=LolloRocketDiver
It's true that you can't play with different strategies and members during most part of the playthrough, but I made this choice story-wise XD

Hey don't worry, when I have to look for a defect I tell to myself "what I would change? What would make me like this game more?" Well this and walking on the main map (since I'm old I like oldschool gaming hehe).

Ok, seriusly, the game is big and there are LOTS of characters (most Rpgmaker games have just barely a full party!) so it's normal that every one of us has some favourites and/or those that we can use better. The problem was especially one particular combat (I won't spoil but there one useful character, one inefficient character and one useless one... ) that create a sudden difficulty spike (and I think I was able to prevail just because of luck), and the problem is that the last savegame was before a looooong dialogue.

Heh. Probably If I could have chosen a different team it would have been easier, but it's ok as I won, it was doable. Maybe I'm bad using certain character types.

author=LolloRocketDiver
I wanted to take a different path from Fifth Era and Tales of Banalia because I wanted to give space to every character and to do so I splitted the parties to go deep within each character's personality and stuff.

That's perfectly understandable, clearly some scenes would have not been possible with a full party on the location, anyway I think that, for example, in Fifth Era there was no need for this: there were still parts in which you had a limited fixed party, and each character's story and character was well presented (Gravil & the rebels, Jun and her sister, Gaia's past, etc.), in fact I think that the thing I liked a lot was that there the protagonist was not the "Chosen one" but just one of the team that happened to become the leader.

author=LolloRocketDiver
But it's true that I should've given more freedom from earlier. I guess I'll do better next time! ; )

I'm looking forward this, so I'll give 5 stars! ;)
Faenon

Close
05/08/2019 03:05 PM
Very helpful review. Looking forward to playing this game some time this year. It's criminal it hasn't had more downloads from RMN!
TheRpgmakerAddict

author=Faenon
Very helpful review. Looking forward to playing this game some time this year. It's criminal it hasn't had more downloads from RMN!

I admit I played and finished the original version in italian (both at medium and hard difficulty settings), including the bonus parts, but I guess there are no big changes from the english edition (that I played to test it, but not fully as I already finished the game twice!).
It's a great game as it was the Fifth Era we mentioned before (older and simpler but still good).
TheRpgmakerAddict

Close
12/12/2019 09:55 AM
To celebrate my most viewed review of the year I post a screenshot of the Super Secret Ending of Theia the Crimson Eclipse, limited edition! :P 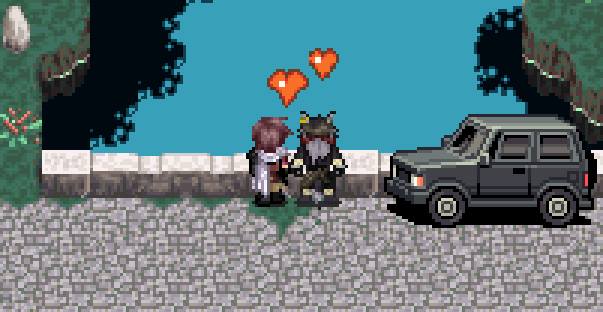