I suppose it's a bit soon to be doing a progress report considering I just made the halfway-done announcement. So this one might end up being a bit on the short side.

With half of the game done and complete, I sent the build out to a couple of playtesters who helped me find (more than a few) bugs and provide feedback on the game's direction. All in all, it was relatively painless, with the majority of bugs found being very easy to fix and mainly consisted of typos in the dialogue. I'd say the only major thing that was found was a minor contradiction in the story if you had taken a particular path.

About the paths: they're quite the little buggers to program, with more important cutscenes having up to four different variations depending on the decisions you have made throughout the story. However, unlike many games with paths that get "locked" early on, you're given multiple opportunities to put yourself on another story path and the earliest you can lock yourself into one isn't until past the halfway point. Think of how in Undertale, you can put yourself on Neutral if you're doing a Pacifist run and decide to kill something. It's a little bit like that, but not quite as flexible as just going to kill a random doofus.

Anyways, I have to account for a number of different combinations of what the players decide to do. keeping track of all of that isn't easy, especially now that I'm starting work on the fourth dungeon where the branching storylines become more apparent and complex.

The playtest also proved fruitful for game balance, which was a bit odd in some places. One dungeon had players in combat too frequently, so that was toned down a bit. I've also balanced things a little better to suit different play styles: everything should be in better tune for both players who want to grind a bit, and for those who just beeline to the end of a dungeon.

After the playtest, a major decision was made to change up one of the game's areas to be more of a hub world where you teleport to different "stages". Soma Spirits' storytelling has always been episodic in nature, where you complete an area and make a key decision at the end of it. However, the setup I had before was very anti-climatic and consisted of just a big, mostly featureless map that used the same tileset as the forest and connected to all of the game's dungeons.

So I spent the better part of my weekend revamping it, making it a hub world with teleporters, with its own tileset and unique music. Take a look: 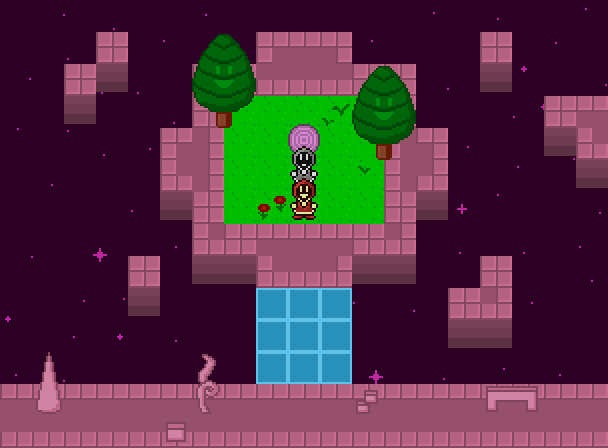 So what's next? Finish up the rest of dungeon 4 and just keep on truckin' along!