Three Ghostly Roses is a 2-3 hour long RPG focusing heavily on battles and the mystery of finding out the story behind what you do. It has a great sense of progression, a touching story, a simple and well-thought-out battle system as well as a manly protagonist clad in pink (well, a little bit).

You start out in a terrible, terrible place. So terrible, anyone should want to get out of it, but somehow you wound up staying there anyway as a "Dweller".
You face a mysterious mystery of who Edmund Brigham (that's your name, you will always be called by it) is, or why he is here, "guided by his fist".

I admit the start is a little slow for my taste as it takes a little while for the story to pick up, but just as I was getting a little tired it really did kick in and I was engrossed into the rest of the game. On the plus side, this time frame lets you become used to the combat system in place and prepare you for all that is to come.
You also get a huge serving of stilted mystery, which is as charming as it is worthy of getting used to. (like the name-thing, "What can I do for you, Edmund Brigham?"). 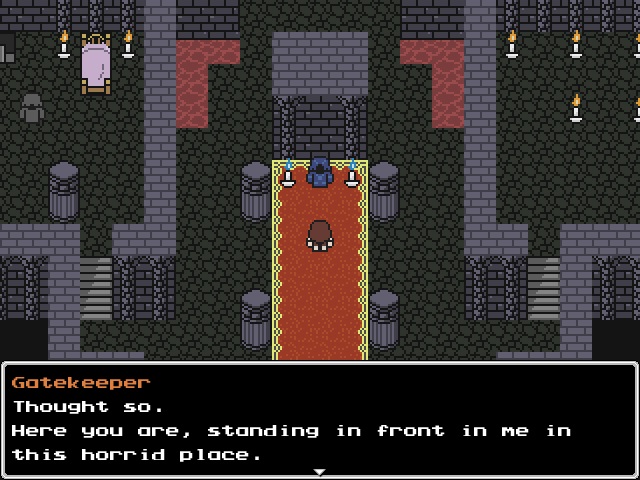 There are a few typos, but I kinda like it too..

You start amnesiac and in a castle of sorts that serves as your center of operation, with an inn, teleporters for later, the one and only savepoint as well as a chamber filled with a collection of red robed guys you pick up from the roadside. For some one-time money they will give little pieces of a story and also have different tunes to listen to if you so desire. I really liked those tunes! They had a strong dynamic compared to the heavy general overworld theme and suited the storypieces well to give them a sense of grandeur.

You then venture out into this foggy world to find something, guided and accompanied by the Gatekeeper (your savepoint) who kindly helps you out and warns you if you are about to get yourself killed needlessly. You can try ignoring him though if you like.

So you heard our protagonist is guided by his fists and a badass. You didn't? Well now you did. He has a real fighting spirit.

Battles start out very simple and then layer a few things on top of those, but the standard layout always remains the same.
It has a wonderfully smooth animation and reaction frame so battles feel satisfying and fast-paced (thank the heavens!). Battles themselves are short.

Different enemies are weak at different parts of their body (like "head" being the weakpoint of huge eyeball-things), and some you can just hit normally just fine. You may call those health-potions, because every kill restores some health and nothing else will (other than the occasional inn visit late in the game).
There are also a few enemies weak to magic instead.

To use those specially-focused attacks however, you need to have at least 1 FP, firepower? funpoint? feverpunch?
You gain 1 at a time by either defeating or normally hitting enemies (so no spell or special technique), you can hold 5 FPs at maximum and you will always start the battle with zero by default.

Now, the way this game executes this well is how you need to focus and take out as many enemies as quickly as you can as the numbers you will face soon be a problem. So you will take out the weak potions with your normal attacks to then have FPs to use on the other ones.
The charm of this system is more akin to the elemental system of SMT and the like, in that you need to quickly guess and memorize the different weakspots of enemies, failing to do so quickly can lose you the fight, or bring you to danger in the coming fights and prompt you to find some healing with weaker enemies or an inn (especially later on in the desert area).

Even if the idea is always the same and easy to grasp, you still are kept on your toes needing to plan out your turns to most efficiency.
Eespecially as later on you gain 2 to 3 actions per turn, and need to plan ahead and chain them well together, as you use those actions all at once and need to have enough FPs at the start of them to select those spells/special arts. So you may first just attack random enemies to get some points in your first turn, then in the next turn use a mass attack to take out weak ones and - knowing you get another FP per kill - then shoot out the next big attack on a remaining guy.

Keeping that memory and guess-work well is key. Most times you can guess the weakspots by looking at the sprites, and other times you need to try out a few things first before you know what's up. I feel it becomes a little cluttered towards the end as you gain a stronger set of spells, and will almost exclusively use those, but it also gives an alternative and means to save up and plan differently.

Bosses are different, as they change weakspots and aren't always vulnerable. This is indicated by flavor text and you need to adjust and read it properly to use it (it only appears once per change, but is highlighted to empathize its importance). Similarily, while it isn't the most difficult or indepth approach, it keeps you on your toes and demands your attention to use the opportunities you have.
I found it a very fresh and satisfying approach to achieve this.

Combat becomes a little same-ish towards the end as it was best to save up for your super attacks, and you simply get very used to the system and enemies you already know, but it did not overstay its welcome.
The only time I died was in the desert area as I just wanted to charge ahead but hadn't immediately guessed all weaknesses (so was fairly low HP) and died twice closely. To then redo things, whoops..

The story comes in two parts - one is about the world and its inhabitants, the small patch-like areas, and especially the Gatekeeper.
The other one is about the life of Edmund Brigham, some family issues and memories. It is part remembering and part creating new moments.
Now, excuse me for but a moment *runs off to do a Edmund X Gatekeeper drawing* 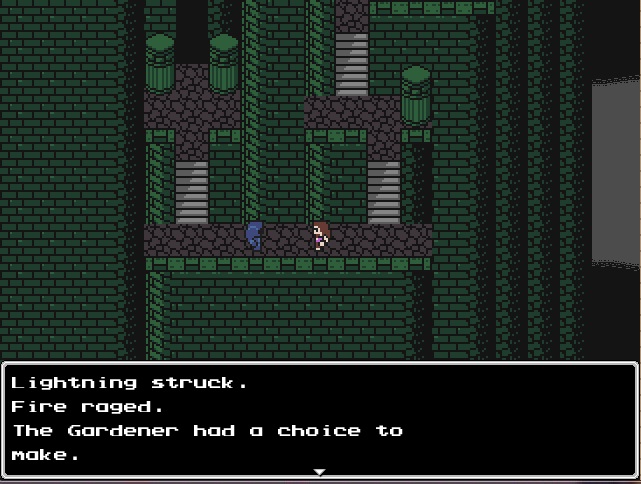 Do you have a choice, Edmund Brigham?

I found it a stark contrast, as the dialogue style of the inhabitants is stilted for the most part (you have a majority of robed guys doing this), of small stories without context in their own areas, and the other dialogue a little strange or trying to imply some sort of insanity.
While at the same time the actual story of our protagonist is very realistic, sweet and heart-warming. There is a strong bite and determination in how he faces all this, and also a strong sense of responsibility for what he did (which was made a topic and resolved itself as well!).

It unfolds naturally as well, and while you can make guesses, you can't know all that's to come. It doesn't strive to make everything perfect, but it gradually lightens, as events kick into place, your power rises and even the music picks up along the way.

I really adore this sense of progression, reaching new different places that are beautiful in their own way even though they carry a depressing message with it (like a dead Garden Tower), and I find the music did a great job of adding to this overall feeling in a nice variety of tunes.

I was really close to tears towards the end, surprisingly, and I really loved the direction of this game in this lovely mix.

The aesthetics share the same dualistic vibe, with dull and drab scenes (the first overworld tunes are like that as well), but also beautiful corners. I found the world a little too weak to make an impact early on of this whole insanity and "terrrrriiiiible terrible place", as that only made sense towards the end as more explanations and sights came to it. It wasn't the highlight, and it would be strange if it was in this context. It was something you needed to go through, and little else.

It's an original art-style and while the linework is a little rough at times, it makes for a pretty aesthetic.
The enemies also looked their parrt and all got their job done to create a variety of humanoids, animals, and weird things to fight.

This is a layered fascinating and enjoyable game in all its aspects.
I found it a little slow-paced towards the first half of the game, but it picks it up well to engross you in the story and keep you invested and enjoying it. And while it does strive for a more depressing atmosphere, it did well to balance it out and make it out to be more than that.
I can wholeheartedly recommend it.

To use those specially-focused attacks however, you need to have at least 1 FP, firepower? funpoint? feverpunch?

It's funny because it's called Focus Points haha.

Thanks for such a wonderful review! It was a great read and I also much appreciate pointing out what you didn't like or what you felt at a certain point. All that helps a lot.

I'm glad you really enjoyed it in the end, especially as much as you did! I was very careful about the mood one feels as the game progresses as I even mirrored it in the music. It starts doom and gloom but I'm glad Edmund's story proved to be something more for you. That was my intention haha.

And as for a few typos, there is that garden tower scene with a few, and some I missed perfect screens of me thinks.
Show
just before the one used, transformed was mispelled.
Box after those two had "he chose wisely, for saving himself were impossible" - was instead of were

You are very welcome <3 I am glad you appreciate it. And yes, the sounds design especially made it so poignant. Sounds goes a long way!
And there's just so many small touches that make it refreshingly realistic, while still remaining positive.

Show
I also really like how Edmund was urged to stop beating himself down for what happened.