Not one, not two, but THREE g̶h̶a̶s̶t̶l̶y̶ ghostly roses!

Hello!
This game already had a lots of reviews, sure, but with so many different ratings that I wanted to try it myself since I missed it when it was first released in 2016. This is a solo story-driven rpg, but snyway what is this game about?

Without spoiling the entire story, we play as Edmund Brigham, a man who has amnesia and he finds himself in a strange place. Is this Hell? No, that's not so bad! Heaven? No, it's not so good! Purgatory? Nah, that's another game... in any case our hero is stranded in a place populated by other humans, strange hooded figures and also... you can guess it... monsters! Here he soon meets a robed man called the Gatekeeper that seems to be the leader of the hooded men, and warns him of the dangers of this strange place. 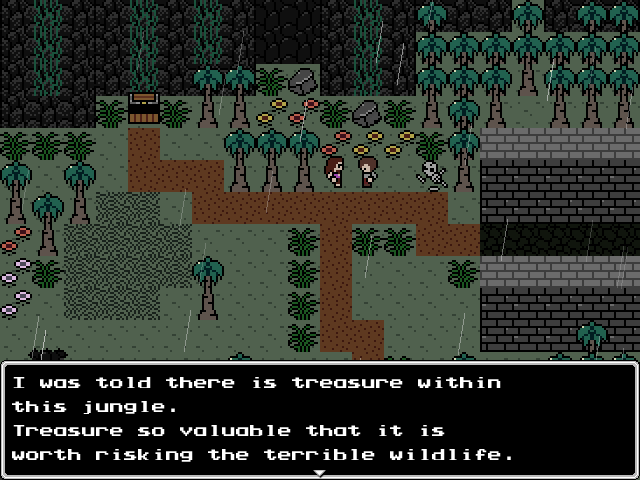 Uh, I guess that the remains scattered behind you would have said the same thing!

But our lost friend Edmund is no stranger to action! He just forgot most of his abilities tha will be remembered during the addventure, since he is a Master of the Way of the Fist. And this is where the game shows some unusual features:

First there is no inventory, no equipment, nothing! Forget to hoard potions or to buy deadly weapons and heavy armors, because there are none. And our protagonist doesn't even need them (well one potion or two would have been useful here!). To heal there are only thee methods: the first is killing enemies (but it restores a small quantity of health) the second is opening some chests (that are no different from those who contain gold coins and restore a variable value of health) and the third is paying someone to rest in a bed and benefit of a total restore. 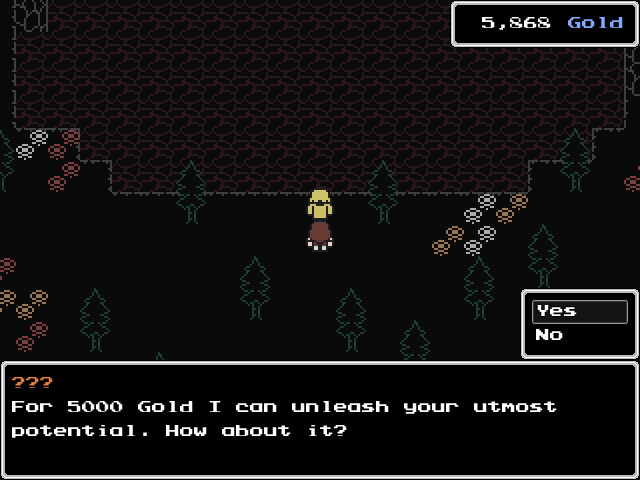 Eh... looks like I have the money, so... I WANT THE ULTIMATE POWER!

Second weird thing concerns combat: each opponents has the body divided into three zones: upper, middle and lower body, and usually the enemy has one weak point (not always because some weaker enemies are weak to every attack!): for example a warrior with a full plate armor and no helmet would be damaged only by uppercuts (that hit the upper body part). If instead there is a message like "The enemy advances using his shield to protect his body and face" (this is something that happens with bosses since they change stance during combat) you should probably attack the lower part of the body! Yes, in order to win you have to figure out and remember each opponent's weaknesses.
Later you will also learn some magical attacks (I hope don't have to specify that some enemies are weaker to these kind of attacks!) and stronger versions of the base attacks and also other special strikes designed to weaken the opponent's defense.

Apparently this is a great concept, I liked the idea even if some parts were a bit hard because of this. I mean, you have to figure out the weaknesses and strike them as hard as possible, the problem is that the special moves require the expenditure of some special FP points (FP... Fighting Points?) earned hitting the enemy with a (weak) basic attack OR killing an opponent with any other attack. And these moves require one or more FP points, so it is necessary to calculate the moves (especially later when you get more attacks during the same round), sometimes perfectly or the opponent will kill you (remember, no healing skill or potions!) if you just made one mistake! There is also just one resting place and save point so sometimes you need to walk a lot just to be safe to be able to face next combat (lucki1y there are some useful teleports that makes backtracking a bit less annoying).

What about the rest? Well the game is a largely linear story about a broken man haunted by his past and lost in a weird landscape. The number three returns several times during the game (like in the classical faery tales, this in fact has a style and narration that reminds of these old stories), three are the roses and three are the territories (the tower, the jungle and the desert) that have to be explored before the last ending part, three are the optional bossfights (well one is not optional at all, but it's still a boss not directly related with the rest of the story). 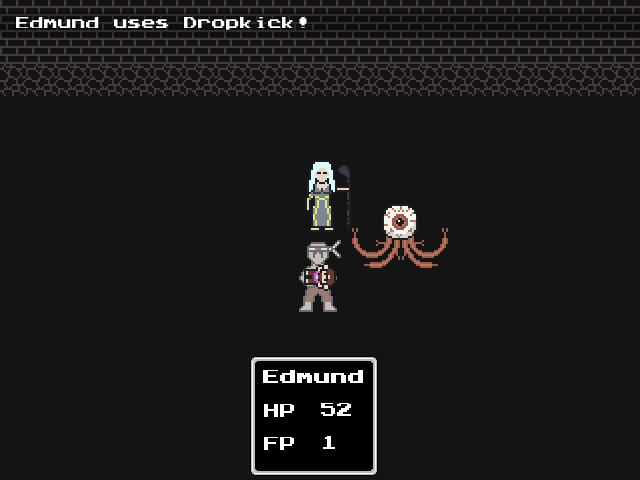 A minimalistic interface that works well! A dropkick is more than enough to kill those martial artists, but the enemies behind require other moves!

During this game half of the time is spent fighting enemies and the second half is spent exploring some really nice maps, looking for money (used to buy some skills and special quest items, and pay for resting), keys and some particular characters. I like how in some maps you can find some ropes that enable shortcuts in order to avoid those enemies who do respawn. Most do not, so once killed you can always run around without needing to fight the same encounters again and again... BUT if you really wish you can fight those that respawn even if grinding is not reqired at all (you earn little experience from them and you also get plenty of gold from the chests, so neither loot is a necessity in this weird world).

A lot of time is also spent reading dialogues and watching cutscenes that tells the story of Edmund Brigham and these three roses, telling something about this weird place and its inhabitants. I won't spoil, but it's an emotional and dramatic tale, and I liked that, it was very mysterious and evocative.

Graphically the game uses old minimalistic styled NES graphics that are simple but they works very well, I especially liked the design of some bosses (like the Lovers) and some maps (the Jungle especially). The music well complements the dark colors of the landscape with sounds and eerie music that accompany the lone protagonist in this gloom adventure. 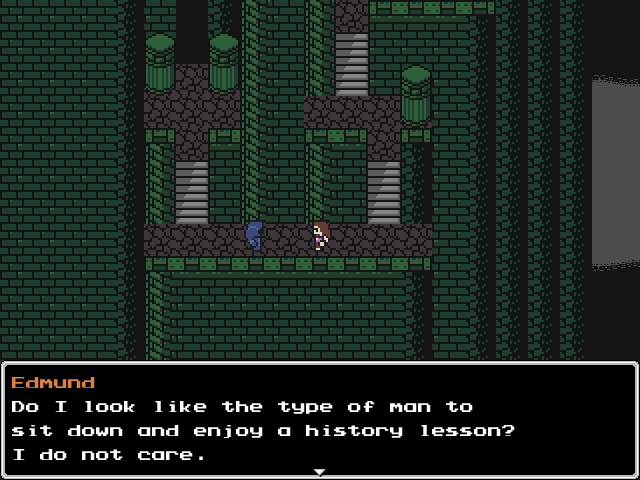 Come on Edmund! Be a bit more cheerful! Now the review is ended and we just need the...

Final Verdict
Three Ghostly Roses is a well made linear adventure that will take about three hours to complete. The story and the narrative is great, the story unfolds before your eyes and you will clearly progress to learn more. The combat system is unusual but pretty good even if the lack of save points and healing spots forced me to make long trips just to be sure to win next combat encounter (or I'd have lost all my progresses! NOPE!), because yes, there is no save points before bosses, but these are the easiest enemies since the description of their actions clearly indicates what you are supposed to do! For normal enemies you have to figure out yourself just from the pic... or making some tries. But later when you fight tons of them at the same time you should remember your previous encounters of course! And sometimes one mistake means death (especially when some have the ability to steal FP points or even make special skills unavailable for some time)! You have just one character after all, not a party that can support you when in danger (and no portable heealing). In any case these questionable design choices aren't too bad, they are very old style! This also stresses the feeling of loneliness (and desperation) of the game world.

HINT!
Show
The maximum FP points Edmund can have is 5, but later, when you have three attacks you can technically chain your blows: for example if you have all 5 FP points you can attack with a moves that cost 3 (5-3 = 2 FP), hit with a basic attack to recover 1 FP (2+1 = 3 FP) and then use another attacks that cost 3 FP points. You are probably techinically not supposed to do this since you cannot select moves if you do not have enough FPs, and you lose that action if you do not have the FPs required (at 5 FP you can technically select 3 attacks but if they costs 3 FP only one will be done, if 2 FP then just two... FP left aren't lost but you will lose the actions)


Even if there are some extras and optional choices I think that the game is largely linear, but it's pretty good indeed and I appreciate the original features presented for what concerns the gameplay. Maybe this is not a kind a game that everyone will appreciate and complete, but it's a polished and very good adventure.