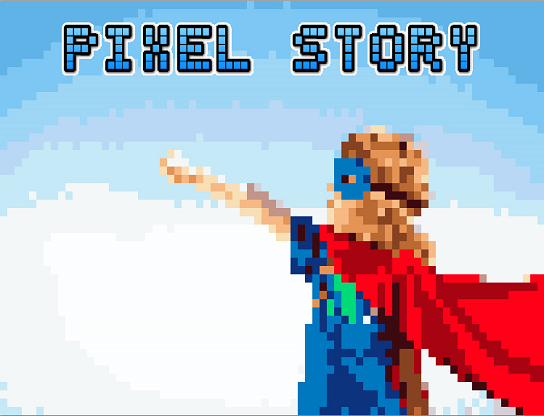 Pixel Story is a visual novel made in RMVX Ace with a focus on absurdity and humor. The demo version is short to play through, but deceptively long in the number of things you can do within it. The design is simple, straightforward, and meant to keep you coming back for more.

As the title may suggest, they’re pixelated. I’m not sure if all the assets have been custom made or if some are borrowed, but the art style varies somewhat. Things are generally represented in a minimalized way, but the scale, detail, and accuracy of each image varies. Being constructed of huge pixels is the one unifying aesthetic. What we see is limited to backgrounds and objects/entities that are revealed when we encounter them.

The game doesn’t use sound effects much unless a joke comes across better with one, and there are only a few music tracks, but they’re suitable enough. Each location you visit has its own BGM, and the rest of the music is for the title or game over screens. With only two areas in the demo, it’s reasonable that the soundtrack is not extensive. I found the songs enjoyable and catchy.

As a visual novel, you’d think there would be more to this, but that’s not the focus of the game. It’s all about humor, so the story isn’t very coherent and depends more on what you discover than any organized plot points. You have no idea who you are, what you’re doing, where you’re going, or why.

With no proper story elements in place, it’s up to the strength of the writing to carry the whole thing. Luckily, it’s written well enough to keep you amused. The jokes are mostly absurd or situational; occasionally slapstick or off-the-wall random. It feels like the kind of game where anything can happen at any moment, yet still manages to make a bit of sense, however tenuous.

This game is centered entirely around dialogue trees and game overs. The intro sequence sets you up by answering a few questions that probably aren’t relevant to anything, and then you get a save at the start of each section from which you can begin seeking your way through. The trees are pretty extensive and most options have multiple branches, so you have a lot of digging to do if you want to see every outcome.

Fortunately, there are multiple ways through each scenario, so not every wrong choice is the end for you. The next location is always the same, though I don’t know if that will stay true in the full version. The means by which you advance doesn’t matter; one success is as good as another. As for the other possibilities, there’s some variety to them. Not every game over is a bad one, though they are most common. Finding creative ways of getting yourself killed (or kicked out of the narrator’s office) is part of the fun, but there are also ‘good’ game overs that preemptively end your quest in a positive way, but you still have to start over, so they’re functionally the same. Least common are the neutral outcomes that put you back at the choice menu, which can be nice since they skip the rigmarole of resetting.

That said, it’s kind of a pain to investigate all the options in a given section. Because the trees can be so lengthy, it’s difficult to remember what you have or haven’t checked unless you actively keep track or explore in an organized way. There are also long pauses when approaching things you encounter, so it gets tiresome waiting for your options to show themselves when you already know what you want to choose next. This is further exacerbated by the fact that a game over puts you back to the first branch of the area’s tree, and there’s no way to backtrack if you choose something by mistake. I don’t think having to start over is that big of a deal, it’s only a problem due to the other contributing factors. The game over sequence is also long on its own, but at least it can be skipped by pressing F12. Perhaps allowing it to be skipped by a regular button press would be more intuitive.

Let’s Wrap This Up…

I’m not sure how large this game is planned to be, but I think it has a decent structure so far. It could afford to be more conducive to exploration in a few ways, but the core concept is fine. Joke games are difficult to write in an appealing way without getting stale or predictable, but this one has done well so far. Due to its nature, I think it might be better off short and sweet. It’s the kind of thing that can overstay its welcome, even if it maintains the same level of quality, so knowing when to call it will be important. For now, it’s a silly little romp that may leave you wondering what in the world may await you. I give the demo a… 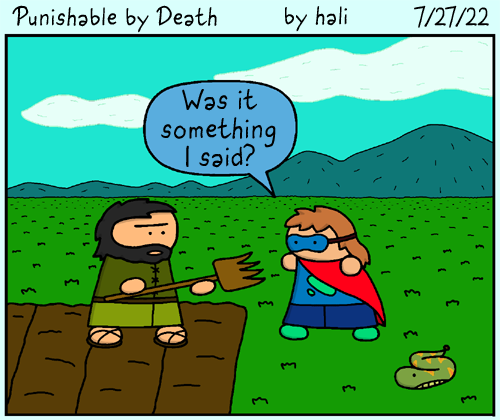 A peasant may see fit to impale you for many reasons.