2 reviews
Save to Dropbox
Since before man, the World Tree has grown. If ever it were to die, all life would end within days. Now, the World Tree has died, and the son of a great warrior has been sent to discover why. Journeying through a fantastic floating world, visit sites that defy explanation, dungeons of inconceivable danger, and meet a cast of fascinating characters.

Dry Fate is a fantasy adventure with a small amount of screwball comedy lightly peppered in.

Ceres: A tree spirit who joins Arvale on a quest to save her tree (not the World Tree, her tree, specifically). 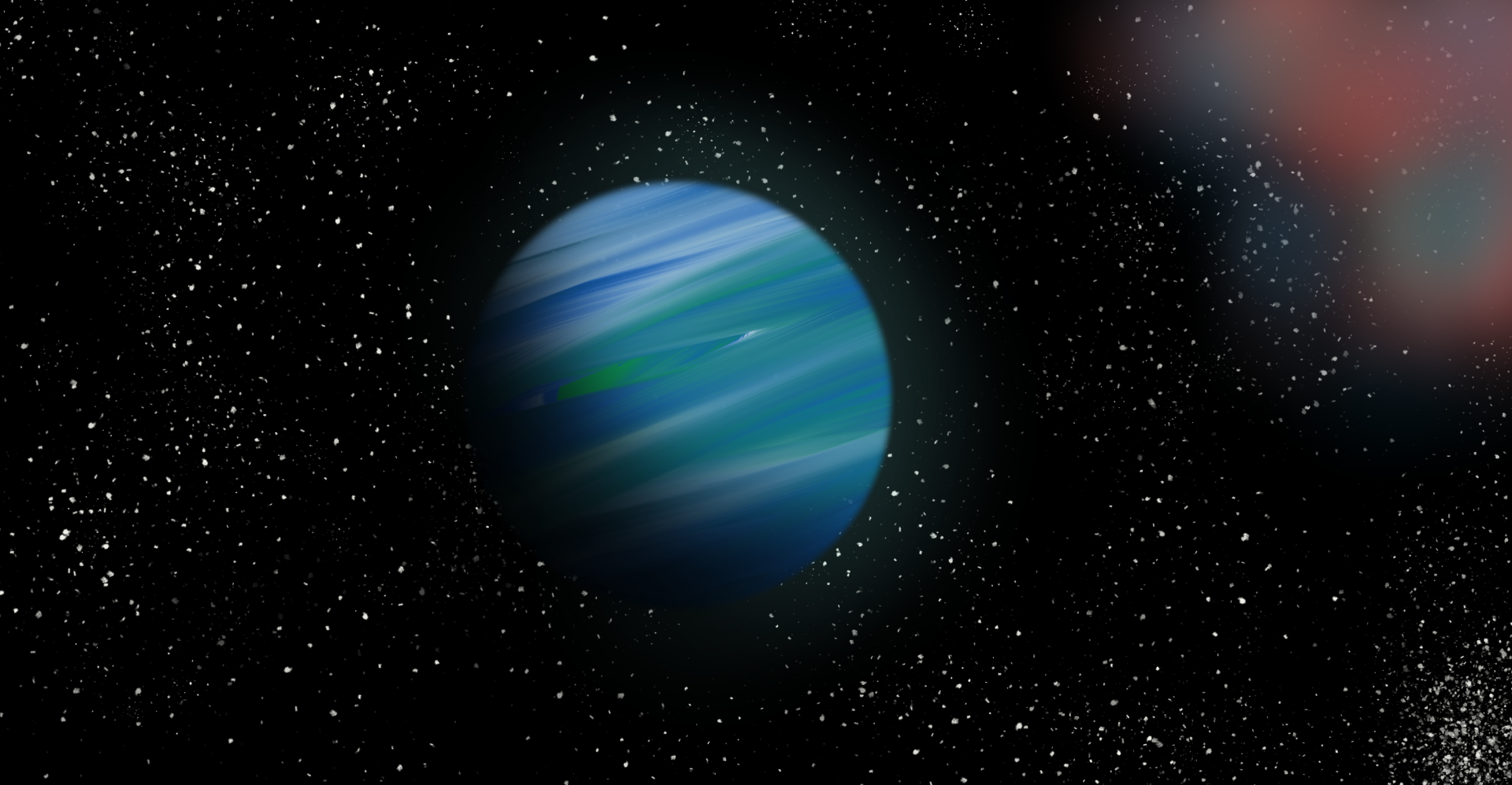 Mayor: He's not a very good Mayor, but he does his best.

Travel by airship to the mysterious floating islands of the land, explore ancient ruins, a deadly volcano, and an evil tower. Who knows, you may find a way to save the world, and maybe even raise the hero's IQ...slightly.

Dry Fate: a game by Frogge and pianotm for the Swap in the Middle with You event.

Ultimately, I'm going to make a version that doesn't need the RTP, but until I do that, here's something that isn't quite as huge to download. I'm not making it the main download, but you'll still find it downloads.

Frogge and I are currently brainstorming an update. It will fix a lot of the problem the game has, include features we wanted to add but didn't have the time, and will add a new area, possibly more.

Thank you to our subscribers, and Frogge and I will continue working to improve Dry Fate!

Close
03/16/2016 12:45 AM
I never knew that a piano and a mere frog could bring things like this to life. My well of puns has unfortunately dried up though. Such a cruel fate.
pianotm

Close
03/16/2016 10:47 AM
Wow piano, honestly judging by those screenshots it looks like you made the game better than I ever could :O Thanks a lot!

author=Description
He's not a very good Mayor, but he does his best.

This is way too legit lmao

Other than that, I actually really liked it. I was actually surprised by the fact that you took the game in the direction I would have taken it myself! I love how you continued the repeated jokes and stuff too XD
pianotm

The concept of lifting lands from the surface up to the sky was brilliant IMO! I can actually see a full epic length RPG use this setting. Good job on that!

I also enjoyed the story and characters. Nothing jaw-breaking, but they were enjoyable for what they were.

Mapping was pretty decent as well, bar the sky area, which felt a bit left out mapping-wise. I also liked the graphics, especially those enemies!

The battles were pretty boring IMO, since everything was basically button mashing 101 (mostly attack). The battles felt WAY too long as well. Since the length of the battles didn't really add anything, everything here mostly felt like padding. I really liked the Skill Quotes however!

I never managed to solve the puzzle in the sky dungeon, so I had to look up a walkthrough online. Due to the fact that the hardest boss in the game is at end of the dungeon, it is crucial that you let the enemies spawn. Since the nature of the battles were basically "power fest", this dungeon makes a possible area for players to get stuck in.

All in all, I did quite enjoy this, despite of its issues. The world-building in this game is the game's biggest strength IMO, while the battles unfortunately end up as the weakest link. If I would add a score to this game, I'd probably give it something around 2-2.5/5 stars. Puns would increase my score.

EDIT: There's a lad named Frogge on Youtube that has LPed your game, guys. I think both of you should check it out if you want to hear more insightful on the game.

Close
03/19/2016 07:16 PM
That's good to hear!
I've always wanted to make a game taking place in the sky. I definetly have a thing for floating islands, hence Skyward Sword is one of my all time favorite games. Fun fact, I've actually thought of referencing skyward sword by calling the island "skylaft". I just ended up leaving it without a name though!
Yeah, I've seen that dude named Frogge's let's play. It was awesome!
pianotm

Close
03/19/2016 07:56 PM
So, I watched both LPs and commented on both. I actually based character difficulty on the number of enemies you were going to fight. Ideally, you'd face Lady Avril at level 7. Ceres' attacks don't do damage to Avril until she's level 6 (that's something I really hate about RPG Maker in general; they all do that shit.). The sky palace should have been grindable, but one of the maps glitched out. You can read all about on the event page. Liberty helped me with it, and we actually found that there's a nasty glitch in one of the World Tiles that seriously screws up the system between different versions of VX Ace. I could have remade the map with a different tileset, but I didn't know if I had the time (at the time, the event still ended on the 18th and I still didn't know how many glitches I would find on my playtest and have to fix). I thought if Frogge wanted to, we could always fix it, restore the map, and put an updated download up after the event. Anyway, that's why the sky palace isn't so easy to grind. You can still grind though by saving and reloading.
Ratty524

Luiishi nailed it in saying that the battles were boring. There are simply not enough strategic options available to the main character and the enemies are very simplistic in their patterns and hardly threatening. This creates a "stall war" where you are just button-mashing/using the same combination of skills every troop and it's incredibly tedious to play.

The dragon boss is particularly the worst at this. Your attacks only deal around 2 damage per hit, and yet you have so many tools to recover from the drag's damage that the entire fight feels like you are just fighting to stay alive for close to around 20 minutes. The entire fire area is quite a difficulty spike from the outdoor areas in general.

Lastly, you have some poor design choices. The fountains placed at the airship ticket station gave me the impression that it was completely blocked off, and it wasn't until I fiddled around to find that you could pass through it. And please, never leave an NPC right near the edge of a map, close to the proximity where a player can teleport out of it. When designing maps, you should focus on clarity, and getting to a spot in the game just to get a measly item shouldn't feel like a chore.
pianotm

Close
03/20/2016 01:38 PM
I'm making some changes to the battle system that probably won't be ready until after the event. I hope to somewhat increase the challenge of the scorpions, vans, and hawks, and increasing the number of battles so that hopefully, you'll be at a higher level when you take on the fierys and the frys, making them less hard. We'll see what the later battles look like once we get a decent level balance set up, but mostly, they seem alright. Basically, I hope to set it up so that as long as you're not skipping too many fights, none of the battles should be too excessively challenging. I'm also making it so that fleeing doesn't erase encounters. Hopefully, that'll encourage players to fight instead of skip. Oh, and Ratty, I didn't initially touch it because it was part of Frogge's half, but after your critique, I went ahead and did this: 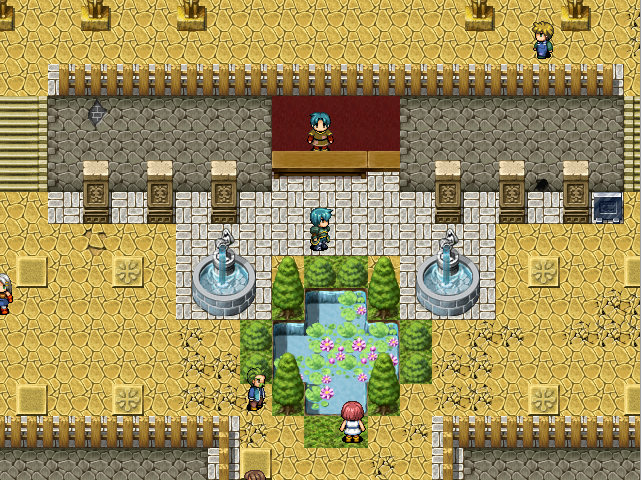 Close
03/20/2016 02:35 PM
Good thing you did. Could you possibly make the bottom sides of the fountains impassable too? Just put two invisible same as hero events. Yeah I suck at explaining.
Show

author=Luiishu535
I never knew that a piano and a mere frog could bring things like this to life. My well of puns has unfortunately dried up though. Such a cruel fate.

@pianotm and Frogge, DAMN this is only the 2nd time I've seen this happen. Your game must be awsommmeeeeeee :)
Off to downloadland.....

EDIT: Started download a good ten minutes ago....and it's only 1/2 done.
I've seen this before with only a few other games, I THINK also MV games.
My computer is a pretty good Dell so I'm wondering if maybe there is
something about MV that makes it take ssssooooooo long :) to finish.