Hello and welcome to a short game made by iddalai in 2016 for the 8th Rmn Birthday, ALONE ... and this is really unique and particular rm2k3 game! First I didn't expect but this is ALSO a community game. Also, because this is the main theme of the game about the frustrations of dealing with the internet and in particular in the forums.

But first how is this realized? Well, in ALONE we play as a faceless shadow inside a greyscale dark and depressing dungeon populated by strange creatures. Just like the internet! some of these... entities... are harmless like the Observers (or lurkers?), others instead are dangerous (like the Anonymous), even if often the damage is moderately low, but ok this is not a game about combat, on the contrary the aim is to avoid confrontation whenever possible!
Yes, because in this game level ups are considered a bad thing (levels are "fatigue levels" and each confrontations ends with the phrase "Exhausting. Move on"), and the best thing that the player can do is running away from combat, since the resources are all found scattered around and are limited, while the enemies respawn! 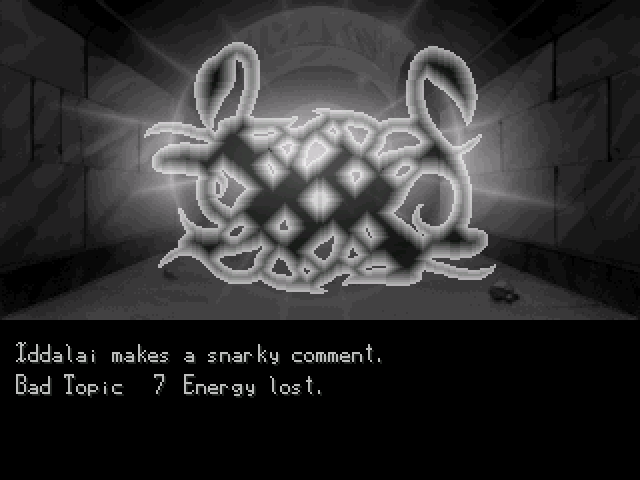 But sometimes (in the cases of bosses especially) it's necessary to face them to progress, no matter how bad may be the esperience. These encounters requires a clever use of the resources found: there are both consumables that can restore Life and Spirit of our alter ego, and also "equipments" (like Joy, Irony, etc...) that can strengthen him or give some powers like the Irony attack or the healing effect of Explain.
The levels in which our alter ego moves are the connected rooms of a dark dungeon, that won't just require exploring the various locations, but also fiddle with switches to unlock some areas otherwise unnaccessible. Nothing complex at all, still worth mentioning since it will mean that it may be necessary to run through again same areas (even if it's a small world so do not expect to do that a lot of times! Not at all, do not worry). And you can also s̶a̶v̶e̶ ̶y̶o̶u̶r̶ ̶g̶a̶m̶e̶ remember whenever you wish!

Is this game dark and confusing? Well, if this is your experience (like mine!) it's exactly what the protagonist/author want to express about life in the cyberspace: this is dark, scary and a confusing place, but around you can still find good things and in the end if you complete the game you will see that not everything is dark, ugly and bad (and I liked the positivity of this final message)!

Aestetically the game is pretty original, using some RTPs, edits and original parts, but the most important thing is the attention to the details (and I love this aspect of the game): abilities and equipments are often abstract concepts, and the sounds of the "attacks" are often mumbling or other eerie sounds (except for Mr. Sandman by the Chordettes at a certain point). Weird, but appropriate to the ideas that the game wants to express. 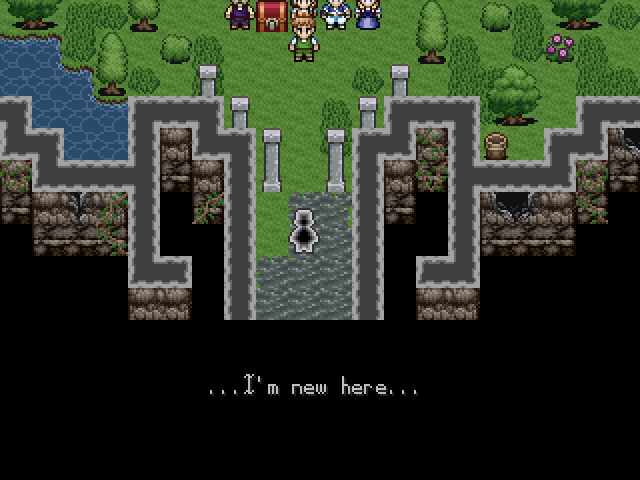 Not all places are ugly and bad! But you have to pass through hell to come here!

Final Verdict
ALONE is a particular game: it's more a sort of experience/puzzles than anything else, since it needs some thinking to be completed successfully. It's simple, short but really clever for what concerns the idea and with lot of attention to the detail for what regards the execution. It's difficult to judge the game since it's not your usual adventure or rpg, but both the originality and message (and how it's delivered) makes this game stand out. Very well done indeed, and rather unexpected.
You can find this game frustrating or interesting, but the truth is that it's both!

I've been away from RMN due to some crappy real life reasons, so I only noticed this now. Sorry about that!

I feel that your review manages to encapsulate all the main features of ALONE.
I'm glad you enjoyed it. I certainly wasn't expecting any new reviews, that's for sure! I guess this is the closest I'll ever be to make an "RPG Maker Classic".

I'm pretty satisfied by how the atmosphere, names of abilities/equipments and special effects turned out! It does give the game a unique feel.

I still have no idea how I managed to make the original concept and event game in only 8 hours... that always blows my mind, specially considering how slow I am at finishing any other RPG Maker projects. I was on a roll back then, I guess.

That time limit was probably what spurred me forward, the game was born out of desperation.

People back then had very diverging opinions about the game and it's gameplay, which is only natural since it plays around with classic RPG concepts and turns them upside down.
Looking back now, it's kind of amusing since the drama that ensued is exactly the kind of stuff ALONE is meant to represent.

It was a joy reading your review, TheRpgmakerAddict! I don't disagree with any of your points, so there isn't much to discuss there. You do seem to have completely grasped what the game was trying to achieve and accepted it as such.

Oh yeah, there's a hidden "alternative quest", if you have a save right after you defeat the last boss, you should be able to find it.

Thanks again for the review and the kind words!
TheRpgmakerAddict

Close
01/13/2022 03:31 PM
Whoa I wish I was legendary lol!
Thanks for the suggestion, I have read somewhere of the "alternate quest" but I believed I had to restart the game and I was not able to find it! I will check that.
iddalai

author=iddalai
For me, someone who made as many reviews as you did (around 340) in such a short time frame, is indeed legendary. Trust me on this! ;P

Thanks... it's a good thing since I started 2-3 rm2k3 games and completed 0! At least I finished something, lol! Writing reviews (and playing games I like!) is fun!
iddalai

Close
01/20/2022 10:08 PM
I think I know how you feel, I started countless RPG Maker projects... but only managed to complete a couple of very small projects.

Still struggling to finish some of the larger ones.

But yeah, you should feel accomplished for writing all those reviews, that's a major feat! Keep on having fun!
Pages: 1