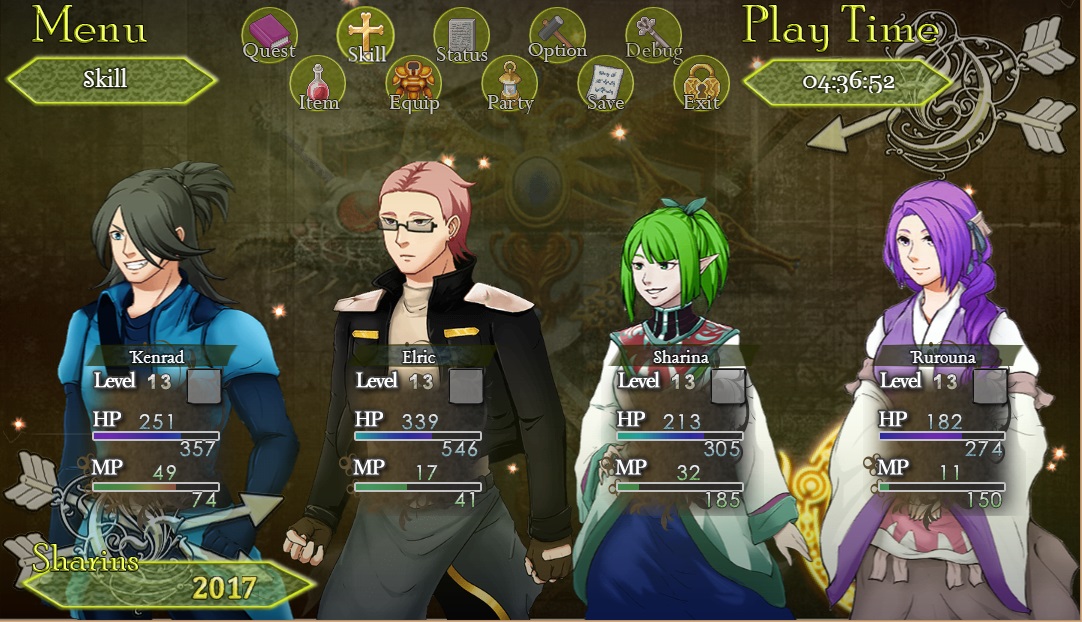 New Eredia Menu (WIP). Looking forward to your feedback and suggestions for improvement.

Close
12/11/2016 04:14 AM
It's hard to read the fonts used for things like Money and menu choices. Why not use the already-fancy-but-readable font used for names? It'd look a lot better.
RishigangiX

author=Liberty
It's hard to read the fonts used for things like Money and menu choices. Why not use the already-fancy-but-readable font used for names? It'd look a lot better.

Thanks for the suggestion, I'll change the font used in the menu choices to a more readable one. :)
Tespy
120

Here are my suggestions for improving it:

- Remove that timer box in the top right; seeing play time isn't feature that deserves to be shown on the main menu like that. Just seeing the playtime in the save menu is enough. Plus, the space you'd free up from that could be used to make other parts of the main screen look nicer.

- Make all the green text in this menu white; they blend in too much with whatever is under them.

- If you removed the timer bar, the text on the menu bubbles should be under their respective bubbles, or at least a bit lower; it looks rather cramped as is.

- Also if you removed the timer bar, you should make the menu choice bubbles and their text bigger. Perhaps spread them out a bit, perhaps lower the character portraits down slightly so the screen looks less cramped.

- I think that's just a glitch, but that zero in the box displaying your money needs to be in front of the box, like the letters on the Menu box in the top left.

- The boxes with the party members' names on them should be a little taller, with the text in them getting bigger to match.

I hope this helps! ^_^
RishigangiX

The problem is that although I can adjust the relative distance of the components, the plugin doesn't seem to have the option to set the distance in between each of the menu bubbles. Hence, I can't make them bigger than they are or make the text appear below them.

Perhaps it'll be better to three letter abbreviations or remove the text completely from the bubbles? When you hover the mouse over the menu bubbles, the command name will be displayed in the left hand box.

I will fix the character name positions and the text color. As for the playtime, I'm trying to somehow put the game calendar into the menu but it's not working out that well. Until then, I'll be keeping a simple playtime display.
Tespy
120

Understood about your other points.
RishigangiX

Close
01/04/2017 01:56 AM
Thanks for the suggestions. Currently, I've kept all the text, but changed them into more readable ones. The screenshot has been updated to reflect the changes.
Tespy
120

Close
01/05/2017 04:44 PM
Looks much better! The only thing I would change is make the sharins text on the bottom left (both in and out of the septagon) contrast more with the septagon they are on. Perhaps color them gold, since sharins are the currency.
RishigangiX