A secret agent tasked to assassinate the prince.
Vadris:

Also: The shops aren't working properly. The effects of items/equipment aren't shown.
The buy field for the items is too small (1 tile set above and under).
Weapons/armors are usable with everyone, but some with none (the best swords!)
When equipping only the effects of the equipped weapon/armor is shown. You have to leave equip to actualize it.

Even with increasing level/weapons the damage to the enemies won't change (i.e. snake: normal attack 21-31, special 60-80). MP won't increase, too. You have to use special attacks for the 2nd weakest enemy.

author=Firefly84
So far so good, but I'm stuck in LV8 (Brr) after the merchant tent. I think there's a block stone missing to stop my slide. That's why I can't reach the next switch (the left one after hitting the right).


You do not need to flip that left switch to proceed to the next level. Just go down the stairs to the right and then go down until you see an open left path (if you hit the right switch) and continue right from there until you stairs to the 9th level. The left switch is just used to open a shortcut, but I guess I didn't see that you can't get to that switch.
Firefly84

author=Firefly84
Stairs? Haven't found any stairs. and I tried every possible ice slide.


Here's an image to explain it better:
Show 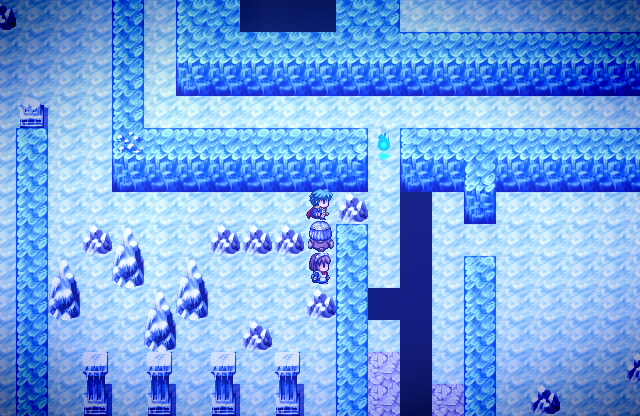 The rock that I'm facing isn't present in your screen, so I think this is not beatable?

Anyway, this game is pretty "meh" so far. It has some great concepts, good dungeon design, and cool features, like the fog of war and menu system, but it's all dragged down by its lack of variety, especially in its encounters.

You encounter nothing but the same slime and the same snakes for over, what, 7 floors!? Even areas like the fiery dungeon, which would demand a change in theme, uses the SAME troop encounters as before. Come on, bro! You both have better creative brains than that! It contributes to how boring this game is overall because the same challenges that you can easily overcome are presented to you over and over and over again.

Speaking of the battles, they suffer greatly from "FF: Mystic Quest" syndrome. All of your available tools are barely significant enough from your basic attacks and enemies pose very little threat in general; you could get away with just mashing the "attack" command just as well as you can get away with spamming skills, and the punishments you receive for either playstyle are not significant enough. I guess this can make for mindless entertainment to those who are bad at RPGs, but it's so devoid of strategy or depth to the point of unengaging for anyone looking for a challenge.

That said, the point where this game actually changed stuff up is the ice cave I just mentioned, but here the enemies are almost SO threatening that it feels like a complete spike.

Other than that, I'm not a big fan of the resolution changes because all it seems to do is scrunch up pixels and make everything on the screen look kind of ugly, and as Firefly mentioned your shops are bugged in the sense where the quantity information is out of position, and the first thing you see when talking to a shop npc is just a blank box with nothing in it, leading you to believe that the shop sells nothing. There aren't even displays to show you what weapons/armors are beneficial to what character, which makes buying the best equipment a complete guessing game.

So, me not figuring out the ice puzzle might be one thing, but this game is quite flawed.
Rhyme

Close
03/21/2016 01:10 PM
That's likely due to my fault:
I did not provide much aid in setting up the project, and I had to be MIA for approximately half the event, which caused me to not respond to any questions Zero3D had about how my first half was made.
It's notably mechanically different from the standard RMVXA project and I think it's due to the lack of explanation I had bundled with my half.

Also, press F5 to full-screen and F6 to resize the window!
Ratty524

Close
03/21/2016 05:54 PM
Interesting, I've been using Alt+Enter for my fullscreen and it alleviates the resolution ugliness to an extent.
Firefly84 I thought that perhaps the switch is hidden on those hurting tiles - but no.
And the monsters on stage 9 are really powerfull. They can kill me in one turn with bad luck, and I have got the best armor. Level 6 and 2(Mage).

When speaking of hurting tiles. The map is not lightened until the first step - ouch!
shayoko

did she lose her memory too? why doesn't she know where we are?

the status screen o.o shes a spy sent to assassinate me despite not doing so at the perfect opportunity!?
well that's fine i would rather play as her :3

i like how the map lights you as we explore! cool effect!

Arneis will let you save? why would you need that when you can save anywhere? and if you couldn't...
that said the shops are weird its a black screen when you enter the item,weapon or armor shop and they become visible if you press Z/enter one time. you can also press right while its black to switch shops

shops visuals are messed up when buying
no descriptions or stats

all gear does the same thing!?

the floor 5 teleporter does not take up back to fl4

Still working my way through it, will post my thoughts later on. Enjoying a good dungeon crawl.
Novalux

Close
05/16/2016 08:16 PM
Got stuck on the third floor where a staircase in the upper right won't let you go downstairs. Seems like an interesting game though, and i love the UI.
Firefly84

author=Novalux
Got stuck on the third floor where a staircase in the upper right won't let you go downstairs. Seems like an interesting game though, and i love the UI.


That stairs lead to nowhere. Try another way.
The game is playable until the screen hidden in my last post.
Still waiting for an update.
Firefly84

Close
05/29/2016 11:32 AM
Sorry, but your update didn't help at all.
It would have been better to add another switch or key to open the gate and not to delete the gate and the path behind it.
The teleporter is not reacting.

Oh, I had to reload the game in the previous version because with you changing the map I was trapped in the wall. lol
EdgeOfChaos

author=EdgeOfChaos
All of the shops are completely empty for me.


Just 2x Enter and the items will appear.
AkarithePeanut author=AkarithePeanut
Hello! I´m stuck in B9, explored the place but not sure what to do now
Show

You're welcome.
I'm stuck near your place, too (hurting tiles), the last update has made the problem even worse. If you reach the dragon/portal on my image than there's no further way. The image is some post up.
Pages: 1