Short vacation at Sepia Beach: came for the graphics, stayed for the story!

Hello
and, no, Sepia Beach isn't a game about a summer vacation! So what is this?
First: the description says "Visual Novel"and that's more or less what you can expect from this game, a sort of walking simulator with a story that is only partially explained and will surealy leave the player wanted for more!

But first, let's make it clear that this game was realized for the Swap in the Middle With You event, by two designers:
Art, mapping, and characters by Pizza.
Story, events, and finishing by Rine.

For this reason you cannot expect a long, complex game, so you've been warned!

Sepia Beach starts the game with our unnamed character on a beach. He has no memories, and everything around him is sepia-toned, giving a feeling of a lifeless world. Leaving the beach, he will wander a forest, a village, caves... every place is empty except for the presence of bones and skulls on the ground.
And then he arrives at a dark ebony tower, will he learn what happend to the people here?

Ok, I will not say more, clearly this isn't a lighthearted adventure, nor a combat game, since everyone is probably dead. But the second half of the game will give some answers, but not everything will be explained, even if some things are just hinted. That's both a pity but also a good idea because it enforces the sense of mystery and dread of the whole short adventure. 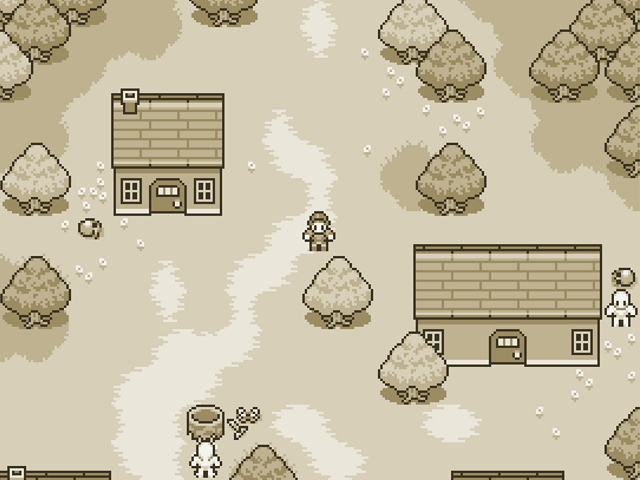 Oh, looks like we are not alone in this sepia world!

Graphically the game uses only sepia tones, but the characters and chipsets are custom and they look extremely well done. Yes, both sprites and mapping are of a good quality, pity for a couple of errors on the words of the three last houses, that have a sort of... force field, since you cannot approach them! Anyway this is the only but of this game, if you can call this a game, or rather a short story, and a visual experience.

The game is linear and can be completed in about ten minutes, there is not much to do except interacting with some things and people, and if you do not perform all interactions required you will be warped back at the beach to restart again (you can also save the game anywhere and anytime if you really want to but there is almost no reason to do that).

Final Verdict
Being this an enter for a contest and a game made in collaboration between two developers in a very short time, it cannot be judged like one of the other games. Anyway, despite the obvious limitation, it's still a game with some charm and the particular visuals attracted me. The dark atmosphere is peculiar, and the graphics and colors are pleasing, but also the story was captivating and left me waiting (and looking) for more. But no, in the end there is not much to do and see.
Still, this game stands out from many others for idea and style, that's sure!