Uncoiled from the start

Jasei No In is another example of a game I decided to check out because it was unreviewed, and also because it is based on a Japanese story unfamiliar to me, and likely the majority of readers. I’m always curious about such adaptations, since I believe our medium provides for plenty of scope to expand and build upon the original text, and enrich our experience of it. So far, however, the one example of this I've encountered on RMN was After Man, SnowOwl’s first game that featured his traditionally distinct artstyle but otherwise reduced the ideas of its literary namesake to a few fascinating descriptions adorning dreary, stakes-free horror. Jasei No In fares considerably better, straightforwardly adapting the story into a “short, linear game” which is solid, but leaves one wanting more.

Not much of it, as might be expected. You walk around, talk to people and interact with things to get what is usually a single-line response, and you also get to save by interacting with the burning lanterns. The latter comes in useful before a timed sequence near the end. That’s about it.

Jasei no In is another one of those games which weirdly lack a menu theme, and allow you to gaze upon its black-and-red menu in silence, besides the “select option” sounds. In the actual game, however, the music is present, and always fits the events in game, generally using traditional Japanese instruments and such, while the track playing during one “outside” section also has a lot of crowd noise included. I should also commend the game for not only including the footstep sounds, but also making them differ depending on whether you move across the earthen ground, on the softer floors, or the wooden pallets. 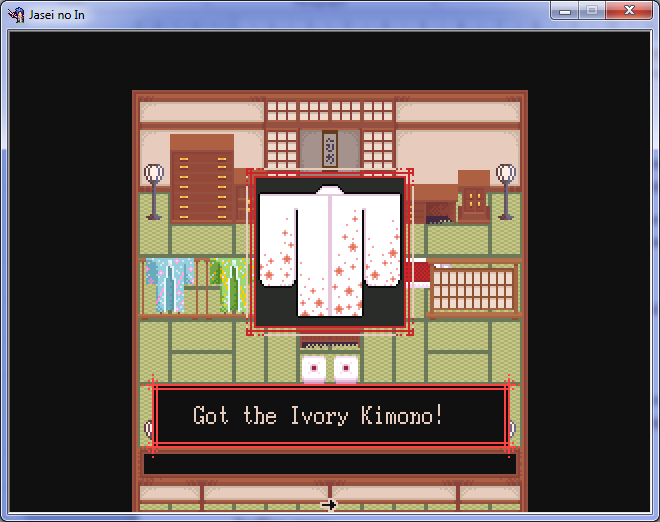 Meanwhile, the graphics are custom, and they all fit the setting well. There’s been quite a lot of thought put into them, as the “behind-the-scenes” room reveals after beating the game. Detailed close-ups of gifts the player character receives at some points look particularly good, and some of the more unique facesets later on are also impressive. The on-map graphics still look a bit plain, however, though that might be due to the rather simple map design, which usually works and looks logical rarely has anything particularly eye-catching. I suppose the bright blue and green kimonos hanging on racks in some rooms are the exception, though they’re counterbalanced by this perfectly straight path through the uniform pine forest: 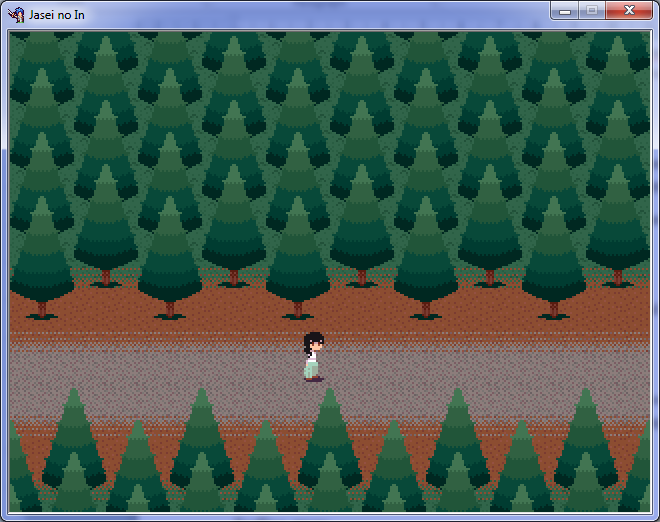 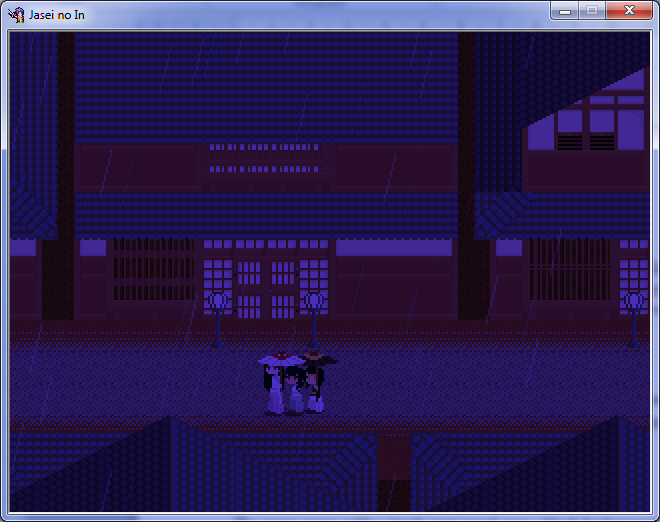 The game opens with a simple text crawl over a black background, telling us about the protagonist, a young woman named Agata no Manago, daughter of weavers so determined to succeed them she barely has time for much else, until one day, she finds herself up caught in the rain without an umbrella, but then chances upon a mysterious nobleman named Hebiwaga no Hakuja, and his female servant Shimahebi. The latter is obviously takes an interest in her, and decides to give her their spare umbrella, in spite of her protestations about the propriety of a nobleman being seen alongside a woman of such low birth. In fact, this concerns her so much that Manago then decides to return it anyway: somehow, it doesn’t cross her mind that a lot more people would get then the chance to see her, a weaver’s daughter, alongside him that way. However, it doesn’t truly matter, because it turns out practically no villagers know of him anyway, in spite of his supposed status, while the visit to his stately manor in the forest 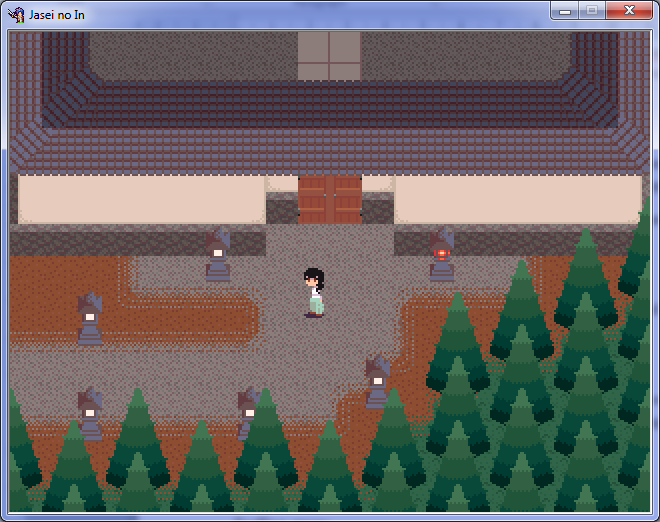 OK, it's not that impressive looking from the outside in.

Goes like a dream, literally matching the contents of a dream she had the night before (the dream itself was again relayed to us through text on black background, a common storytelling tool in the game). Now, this is a short game, and we are already halfway through the story at this point. To say much more would be to spoil it, though I could hardly do a better job of that then the game itself. Its major problem is that the foreshadowing comes in early and is extremely thick, with much of the (pretty good) environmental description, for instance, being devoted to further establish the points that are already quite clear from the start. Moreover, there are very few other details or elements to the plot to distract us away from it, so the most important plot turns fail to elicit not only surprise, but much emotion at all.

It still goes ahead and does something unexpectedly logical near the game, though, after introducing the guards (even if the reason for their presence kinda raises questions about the antagonist’s intelligence) and wisely refusing to end like a typical horror, instead being surprisingly lively (environmental desolation aside) near the end. Interestingly, the aforementioned timed section could’ve been immediately followed by a playable chase scene, but wisely realizing it would backtrack too much and look no different from a typical rmk horror, the whole thing is a cutscene instead, which works better then you might expect. The poetic ending rounds everything off well, and I was surprised to learn from the bonus room that quite a lot of the details were actually changed by the creator (starting from the fact it is apparently a gender swap.)

As is my tradition, here are some spelling errors for the developer under the spoiler tag:

Show
“Hebiwaga House? Sounds prestegious”
“And an heir.”
“Despite it all, despite the forboding feeling she had inside his manor” 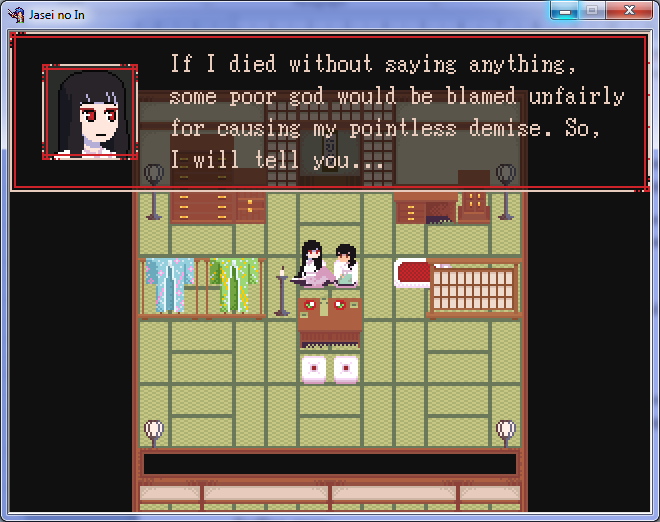 In all, Jasei No In is a decent, reasonably immersive experience if you’re into that kind of thing, and the bonus room provides plenty of good behind-the-scenes info as well. It’s hardly a breakthrough, though, and could’ve conceivably covered much more ground. I suppose a good example to use here in the famous theatrical adaptation of Frankenstein, which took Igor, a character who wasn’t truly present in the original, and worked so well on him that he is now an essentially obligatory part of any prospective adaptation. Jasei No In apparently tried this through expanding the number of manor’s handmaidens, but had to scale it back for production reasons, and it shows. I suppose there’s always room to try another adaptation later, though.