The mediocre introduction to a great saga

Hello, it's me!
I heard lot of good things of Legion Saga and I expected something really good, and I admit that after playing the whole serie I realized that it's a good trilogy indeed, unfortunately the first, the beginning is... acceptable. But let's begin this review:

THE GOOD
Legion Saga is inspired by Suikoden: it's a game of countries at war, soldiers, leaders and combat, lots of combat of course. This is something that makes the game different from the other fantasy jrpg with the classic orphan boy that dreams of adventures. No, here's the hero is a soldier, a simple warrior. The story itself isn't totally bad but not particularly original, anyway it's one of the best things in my opinion, as you will find some interesting parts and missions especially in the beginning. I liked is that the premise of the main quest is rebuilding a fortress and an army and I felt myself involved since there is a TON of characters o find and recruit, some are party members and have different abilities, others are recruitable vendors and helpers. You usually need to reach e certain level to get them, even if some are automatically added to your army as the game progresses. Collecting all of them is the main objective of this game and what I liked is also the fact that a particular character can be lost if certain conditions are not met, so at least this is not totally linear. Another think I liked is that game can be saved when you find a diary/plaque and they are all conveniently placed, they also merge well with the scenario better than the glowing save points. 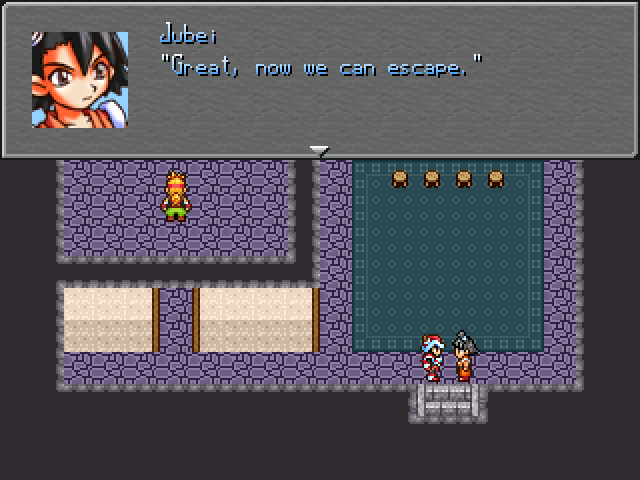 THE... OK!
Everything in this game uses the stock resources of RMK2000, so you will see the charsets and chipsets you have already seen a thousand times. Same goes for the monsters and combat: nothing new, the usual front view combat with no battle charsets. Boring. Ok, yes it works and this is not totally bad but everything is unoriginal, and the problem is not only because of the resources used: characters and party members are all stereotyped and uninteresting, I foung myself wanting to end the game just to be able to start the sequels (that are better in every aspect and presents more interesting characters).
Maps are large, simple and generic. They are not bad but not memorable either, you won't find many surprises exploring them or interacting with items. Again, some goes for writing: it's ok, not bad but nothing that will be remembered.
Even the background is of a dull grey! Ok, it could have been worse, still this screams "boring"! Oh yes I forgot to tell abous the mass battle(s)... it's just one or two, I cannot remember and they work as a rock paper scissor minigame, so it's just a matter of luck, anyway it's an ok diversion from the usual questing. 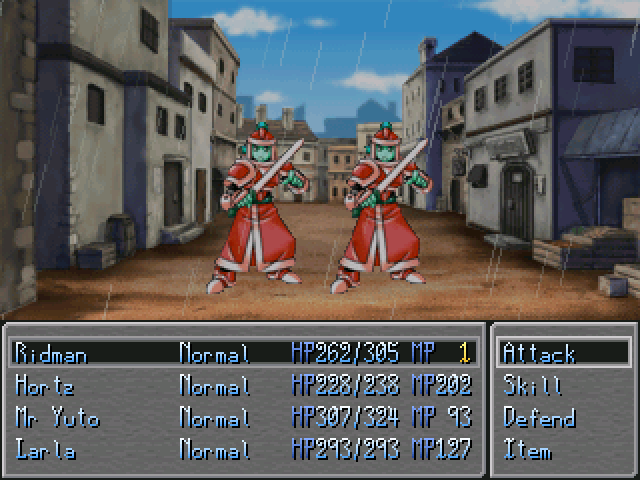 THE BAD
Ok, first thing: the main character walk slowly. No, better, he walks VERY SLOWLY. And considering that there are random encounters this makes walking around a real pain. Given the fact that you will meet always the same boring enemies as you will always walk around the fortress, you'll be bored sooner or later.
I also did not like that I had to farm experience in order to pass certain points as the final enemy was really hard (like the Black Mage), ok that's nothing new in Jrpgs, but the problem is that this makes the game even more boring. It's a pity since the base idea is good, and the storyline isn't that bad but in the end this looks like a prototype of its sequels.

FINAL WORDS
Legion Saga is a bland game that would be forgettable if not for its far better sequels. Many other games with a similar theme, like the russian Warrior Saga or Exit Fate (oh, just a note, Legion Saga 3 has many assets in common with Exit Fate) were a lot better, but this isn't just because they used a wider variety of resources, it's also because they had character. As I wrote in one of my past reviews the lack of resources and the "boring maps" are just a problem. If we add boring combat, boring writing, uninsteresting dull world and uninteresting characters, well then we have many other problems. And it's a pity because the base idea was good but the execution was bad, except for some few moments.

Even if I may seem harsh, I give a 3 just because of these few nice moments and because there are no terrible mistakes like unbalanced enemies or situation that will ruin your game, and there ar far more bad games that deserve even less. Even just a faster walking speed would have been a great improvement, nd if I look at the sequels I see that it could have been a lot better. Pity.
My advice is that you should play this only if you have time and you can and want to play the whole saga. Otherwise you can skip it as you won't miss much besides the returning characters, instead the story of LS2 and LS3 is connected, but I'll talk about that in the next review!