1 reviews
Save to Dropbox
Peace has been upheld by the hands of Maverick Hunters X and Zero for quite some time now. However, suddenly, an uprising of mavericks washes over the city of Monsteropolis and the surrounding region. Their forces are vast and incredible, but X and Zero will stop at nothing to ensure their terror comes to an end! As their mission begins, they notice something odd: all of the mavericks, big and small, have emerged from the past! The enemies that X's predecessor Mega Man fought--Cut Man, Air Man, Quick Man, Gyro Man, and more are commanding the maverick army. But, who is commanding them? X and Zero will continue to fight back in order to find out.

"Mega Man X: Past Rising" is a simplistic, turn-based RPG, with a large emphasis on player choice. In this game, you, as the player controlling X, will venture through 3 different sets of 6 stages each before making your way to the final dungeon to face off against the commander of the Maverick army. Other than the combat, this game's design takes inspiration from the general flow of Capcom's Mega Man and Mega Man X games, where you choose the order in which you want to play the stages. Not only that, but defeating a Maverick boss will allow X to learn a new ability from a selection of 2 or 3 different options. X will be outfitted furthermore with special Addon Weapons you can purchase at the Maverick Hunter home base, Health Upgrades, and more.

(This game does not as of yet have an official title)

I'm in-production of this game again. As such, I figured I should post a blog talking about a few things. First off, yes, I still very much want to completely finish making this game. It's why I took it out of canceled status a few years ago. Of course, with most indie developers, real-life and stress and work and other stuff get in the way and production suffers as a result. Nevertheless, production continues.

Since the current playable state of the game is the demo, let me fill you in on stuff updated since that:

Unlike the demo states, you will now be able to level-up X! 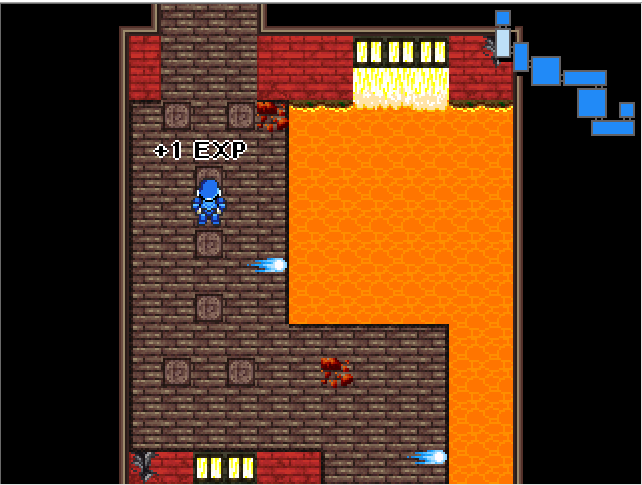 Not only will you obtain Hunter Points from defeating enemies, but EXP points, as well, which is dependant on the enemy's "rank" (basically, what color they are)

The only "natural" reward for a level-up is more WP, which X uses for Addon Weapons and Weapons obtained from bosses. But, X will also be able to obtain an Upgrade Chip from Alia at the Home Base once he levels up. The max level in the game is "5" and there are 4 Upgrade Chips, so you will be able to obtain all upgrades in a normal playthrough. The order you obtain them in, however, is up to the player. Think of the Upgrade Chips exactly like the armor upgrades from the official Mega Man X games: they enhance X's abilities. I won't go over what the Upgrade Chips do here, though; I'll save that for another time.

You'll also notice that the stage in the screenshot above is new: its Heat Man's stage.

That's about it for the moment. I'll probably be uploading more screenshots soon, once Heat Man's stage is completed, then I'll be moving on to more stages.

Until then, Mitsu out.

The game now keeps track of your Hunter Points, which is what you get instead of experience points

Close
01/09/2009 03:30 PM
Brilliant demo, keep it up Mitsuhide! I really do hope you fix that ugly item-charge glitch though. Any luck so far? D:
Mitsuhide_The_Vagrant

Close
01/10/2009 12:32 PM
I've looked into your game and I tried several things suggested across various forums (change all the arrays to 1 for Items, Heroes etc) but it didn't work. Enterbrain IIRC did state that common events weren't supposed to be used in battle and any use of them will possibly result in problems. I'll keep trying although I think I exhausted most of my ideas.
Mitsuhide_The_Vagrant

Close
01/31/2009 08:25 PM
I was gonna give you a pass if you were like, 13, but I just checked your dA and saw that you are basically my age? Jesus dude, crack a book or something so you can see how stories are actually written, 'cus it's obvious your only inspiration when it comes to storylines is Bleach or whatever.

Proofread your shit, man. He 'denoted' a bomb? Wouldn't that make him a hero?
Roy is a terrible name for a villain. It's not just typos either, the entire thing reads like a sixth grader's rough draft. But seeing as you don't read anyway (see below), I guess expecting more than that is unlikely.
This reads like a middle-schooler's Megaman fanfiction.

I could go on, and that's just going from the blurb you posted. Read something. seriously. 'Favourite poet or writer: Probably myself or not sure'? That's an arrogant thing to say, because there are tons and tons and tons of people much better at it than you are

Fangames are mediocre at best; at worst they turn into something like this.

Not drawing naked 17 year olds might help too, I dunno. And people wonder why the RM community has been getting worse.
TFT

listen chump. i'll break it down for ya, since you seem to be new to the whole "game" scene. i love how dr wily's son shows up on a fucking steam train in the future, haha. maaan, you need to base some kind of imagination on your game bro.

the writing is incredibly awful, even it's simple because it's a megaman game. this is so bad, man.

ps: the timeline is off the charts bro, it's really dumb, welp x is fighting robots that came out in the 50's thats cool.

i feel so bad i think i might have to lend you one of my "many" misaos in order for you to touch the limelight once in your pathetic life. heh.
Ciel

Close
01/31/2009 08:35 PM
Woah, guys! Dont you love robots?? well i for one love robots and am looking forward to this fine piece of electronic gaming software a lot.
Mitsuhide_The_Vagrant

Close
02/01/2009 09:29 AM
No, it just sounds like your game is shit and you need to read what we posted before you get indignant about it.
Mitsuhide_The_Vagrant

Perhaps if you understood "constructive criticism" then the maker would be more inclined to listen to you. Since you just reeled off a bunch of insults it is expected that the developer would be defensive. People are more likely to listen to you if you're not a complete cunt about your opinion.

The same applies to TFT.
Magi

Close
09/11/2009 08:48 AM
To appease the enraged minds of those who find the following story either rather dull or simply horrible written, let me clarify something. Simply put, I didn't put any effort into writing this. Why, because, at this stage of development, I'm not working on the story (like the cutscenes in the game or dialogue) and am completely not thinking about it.
Pages: first 123 next last