Conspiracy of the New Order

Well, We All Start Somewhere

Preamble
Conspiracy of the New Order. What a name! It just screams of an elaborate political yarn involving secret plots, shadowy organizations, and the potential undoing of a society. It invites the player to immerse themselves into an intricately crafted story chock full of the political alliances and rivalries.

As it turns out, Conspiracy of the New Order is actually a comedy game. As if that wasn't enough disappointment, there are no conspiracies, no orders, and not even anything new.

Visual: 1/5
To be honest, this is the first RPG Maker MV game I've played, so I'm not sure what's full-on RTP and what's borrowed from elsewhere.
The one thing I can do is call bad mapping when I see it. CotNO suffers from every conceivable mistake an amateur gamedev can make, be it vast swathes of nigh empty terrain, or tightly-jammed dungeons with absurd maze factor to compensate. Similarly, there's no rhyme or reason to the placement of objects and NPCs, and the whole world is just flat out square.

RPG Maker MV's Face Generator gets put to mostly good use, I suppose. Ava and Holly, two of your party members, share a facial form, making their back-and-forth dialogue look like the same person swapping a wig. Meanwhile, the hero of our story, Leif, bears a striking resemblance to Julian from Romancing SaGa 3.

Not that I have a problem with that. RS3's my favorite SNES game of all time.


Audio: 3/5
You know what I already hate about RPG Maker MV? Not being able to snoop through the Audio folder. One of my biggest pleasures in playing other people's RM games is discovering cool new music.
But anyhoo...
The soundtrack is largely composed of royalty-free stuff and some RTP. A lot of it is good, but none of it is truly memorable. That might be better accredited to the game itself never invoking any emotion besides the occasional chuckle.

There is one buried treasure though. Literally buried >=( Remember the music from that old Prevue Guide? Yeah, you probably don't. Anyway, some of it is used here. It just makes me want to raid the inaccessible Audio folder that much more.

Storyline: 1/5
You know we're off to a good start when the Title screen is a snapshot of the endgame.

As I lamented earlier, this is no geopolitical epic in spite of the ambitious name. It's a comedy. One that never takes itself too seriously, much to it's own credit. But while there's a couple of grin inducing moments now and then, it's not a hilarious romp by any stretch. The art of comedy is all in the delivery, and CotNO's biggest hangup is in relying on the cold, featureless dialogue window and nothing else. No timely sound effects, no goofball BGM, and certainly no visual props.
And then a few of the gags just seem too contrived to be funny. 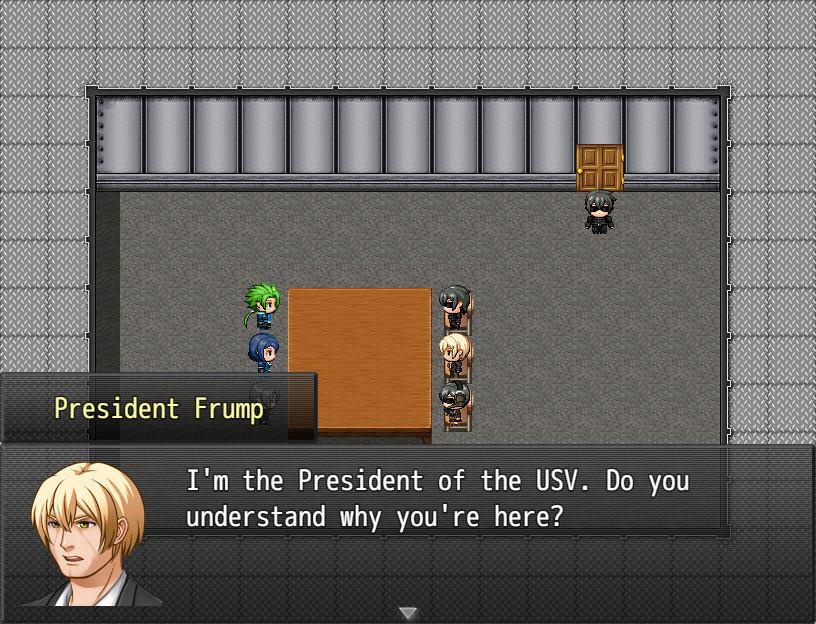 Don't even joke about that.


Gameplay: 1/5
Rounding out the mediocrity is a battle system that's... tenable, at best.
There's no imbalance in or out of the player's favor, and that's all the props I can give it. CotNO's battles are a series of dull and tedious grinds. All you ever do is mash Attack because Magic does the same damage, and then some of the enemies have the audacity to randomly spam Heal when their HP gets low. It's not a skillfully designed Priest + 2 Soldiers battle or some such. It's just the boss dragging the battle out that much longer with gratuitous HP replenishment. Give me a break.

There's not much else to speak of in this category. The game is overly linear with no revisiting or sidequests, later going so far as to literally whisk you off to the next area once you finish business in the current.

Overall: 1.5/5
If you're interested in a short sampling of RPG Maker MV's new side view battle system, this is a good candidate.
Otherwise, there are better options out there.

Close
07/15/2016 09:12 PM
The game may have stale humor, but the picture of President Frump and especially your comment under made me laugh pretty hard.
Balthasar02