Not Without Some Rainclouds

Blue Skies 2 is an RPG made in RMXP. It follows the adventures of a young woman named Lyrelle, who unexpectedly finds herself on a quest to save the world. It’s a sequel, as the 2 implies, but you don’t need to have played the first game to understand it. It’s pretty stock material as far as RPGs go, but it has some cool stuff going for it. Let’s break it down...

Blue Skies 2 is one of those RPGs that subscribes to the notion of more visuals = better. To a certain extent, that's true. This game is STUFFED with eye candy, and sometimes, it gets a little overwhelming. 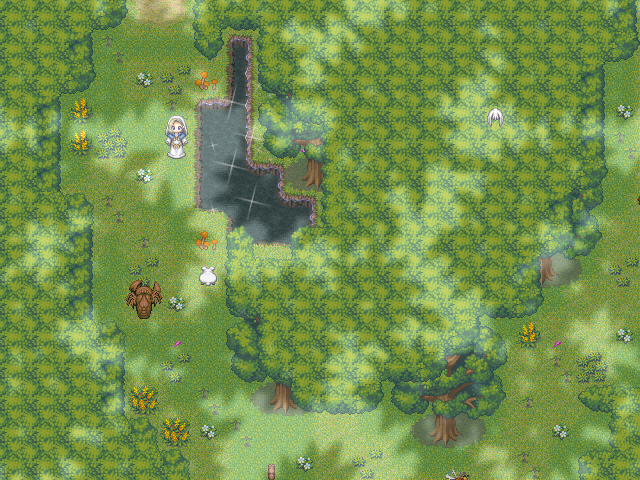 More on that last bit later. Visually, the game does its best to stun you, and for the most part, it will. Apart from the look of the maps, there’s some pretty sweet character art for each of the party members. In-battle graphics feel a little out of place, but I’m willing to overlook it since everything in battle is animated. 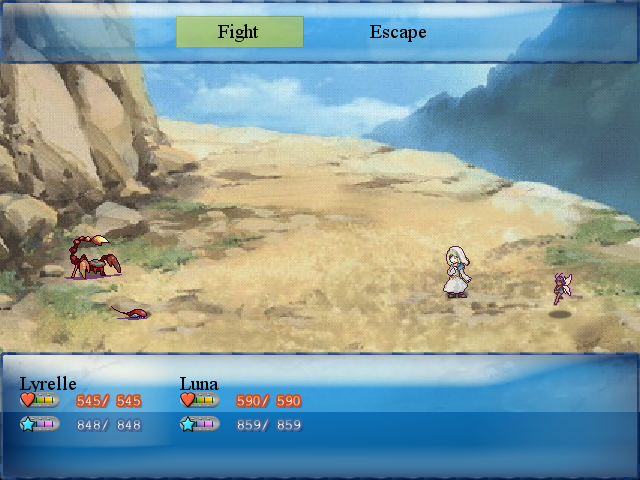 I mean, I guess I could’ve made this a gif, but trust me, they’re animated.

If I have one visual gripe with this game, it’s that some of these battle backdrops aren’t quite suited for it. You see, some combat skills can knock the battlers around the field, and on some backdrops, this can result in battlers standing where they shouldn’t be (or completely off-screen). There’s also some question of scale, as the battlers are all pretty small, and some locations look too huge by comparison.

I greatly enjoyed this game’s music. I’m not sure if any of it is custom-made, but every track was appropriate for where it was used, and nothing felt particularly out of place. The battle and boss themes were especially good, which is always a plus since you hear them so often. The only problem I had with the music is that some of the songs don’t loop properly. Most of the time, you’re not on a map long enough for it to be an issue, but it’s noticeable when it happens. As for sound effects, a lot of them are RTP, but they’re used fittingly and don’t detract from anything.

Of special note is that all the party members have their own voice acting in battle. Considering there are ten of them in all, that’s pretty impressive. They have different things they shout for various actions, and often have multiple lines for the same thing. Typically, this sort of stuff gets old fast, but there’s just enough variety between party members and their voice clips that it doesn’t get too repetitive. However, it isn’t all super-great; there are a couple things that bothered me about this feature. First, recording volume is all over the place. Some clips are much louder than others, and it can be very jarring to hear them. Also...a lot of the lines are overly dramatic and hammy, which just come across as silly in most circumstances (like in the picture I drew above). Perhaps it might’ve been cool if the melodrama lines were saved for more eventful fights, but alas. I’ll wrap up this section by saying that the nicest thing about it is that it gives you a sense of each character’s voice, so you can better imagine how they sound when speaking.

I wanted to like this game’s story more; I really did, but it has some serious things holding it back. The biggest problem for me is the staggering number of typos in it. Some parts of the game are better than others in this regard, but there are times when almost every text box has some spelling or grammar error, and they can crush immersion like nothing else. 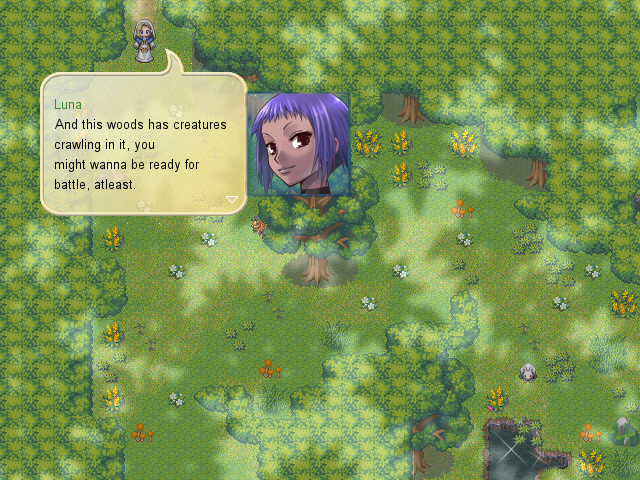 “And THESE woods HAVE creatures crawling in THEM.” And ‘at least’ is two words, Luna.

They’re rampant, and I was unable to take most of the dialogue seriously. But even if they were all corrected, I’m not sure it would’ve helped me much. Our protagonist, Lyrelle, is a sweet young lady, but the way she’s written is incredibly bland.

Minor early-game spoilers: Lyrelle is separated from her parents at the tender age of 6 and raised in the forest by her fairy friend, Luna. The game starts 14 years after this incident, making Lyrelle the not-so-tender age of 20. But she still kinda talks like she’s 6. She refers to her parents as Mommy and Daddy, she’s shown to be very immature and naive, and her general reaction to conflict is to get really sad and scared. I could understand this if she was 12, or maybe 15, but 20? Seriously? Thankfully, this becomes less and less of a thing as her journey continues, but she’s not a very compelling character. If ultra-benevolent protagonists are your thing, she won’t let you down. 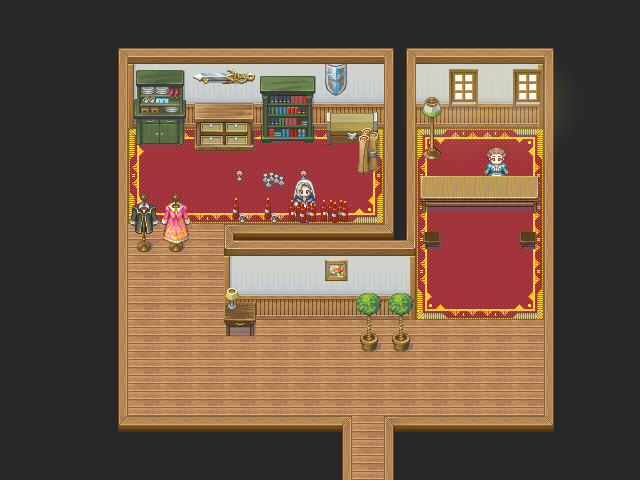 Lyrelle, you’re not even old enough to drink.

The story itself is also a bit weak at moments. There are times where things are merely described to the player instead of being shown, whereas they would’ve had more impact if they were seen instead of explained away. In particular, I recall a time when the party is split up by a teleportation mishap, and not only is the one group's fate dismissed through dialogue, but the reason they couldn’t meet back up later is as well.

Looking past these things, the story is okay on its own. It’s not the most riveting tale, but the sequence of events makes enough sense to be believable. It raises some questions of morality in regard to oppression, so that’s something.

It’s an RPG! You explore maps, open treasure chests, delve in dungeons, and fight monsters. I’m sorry to say there are some exploration issues in this game as well.

One thing this game really needs is a once-over on tile passability. There were many times throughout the game where I found myself standing in places I shouldn’t have been able to, and also many where I couldn’t pass through something that didn’t seem like an obstacle. 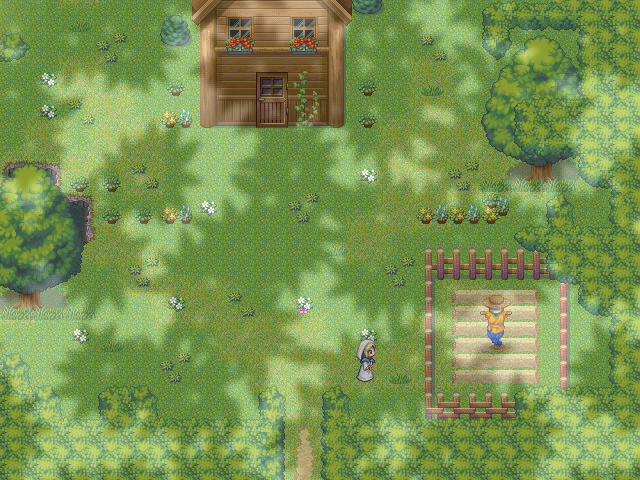 Do you see that patch of grass in front of Lyrelle? Apparently, it’s impenetrable Crab Grass, because you can’t walk on it. There’s plenty of it to be found in this forest she calls home. Here’s the same picture with black squares over all the ground items you can’t walk through. 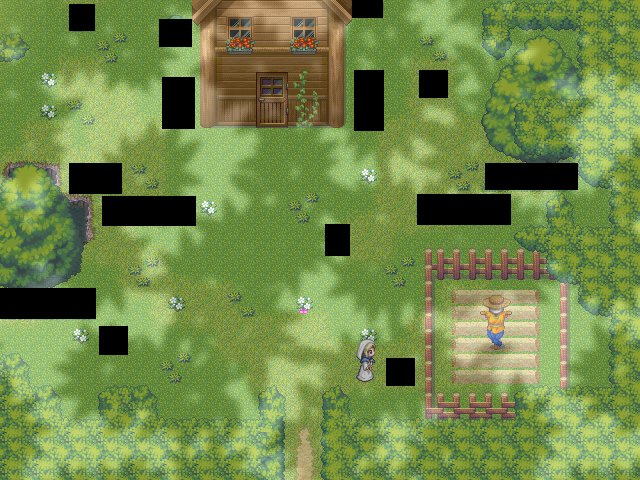 That’s a lot of annoying stuff you can bump into, and this map is one of the better ones. I can’t think of a single location that didn’t feel suffocating for this exact reason. The sheer amount of extras put on-screen hurt exploration quite a lot. In dungeon areas, this makes navigating around enemies difficult. In towns, it makes walking around inconvenient at best. I can kind of forgive it in dungeons, since enemies dash about at random and the layout makes it more likely you’ll hit an encounter. Even so, decorations are nice, but not when they hurt the flow of the map.

Combat is turn-based, and for the most part, the game’s most solid attribute. I’m glad to say I didn’t have to do any involuntary grinding to beat this game. I didn’t even clear every map of all its encounters, so that’s reassuring. As before, your full party is ten characters, but you can only use four in battle at a time. I raised my whole group evenly and they were all just over level 40 by the game’s end. You can swap party members from the pause menu; a feature I greatly appreciated.

The game is balanced decently well. Some of the game’s later skills are relatively overpowered, but the enemies can dish it hard enough that you need to stop them quickly before you get torn apart. The game has a sort of unique spin on traditional elements. Basically, all of them are divided into pairs that beat each other. For example, Light beats Dark, but Dark also beats Light. It’s easy enough to remember and intuitive for the most part, but some pairs are more questionable than others. The example that upset me is that Fire beats Ice and vice versa (which is fine), but Water is part of a different pair (Lightning) and does no extra damage to Fire. As a devoted Pokémon fan, I say NAY! There’s also the issue that only one of the characters actually has a big variety of these spells to work with, so if they aren’t in your party, you’ll have trouble hitting elemental weaknesses.

The game’s element system also extends to weapon types, which is something I liked better. There are three classes of damage weapons that follow general rules for their application against monsters. Bringing one party member of each class and one magic user is a good way to go, and offers you the most options against a variety of enemies. Alternatively, if you know what you’re getting into, you can bring characters whose strengths overlap and just utterly destroy a specific enemy. Sometimes, it’s hard to tell what your opponents’ alignments may be, but one of the characters has a Scan ability that tells you literally everything about every monster on the field (for 2 MP!), so it’s not hard to find out what works. It’s an effective system.

Dungeons are not very elaborate in this game. Most of them consist of natural mazes with wandering monsters. Screens are not that big and each area only has four or five of them. Only a handful of them contain puzzles, and they’re not particularly complicated, so combat and bosses are the main sell here. In terms of questing, things are rather straightforward at first. After the story gets rolling and its pace is set, there’s plenty of optional content to be had. Most towns have a request counter where you can do a handful of missions for rewards and experience. It’s also worthwhile to visit old areas from time to time, as new quests and NPCs crop up occasionally. Speaking of old areas, if you’ve already passed through a location, the world map offers to let you bypass it the next time you need to go through. THANK YOU.

Let’s Wrap This Up!

Anything else that comes to mind is just miscellaneous stuff. Some NPCs are solid when it feels like they should be pass-through, such as tiny squirrels in the forest that block your way. There are also NPCs that wander around towns at a constant rate, making them hard to talk to. Town design is kind of uninspired; a lot of houses look like locked broom closets.

But all in all, this is a decent game. It could really have used one more layer of polish to fix the typos and tile errors, but I think it has it where it counts. I want to give it a better score than this, but I just can’t overlook its smattering of flaws. I give it a... Every battle is life and death.

Btw, I understand your concerns with many of the game's flaws, which I myself wish I could've done better during its development. It is greatly appreciated, and they're very helpful for my future game developing journey! :)

Also, during the early writing of this game, my English was indeed worst than what I have right now. xD So yeah, that explains why you saw some of those typos and grammatical errors. :)

Thanks so much once again, halibabica! I really appreciate it so!! ^_^ :)
halibabica

Close
07/16/2018 10:23 PM
Great review Hali, this really sums up a lot of my own thoughts of the game. I ended up accepting a lot of the flaws, and underneath it all is a really honest RPG Maker game - amateur in a charming way.
Starmage