No longer the Earth

0 reviews
“It is truly strange to no longer inhabit the earth”
- First Duino elegy,
R.M. Rilke


The project takes this quote from Rilke to speak about how extraneous, odd, even weird can be the outer space. The feeling of not being home anymore, treading unknown ground.


The situation
ARIADNA, a space station that orbits the Arhat Moon. Eight crewmembers of the company Virgin-Nagata established within its walls, waiting for its subsequent opening to the outside. But now that ARIADNA has sent a distress call, there‘s no doubt that something has gone wrong.

The characters
Jake and Henry, two workers of the company, were at that time performing maintenance on the facilities in Arhat. They have been sent to ARIADNA in order to investigate.

The environment
A big, dark, and (apparently) empty orbital station. Jake and Henry soon are going to realise that something went wrong with the station power. But that’s not the worth… 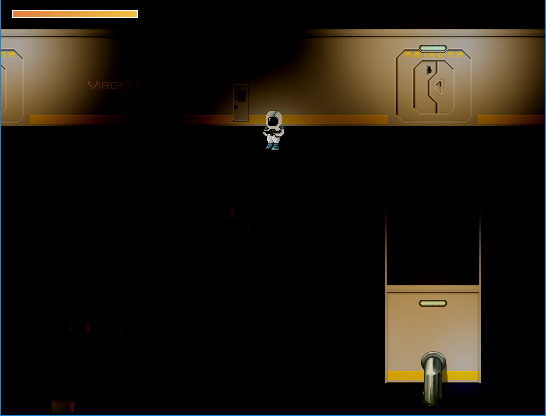 Explore!
Find your way in Ariadna without a map, and even without light.

Investigate!
There has been no response from the crewmembers in the first radio contact. The Company demands you to find what the heck happened.

Think!
Use your brain to solve this terrific puzzle of silence, darkness, and flesh. When that’s not enough, rely on you character.

Communicate!
Your companion stays in the spaceship. Ask for help or support anytime. But he is not the only individual you will be able to communicate with. Find the survivors, make them understand you are an ally. Save them. 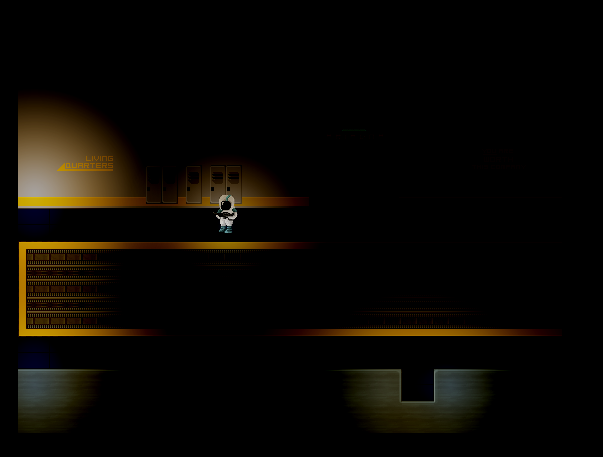 Survive!
Be careful what stays in the dark. Do not waste your bullets. Try to avoid enclosed spaces, since it is faster than you. And watch your back!

And finally, put and end to this dangerous space oddity!
Learn about this thing. Find a way to hunt it. Then ask the Company for a reward.

NO. IT’S NOT GONNA BE EASY.

You won’t be able to save when you want. Each step can lead you to salvation, or to own death. You have to make decisions you do not like, perhaps endure sacrifices to test your sanity. But you must do it. You cannot allow the thing that inhabits ARIADNA gets to escape to the outside world….to mankind.

First demo is in development soon, but quite advanced. Thank you all for your support, feedback, and patience.

- Finally decided which is gonna be the game title. Was made with the help of Keedrea (thanks!). She is a game developer and talented pixel artist.
Also changed to a more custom menu.

- Realised the game was too much explanatory in the beginning (something I hate as a player), so I changed a bit the start. Added a prologue from a different point of view. It’s an “In media res” and it shows some events of the middle game, when situation is gotten more desperate. This, hopefully, will create expectation to the player, while warning him there’s hard times to come.

Jake, main character, awakes in a dark hole with his helmet broken. How he got in there? Well, you’ll need to play to see.

Worried for his buddy, Henry tooks the playable character role. While exploring the station with him, the player will encounter a mysterious passenger. This will be the first boss of the game. Fixing the mechanics was not easy but I am very happy with the result.

- This new start forced me to create new scenarios, like for example, the spaceship you use to arrive to the station. It will work as a sanctuary where you can save and recover Mental Points. I wanted quite responsive and unique so worked with Parallax Mapping for this one.

- Displayed health bars for the player and the enemies.

- A lot of hours spent in character sprites. Created Henry and a lot of new poses (using pistol, unarmed, laying in the floor, crouching, sitting down, using radio, taking helmet off).

- Wrote the current dialogues as a script, in order to got its english grammar reviewed.

Markus (AudioCabin) developed the music and he is currently working on the Title Song. Excited with this results and expecting to share finally the demo with you.

author=VicWhite
Thanks a lot mr Infection! Appreciate the encouragement!!

Keep it up! :) Everything looks great and very promising
robb0226

Close
03/15/2017 01:00 PM
This game looks very interesting. I'm not a big fan of space-related games or movies yet I find the plot very intriguing! Keep going and good luck!
VicWhite

author=Make_it_MagiK
This game looks very interesting. I'm not a big fan of space-related games or movies yet I find the plot very intriguing! Keep going and good luck!

Thanks a lot for dropping some encouragement! :D
purplehills
248

Hello! I try to be everywhere, altho it takes some time to maintain all profiles updated.

Thanks for dropping a comment, this is finally becoming something similar to a real game <3 How is Zytlena Chronicles going?
InfectionFiles

Thanks for the feedback! I am happy this can be seen as an interesting feature ^_^
Pages: 1