~Prenote~ (Feel free to skip this)
This is my absolutely ~lovely~ love bounty on the Kryberia game demo. The demo involves ghosts, soldiers, British people, some very beautiful graphics (which you get bonus love points for since I'm a whore for graphics) and one very atmosphere shattering moment. With all of those wonderful and bad inclusions in mind, we may as well add another note; there will be spoilers in this review. Since this demo is a decent size and has obviously had a good deal of effort poured into it I highly recommend playing the demo before reading this. Go ahead. I'll wait.
...
Done? All right! Then, let's glue this to a tree and attach macaroni to it! Macaroni is a loving food for those who weren't aware.

~Gameplay~
Battles: The battles displayed in this demo were very simple and straight to the point. With only the options to defend, attack, show off an ability or use an item, you fend off various enemies such as birds, wolves, creepy spiders, and g-g-ghosts! You spend energy for abilities and you have health. A neat addition is the green little heart that tells you the condition of the characters. Though, it is a little useless in the boss fight and in general. As much as I enjoy looking at it, it doesn't really do anything helpful. I also appreciate being able to run away from the menacing ghosties easily. Which conveniently brings me to an excellent design I noticed was implemented. If you want to be able to have energy out the wazoo to just waste on whatever, you can do that - at the risk of getting killed and wasting a stimpack or two. And due to limited resources, you're going to want all the stimpaks you can get. The decision the player has to make here is elegantly implemented and adds a layer of depth to how you play the game. I only have one problem with it... The ghosts don't drop energy every time and it's so cruel to make a player sacrifice resources for nothing. I'd suggest making the drop rate of the energy 100%. I'd like to comment as well on how well balanced the game is. The enemies aren't strong enough to kill you if you're smart, but not dumb enough to let you off with button mashing without punishing you. I would've liked more enemy variety though - the birds were a little ridiculous and I don't think you added enough variety fast enough. I'd suggest AT LEAST having different formations of the enemies! As for the boss battle at the end, I really like how you hinted at what abilities you were supposed to have. It's even possible with no items if you go through it once or twice. I don't like, however, that you were basically screwed if you didn't have the abilities. It would've been nice to have attack do at least minimal damage so that it was at the very least possible if you had ran through the demo's battles with the escape command.

After all that, the demo shows a very solid battle system, or at least the foundations of a very nice one.
4/5

Puzzles: The puzzles in Kryberia are decent, most of them involve finding a number so you might not call them a puzzle. Others are turning on terminals until the power comes on. for that particular puzzle I mainly just kept activating things until everything was on. My complaint is that I couldn't really see any correlation between what was coming on and going off, like, no real rules just "keep turning things on until you win!" as you can't actually turn anything off. I'd suggest making the "rules" of the puzzle a little more apparent. Another thing that could have been more apparent is what the switch by the door before the North Cave did, as I had originally thought it opened the large doors and wasted a bunch of time and resources which only made the light backtracking I had to do later more infuriating than it actually was. General rule of thumb is to not waste players' time!

Nothing revolutionary or extremely clever, but I did enjoy what puzzles were there and I felt properly rewarded for solving them. Overall, I give you 3 and a half slow claps of love out of five~!
3.5/5 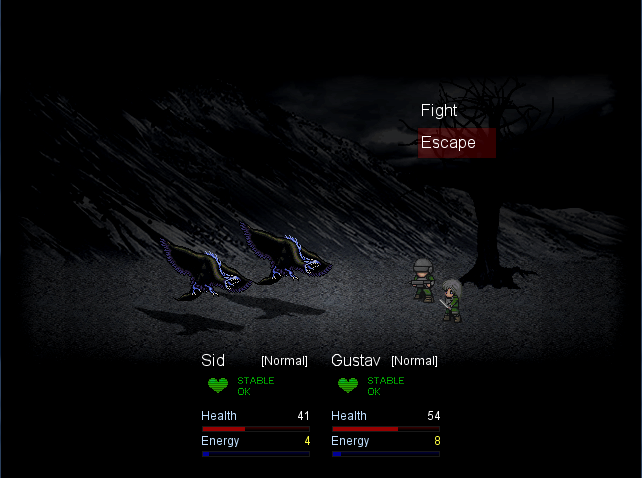 The birds, the biiiiiirds! Fortunately, these ones are more annoying than dangerous or scary!

~Graphics/Mapping~
The graphics in this game are just fantastic! There are one or two things that I believe I recognized, but overall the entire game was so pretty~! The main things that really clashed were the monsters (see dem birds above and compare them to the people). I would probably fix that, which I'm sure the creator will when everything is said and done. I wasn't really fond of the straight paths everywhere, though it makes sense for the outer cliffs, the cave really could have been more open (by the way, the North Cave is a little more open which I liked). I could also tell what everything was, so that's a plus. The fog was nice touch as well, though I don't really understand why I couldn't walk int the thick fog, which I'm assuming was a glitch. Another weird little thing is that I could walk through the really thing fences, the rocket module thing, and I could walk on the logs too. Also, the way the maps were connected made sense and gave a very good idea of where I had to go save for when I got confused by puzzles. Now... there is one point in which my sense of immersion just broke and I laughed like crazy for the rest of the demo (I'm glad there wasn't much more after this or I would've had a really bad experience with this...). When the elevator is under attack Gustav manages to get a picture of the Shrieker attacking them. And when it shows up, well, you see the Summoned Skull. Yup. From Yu-Gi-Oh. I desperately hope this is just a placeholder, it just destroyed all of my feels and I really REALLY didn't like it. On another note, after the Shrieker battle, Kent(ona) looks like Gustav and instead of switching back to Sid afterwards, Gustav is the leader of the party.

Save for that, ugh, occurrence, this game looks very nice and I enjoyed exploring a ton. Another thing I would change though is to make more things able to be examined since what you see is what you get most of the time and really would've helped make this category at LEAST a 4.5.
4/5 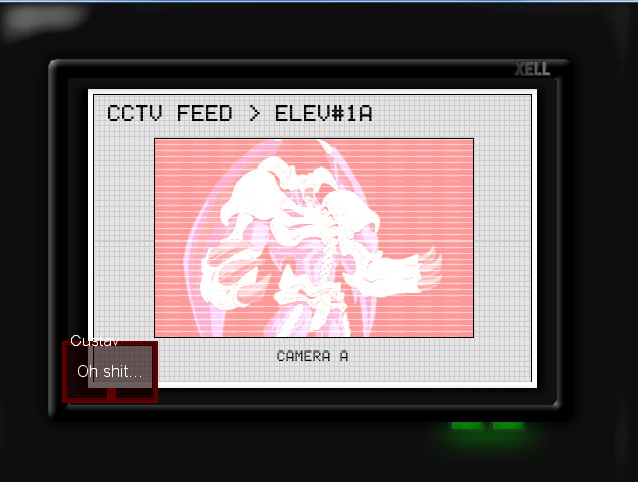 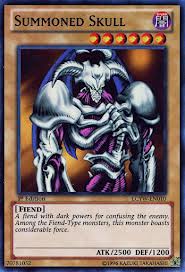 ~Music/Sounds~
The music and sounds were pretty could at setting the scene and allowing me to hear what's happening. They never really detracted from the game, and they weren't a main focus by any means. The only thing I didn't really like was that I was able to recognize a few XP RTP sounds, though it's no big deal I would change them. I really enjoyed the music playing when shit's going down because you can really tell when bad things are happening, there's no question. It really makes you want to kick your characters into gear. Luckily, it also tells you action is taking place so you don't have to normally! The only other thing I would've changed is I would've made different music play for the backtracking after reaching your original destination since there was a bit of a mood change and it would've been nice to have music to help entertain the player.

Obviously I have no strong opinion, but I did enjoy the sounds the game was making.
3.5/5 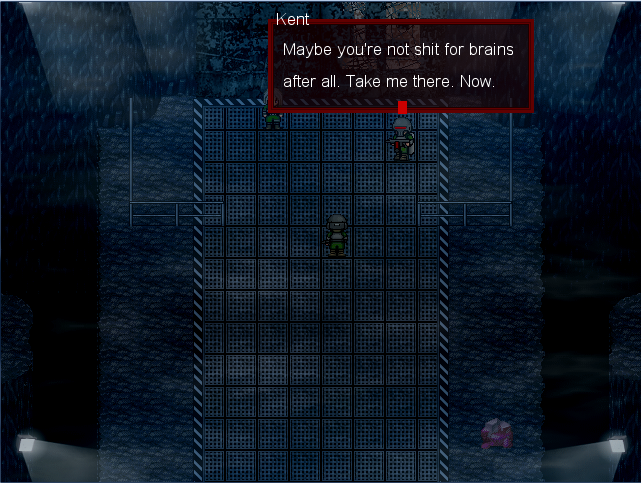 When did kentona stop being a pleasant Canadian, eh? I always knew he had a darker side~<3

~Writing\Story~
If you have ignored my spoiler warning of love thus far, now would be the time to turn back! No? Alrighty then~
Show
You play as the under informed soldier Sid who isn't too fond of jerks abusing their power, which I relate to. You're dropped off on a monster infested cliff to get the chip that presumably fell off the side of a cliff. I'm not sure how the explosive looking thing kept it from breaking, but I'm not going to hurt myself thinking about it. After going just a little ways you're introduced to Gustav who is a British demolitions expert. Lovely~<3 I like having him introduced here rather than just starting with him, it really helped characterize him I think. Regardless, you press on into the caves and solve some puzzles, find some ghosties and find a bloody note. On it are a mad man's thoughts and his warning about imminent danger. I'm not really sure why the characters didn't talk about it too much, maybe they're blind? (Probably not.) You continue exploring the caves, unlock a door then flip a switch to your goal. For some reason, Kent(ona) makes you backtrack all the way to him instead of meeting you halfway, but okay. You meet kentona in front of the cave entrance then after realizing you can't go through the big door you go through small doors in the cave. Just want to say I liked seeing the humanization of the characters from them making a mistake like not foreseeing that they wouldn't be able to get through the giant doors. Anyway, after some more monster slaying and terminal activating you learn from Kent that you're here to dispose of something: probably the Summoned Skull Shrieker that attacks you afterward in the elevator. I liked having my party limited by sid getting hurt here, since I feel it would have been way too easy and it showed that the Shriekers are really dangerous! 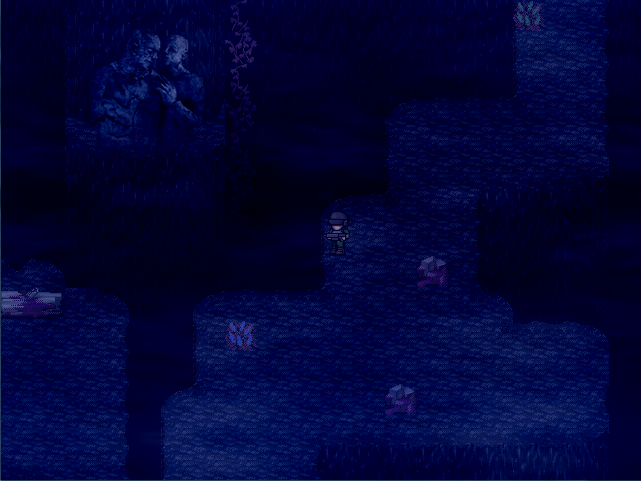 ~Prelude~
In conclusion, that was my absolutely spectacularly better than Caz's love bounty! I hope you get some use out of this, it's a little silly, but I hope that just makes it easier to ingest what needs to be fixed and what is just swell~<3
I'll hold off on an official score for this, but if I was scoring it, you'd probably get a solid
4/5