Hello! Welcome to another demo review: this time the game is "Tangerine, cures all status effect" a short Rpgmaker XP game by daiconv (author of FIG, that I reviewed here) that is supposed to be one hour long in it's complete form, but what we have here is a 13-15 minutes demo, a dungeon and a bossfight.

Chieki and Southpaw are two adventurers, one mage (well she uses an air spell that somehow never seems to hit!) and a fighter are going to fight and kill the Goblin King. Again! Yes, because the ugly creature was apparently resurrected after being killed once. People fear him, so here we are, ready to take out the evil monster once for all!

The game is basically a dungeon delving adventure divided into four locations: there is an outside area where you can save and buy potions, then the dungeon is divided into three different floors, the first is very little and requires to open a locked door, and the others are bigger even if pretty simple and linear. 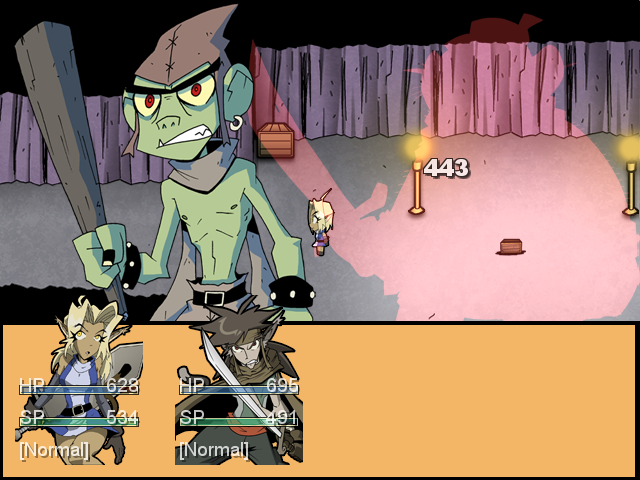 One goblin down! But it's just the first battle of a long series

The game uses random encounters, and there are about three different enemy types (two goblins and a rat mage) plus a final boss that is rather tough. Even if enemies can be defeated with just a couple of hits, the only way to heal is using potions, and considering that the only shop and save point is outside the dungeon, well it's not going to be so easy winning the final boss that is waiting at the bottom of the dungeon. Luckily some defeated enemies will provide some potions and there are chests here and there, but loots is scarce, also there is no way to upgrade weapons or characters, that have just one ability each, and not very useful too.

The gameplay is ok, anyway the real best aspect of the game is the graphic style: all is custom made, from the backgrunds, the enemies, the characters and also the dialogue boxes, it's no surprise that this was going to be a comic and then it was transformed into a game. It's really a beautiful game, even if the dungeon has no particular interactions there are many little details and the characters' portraits have also different expressions. But this is not all, characters are also cute and likeable, dialogues are well written and the music is appropriate and used well in every part. Oh and the characters are also voiced! I love how they shout before attacking, even calling the special technique names when they're going to use them! That's cool.

There are just a couple of issues I want to mention: first is that Chieki not only walks quite slowly, but also seems that the collisions takes place pretty far from the objects and walls themselves. Weird. Another problem is the already mentioned presence of just one save point and shop placed before the dungeon itself, making it pretty much useless. Well ok, you can use all your money to buy potions, still it's unlikely that after a player leaves the first floor he'll go back to restock. Nah. Not at all! 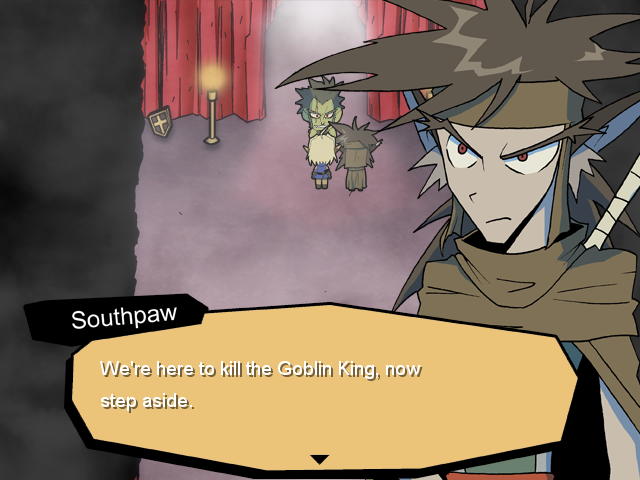 The fine art of diplomacy!

Final Verdict
A simple and rather difficult mini-dungeon adventure with awesome art, ok it's nothing new (combat is the basic Rpgmaker XP system and also the use of random encounters is something cold classic style!) and it is also incomplete, anyway it immediately stood out as soon as I saw some screenshots. With some little refinement (like a merchat and savepoint in the middle of the dungeon, some extra dialogues/events/party banter ...) and some kind of ending slide or cutscene this would be a rather nice little scenario.