Hello!
Welcome to a new review, this time the game is Faith in Feathers, a game about angels that will fight and kill every opponent, from ghosts to soldiers, from sorcerers to goblins. It's a big series of small dungeons and big fights!

Did I say Archangels? Plural? Yes I did!
Micheal is the typical warrior: strong attacks and some special attacks, nothing fancy, but he's soon joined by some companions. The first is Metatron, looks like a sort of mage, and has some powerful offensive abilities, then Sandalphone, the chanter that heals allies and confuses enemies, and the bow wielding Raziel.
Even if powerful, our characters will earn some levels during the various levels or dimensions, learning new moves (and you need some levels to get the first area attack!) 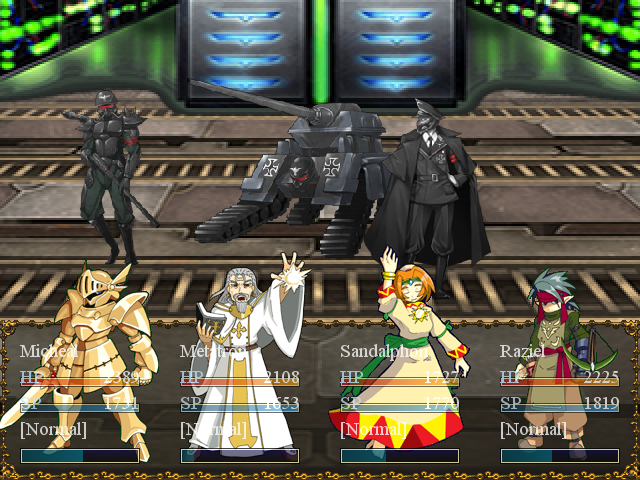 Angels VS Nazis!!! Aren't you excited?

There's a lot of combat in this game, and the neat thing is that every dimension has its theme: be ready to fight necromancers in medieval lands, ghosts in graveyards, and soldiers in underground facilities! Lots of enemies that sometimes posses various skills (like those ghosts who "resurrects") and really powerful attacks! Sometimes even too powerful, but if you want to play safe you can replay old zones to get more experience and m̶o̶n̶e̶y̶... essence that you can spend to get more consumables. But game is clearly funnier if there's a certain difficulty so I think that grinding should be avoided, even if it's so tempting!

Levels are all short dungeons with random (oh no!) encounters, except for boss fights, luckily you can save anywhere and anytime. In some of these small settings there are also some simple puzzles and enigmas that must be solved to progress or open a closed door, it's nothing complex and it's a nice addition to this simple game.

The bad? Well nothing much, I do not remember typos or errors. This is a nice little game with a self contained story and a simple concept (buy supplies at the main hub then leave, explore and fight small levels. Repeat!). It's well done, the only thing I did not like was the excessive use of visual effects that makes sometimes combat (that is already quite challenging) chaotic and can be distracting, but there aren't many other problems with this game: clearly the story is simple and can be a bit repetitive despite the variety of setting and enemies. The truth is that there isn't a lot to do in this game, but it entertains for a couple of hours! 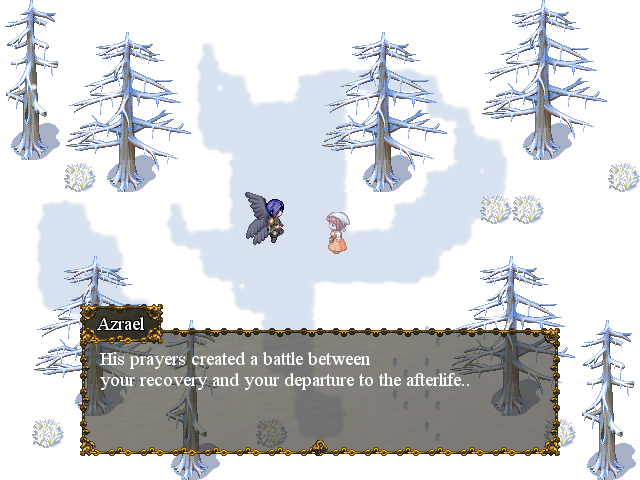 Basically this is the plot of the game!

Verdict
In few words, this is a simple game about fighting archangels. The story is linear and simple, but well written, characters are likeable and there are some interesting parts, like for example the final duel between the two archangels (so no more party management, and, if you read carefully, you will know that is Haniel the one that will fight the Azrael, not one of the party members, and this is an unusual but interesting choice!).

There is not much else to say about this game, and you may or may not like it for various reasons but there is no doubt that it was done with care and attention to the details, and it includes many different (simple but well done) maps that are quite simple but coherent with the varied and challenging enemy encounters.

My idea is that this game is GOOD! 4/5 is really deserved for a little gem like this!

Close
08/01/2020 02:38 PM
Hello TheRPGMakerAddict! and thank you so much for this lovely and detailed review! <3 ^_^ :) I am so happy to hear about your kind words and that you enjoyed it! :D To be honest, I've been quite stressed lately dealing with some of the steam release stuff for my first commercial game. But seeing this review for an old game of mine has helped lifted them a bit! ^_^ Thank you so much again! I'm so happy you enjoyed Faith in Feathers! :D <3
TheRpgmakerAddict

author=Starmage
Hello TheRPGMakerAddict! and thank you so much for this lovely and detailed review! <3 ^_^ :) I am so happy to hear about your kind words and that you enjoyed it! :D To be honest, I've been quite stressed lately dealing with some of the steam release stuff for my first commercial game. But seeing this review for an old game of mine has helped lifted them a bit! ^_^ Thank you so much again! I'm so happy you enjoyed Faith in Feathers! :D <3

Yay, yes! I heard good opinions about this game so I decided to try it and I wasn't disappointed! I imagine it needed a lot of work due to the many mini-setting, and the presence of some little puzzle also surprised me! :) nice one!
Starmage