The Sequel to My Favorite RPG Maker Game

Before I get started, I’d like to point out that English isn’t my native language. Therefore, I’d like to apologize in advance for my English.

As I mentioned in my last review (also hinted at in the title), Feral Dreams is truly my personal favorite RPG Maker game. When I first found out that a sequel was in the works, I was astonished. I knew from the beginning that the sequel was probably not going to bring me the same kind of “magic” as the original did. However, since Feral Dreams 2 came out a couple of years later (a couple of games later, if you were a follower of Kelarly back then), I did expect this to pretty damn good, knowing how much the developer had evolved since the original. Let’s see how things went, shall we?

(Worth mentioning: I will do a lot of comparisons with the original in this review.) 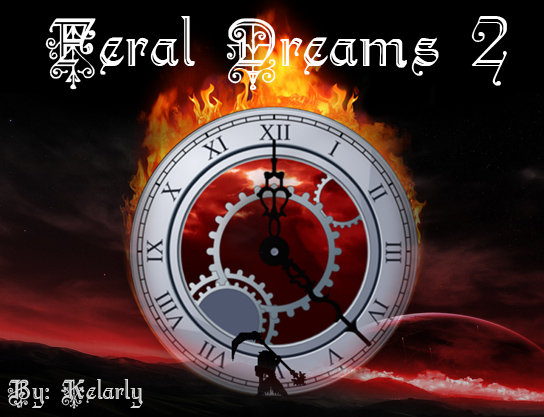 Story, Characters & Dialogue:
The story of Feral Dreams 2 follows and builds upon the events of the original, so I highly recommend you to play the first game before giving this one a shot. There’s a brief summary of the first game’s plot in the intro, so if you feel like you’ve forgotten a few things, don’t worry about it too much.

I really like how the story in this game ties in with the original. For example, the first game hints at a sequel by showing off an older Raiko, being alive and back in Celestai after being dragged into the Inferno. Sure, this kind of gives away the fact that Raiko will eventually get out, but that’s not really what it’s all about; it’s more about the consequences in this game. Sure, Raiko and Willis escaping the Inferno may sound like a good thing, but what if I tell you that they’re not the only deities who managed to escape? What if I told you that not all of them share the same intentions of escaping? Not all deities have loved ones back in Celestai that they long to see again.

10 years have passed since the end of the original. Things have changed quite drastically both inside and outside of the Inferno. New towns have been established, old areas have either evolved or been abandoned. The world of Celestai has changed quite drastically over the years, and so has the people. The view on the Praxis deities has been changed (for the better?) thanks to a dedicated group known as the Followers (of Praxis). People feel sorry for the deities and they want to forgive, but does the same apply for the deities themselves?

In terms of tone, I think the sequel does a good job at remaining dark and serious. This is generally a good thing, since the world of Celestai is still a pretty grim place.

The characters feel a lot more fleshed out in this one, especially the villains, since they have their own personal reasons for doing what they do, instead of being evil just because. Their reasons are a lot more believable and relatable this time, especially to our protagonists who share some similar struggles. The difference between the two is that they choose to deal with their problems with different manners.

Overall, the writing has definitely improved a lot since the original. Grammatical errors have decreased and the use of ellipses is gone almost entirely, which solves the past problem with inconsistency that the first game suffered from.

Another thing that has been greatly improved upon is the NPCs. Most of them have some interesting things to say this time around and a lot of it contributes to the world building. I believe that I spoke to most, if not all of the NPCs in the game. Compared to how I ignored most of them in the original, I personally think that this is a huge improvement! 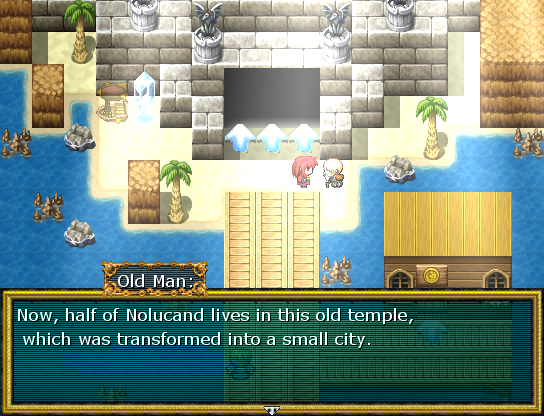 Gameplay:
I will divide this section into two sub-categories: Battles and Exploration.

Battles:
The battles and the game’s overall balance are very similar to the original game. There are some difficulty spikes here and there, though, but all in all, I think that the game has a decent and consistent difficulty curve.

Overdrives still exist and are still enjoyable and rewarding to use. The ability to steal has been removed, which may be a bit of a bummer to some, but personally, I’d rather be without it if the bugs from the original stayed persistent.

I must admit that I do miss possessing the ability to reflect physical and magical attacks, but after the battle I’m about to show, I have to say that I’m a bit glad that the abilities weren’t used too often. 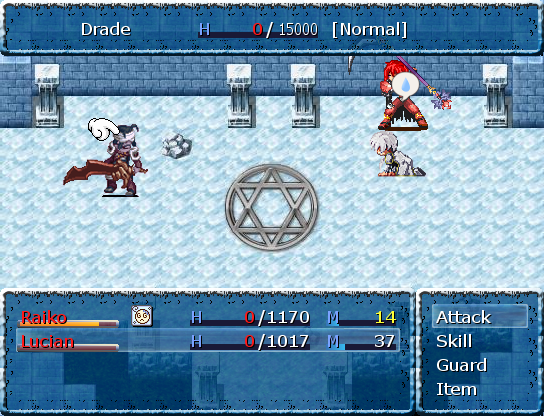 A battle to the death…and beyond! I believe that this bug is in fact caused by the ability I mentioned above.

I also miss having regular skills that hit all enemies. Sure, this was not a big problem when it came to the bosses, but for regular encounters? It made some battles feel unnecessary long in my opinion. Speaking of unnecessary long battles, there were a few bosses that just felt like a drag to fight, mainly because of their huge amount of HP. The fight against the girl in the temple (forgot her name) felt way too long.

Longer fights against certain key characters can sometimes add some grand and dramatic feel to the battles (it can also enhance the mood), but for a random character that I didn’t care about one bit? I can’t say that the unnecessary amount of HP added anything to the battle. The battle was neither challenging, nor interesting; it was just very long and boring.

I like how this game, like the original, offers quite a number of optional bosses. I did not try to beat most of them, though, since they all basically rely on having the player grind for countless of hours in order to reach the “recommended level”. Since I can’t admit that I’m personally motivated to grind for about 100-200 hours (which is 10-20 times longer than the main game), I feel that this is a missed opportunity.

However, this game does indeed have some fun and interesting boss fights. I especially liked how some bosses had their own little tricks and strategies to them, like the Evil Eye in Sami Swamp for instance.

Exploration:
I have some mixed feelings about this area, but for the most part, I’m a bit disappointed here. The mini map from the original is no longer a feature, which felt particularly impractical when I was exploring the huge maps, looking for treasure chests. It discouraged me to explore.

The Gold Coins and other similar items are nonexistent in this game for reasons unknown. I really miss the reward of finding a Gold Block and selling it for some hefty cash. 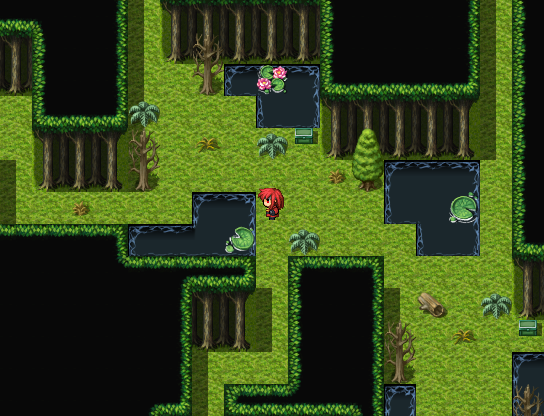 My main gripe with this game is the same as the original: the random encounters are just too frequent for my taste. This discouraged exploration even further for me, which is a shame, since it’s probably one of my favorite things to do in video games. As a result, I fled from most encounters and possibly missed out on quite a few things for not exploring the maps fully.

Graphics & Mapping:
Graphically, the sequel isn’t that different from the original. Most graphics are still RTP, bar a couple of MACK tiles and some other things. The mapping feels a bit better however; the areas feel more detailed without being too overcrowded. The use of tints and fog effects is a nice addition as well, which brings a lot more life and atmosphere to the environments. 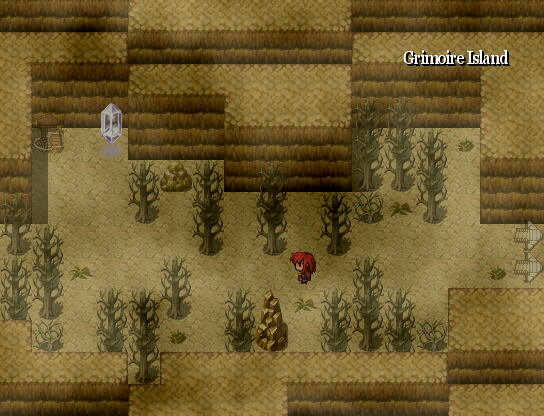 Yet again, all battlers are fully animated and they still look just as gorgeous as they did in the first game. However, some battlers still contain minor animation errors, and for some reason, the animation for “Leg Sweep” seems to be missing.

I did like the different logos used for the chapter and area introductions, even though some of them looked a bit cheesy. If the use of fonts was more consistent, though, I believe that the game would’ve looked even better as a whole!

Music:
Like the original, the music in this one is not original, but well-chosen and helps by enhancing the general atmosphere and mood of the game.

Overall:
Compared to the original, Feral Dreams 2 is definitely an improvement, even if I miss a few things (like the mini map). It generally feels more professional and polished, though. It took me about 9 hours to beat it, which is a pretty good length for what it is in my opinion. If you’ve played and enjoyed the original, there’s really no reason for you to not give the sequel a shot. 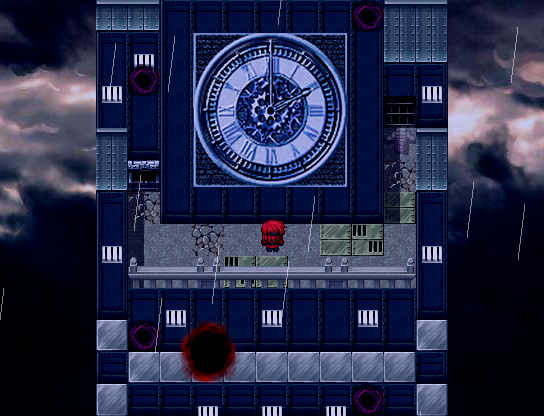 Close
07/23/2016 02:18 AM
I enjoyed "Feral Dreams 2" and agree with your review in general, though I think that the "1 hour chapter" structure hurts the game's "flow". Furthermore, it takes too long until
Show
the whole crew is back together
. Having
Show
a party consisting of only two people for at least one half of the game isn't my cup of tea
; this was also my main gripe when it comes to "Passage of the Hollow Moon". I'm also tired of these overpriced elemental weapons that aren't of any use, and I miss items that permanently raise stat points. Nevertheless, this is an entertaining and satisfying RPG. Like you said, Luiishu535: Whoever played "Feral Dreams 1" should at least try out "Feral Dreams 2".
Pages: 1