"Special Project" was a game being developed by AznChipmunk using RPG Maker 2003 that was ultimately cancelled for unspecified reasons. Admittedly the demo is a bit buggy, but I'm hoping there's more to it than AznChipmunk being unable to solve why the game suffers from some minor visual bugs. After all, those issues were only mildly annoying at most. Though, I suppose the demo being only fifteen minutes or so long means I didn't have to subject myself to potentially seeing the same visual hiccups for hours. So what was a mild annoyance in a short demo might have been a lot more irritating in a longer game. Though I suppose why this game was ultimately cancelled really isn't all that important.

Considering the demo is only fifteen minutes long there isn't that much story content to discuss, but the setup had potential to be interesting. In this game the player much like Yusuke Urameshi meet an untimely end, but our given a new chance at life. Though unlike Yusuke the player isn't forced to raise a spirit beast that will potentially eat them, but our instead sent back in time and given the opportunity to make different decisions on their way to the duel.

Though what decisions were previously made before the player had control of the character isn't clear. As such it's impossible to know if the main character was a paragon of virtue or an evil monster. After all, this is a game about what decisions the player will make. So it's probably best that the player doesn't feel obligated to make the character remain true to their original self. Especially in a game where the player's choices would effect their karma and thus change the overall flow of the narrative. Albeit the developer never really implemented the system in a meaningful way in the demo. He simply promised the system would impact the story in the finished game. So the importance of this system only exists in dialogue or in the game's summary description.

Albeit the game does make a minor if highly annoying misstep during the opening cut scene. For reasons I'll never know the developer decided to have the text for the cut scene appear above the character's heads. 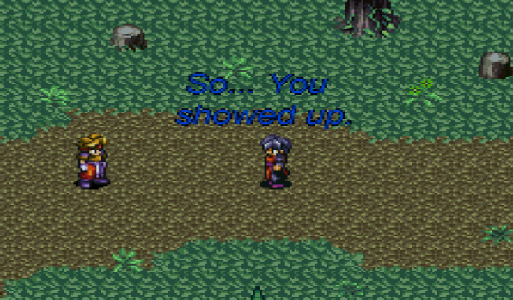 A decision that led to dialogue that just hurts to read since the contrast between the words and the background isn't as great as it should have been. Thankfully the dialogue outside of the cut scenes is presented in the form of text boxes. So it's only this opening cut scene that will make your eyes want to bleed while trying to read the game's dialogue.

On the combat side of things the game doesn't look like anything like your standard RPG Maker 2003 game.

Instead the game allows you to see your character and involves turn-based battles where you can choose your actions from a menu that appears next to your character with your health and magic points being displayed on the bottom of the screen.

On a more negative note half of the early enemies you'll encounter in this game can be readily dropped by simply casting firedrop on them and when you level up you get all of your HP and MP back. So the game kind of encourages spamming your spells since you'll need to farm a few levels in a hurry if you want to beat the witch at the end of the demo. On a more positive note the savages from the North and the witch are balanced a lot better in my opinion with the savages being able to deal massive damage with their critical hits while the witch will take several turns to beat since she's meant to be viewed as the game's first boss. Albeit she's the only boss you'll encounter in the demo.

The game seems to rely on a lot of original assets or at the very least pulled sprites from games I'm not entirely familiar with. Albeit the hawk sprite looks a lot like a certain Pokemon from the Kanto region if you ask me. And the music is largely comprised of remixes from Cave Story.

If you were paying close attention to the gif I used in the gameplay section. Then you'd notice where the player begins the battle and where they end up after the battle are two different locations on the map. After the player's initial appearance they are then teleported to the correct location as the karma system appears. This is mildly annoying in my opinion, but I imagine seeing this issue crop up hundreds of times over the course of a game would be a lot more irritating then seeing it a dozen times or so while playing through the demo.

"Special Project" had a lot of potential to be a good game in my opinion. So much so that it being cancelled feels like a waste. Though at least I came into the demo knowing it was for a cancelled game this time. So it doesn't sting as much as that time I got invested in "Ellie Starling's Very Long Walk". As for my recommendation for this project. Well, this one might actually be worth checking out if you want to try and copy the demo's combat system into one of your own projects. Other wise I'd say give this one a pass since it will only leave you wondering where this game could have gone if AznChipmunk hadn't given up on it.