FFVII was a great jrpg, one of the few of the Final Fantasy serie that spawned sequels, prequels and a movie. Before Crisis, as you can guess, is one of these prequels, in which the protagonists are the Turks, some of the bad guys of the main game. Sadly this game was not released on PC, but hey, here we are to play this sort of conversion...

I'll be clear: it's hard to judge this game since the limitations of the engine are evident. The game could not be re-made easily, so there were to choices: the first was to make the game with the same story but different system and graphics, and the other was to rip the graphics with inevitable loss of detail and simplify the system. The choice of the author was the second.
Was it a good idea? Well, maybe, probably we would have a better game with a different gameplay and better graphics, but we would have lost the idea of "conversion".

This game isn't bad, is simple and linear, but I find the difficulty to be balanced: combat is the usual side view rpgmaker system in which you attack or use the materia to cast spells (that consume mana, of course) and chug potions to recover health (or ether to recover mana). This is ok, I think.

A bit worse is writing since there are some typos (iteNs or get'S in the pic below). Anyway this is a little problem.

Music is really good, probably taken from the game itself, but sounds good.
Graphics are really blurry and not too good, I'm especially talking about maps and scenarios, as instead the charsets are ok and not too bad. The problem is instead when you start combat: characters are big and blurry and there's no gread differences among them. Clearly that was a game of the 2004 and the sprites were not that better, but if you play with a fullscreen monitor you see the lack of details. Mapping is bare bones but serviceable.
Oh and another problem is that we are forced to play as "Shotgun" the whole game. I would have preferred to have a party with a couple of other Turks, just to add variety and strategy possibilities, and it would have not modified the story (just a squad of three members, and maybe more enemies, to balance this choice) 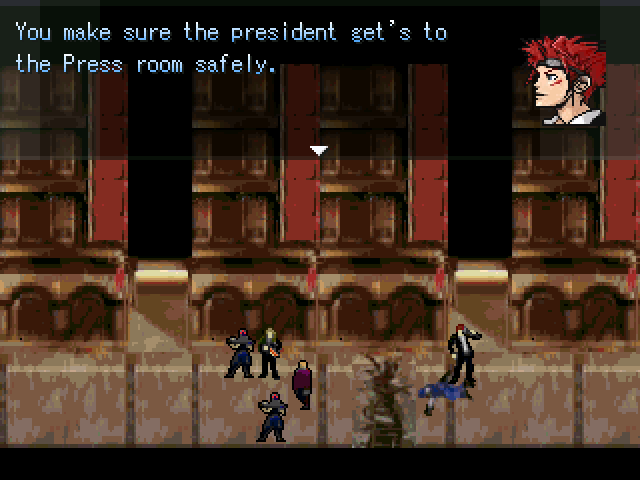 The Verdict
As I said in the title this was a nice idea! Maybe many features of the original game were taken away but if you want a sort of visual novel with standard Rmk2003 combat in which you have to manage the resources, well you have it. Just do not expect side quest, complex inventory and party management, no, this is a linear adventure in the FFVII world.

So... regarding the score: mine is 3.5 because I love FFVII and I'd love to have a game in which you play one of the Turks.
If you do not care about FFVII but you like simple rpgmaker games, it will be a 3 for you.
2.5 if you expect quality graphics, perfect writing and a complex mapping and developed gameplay.

So, yes, there are no bugs and game breaking problems, the result is an ok game (issues are mainly due to the engine limits), but I appreciate a lot the attempt and the effort to make this game as close as possibile to the original.

Close
09/30/2019 03:27 PM
Thanks for the review! I agree with you on the battle system. My first plan was to make it action based, just like the original, but in the end, playtesting and balancing all the variables would be too time-consuming, and i was honestly burned out at the time.
TheRpgmakerAddict

author=richterw
Thanks for the review! I agree with you on the battle system. My first plan was to make it action based, just like the original

Hey I liked the battle system. I mean, I never played FfVII:BC, so it's ok. It's a bit basic, but this is not a bad thing.

The real problem were the blurry graphics: I understand it was impossible to find decent rips but at the same time the use of the usual Rmk2003 charsets would have not been a good idea, I think. Well I do not know... anyway it's ok and surely it required quite an effort! (For some reason these charsets remember those I saw on some obscure rmk games Killer7sindrome/DaydreamCafe).
Pages: 1