The man wth no ̶n̶a̶m̶e̶ story

Howdy!
Today I'll review "Mystic Western - Minecart Mini-Dungeon", a game by Blazebat (author of the previously reviewed "What The Hell??!!")made with RPG Maker XP that reminds to me another game I recently reviewed: Kentona's "I Expect You To Die". Why? Well both games are short, set in an underground cave with traps and feature two characters only (excluding some animals). And both of them can be defined as short puzzle game adventures.

In this game we play as a gunslinger called Magic-Shot McGee (curious since McGee was the on who hosted the competition that spawned "I Expect You To Die"), but we do not know anything else beside the fact that he has just blown up a hole in a wall to enter some sort of cursed mine where the mine carts move autonomously! Whoa! Which will be McGee's goal? Well simply to collect some sort of treasure, at least this is what we can understand from some symbols and emoticons that our hero uses to express himself, since there isn't a single word, except for a "HEY" that our gunslinger will shout just once! 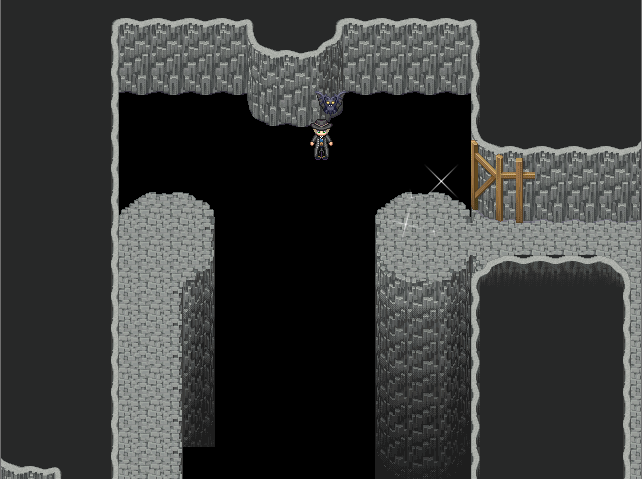 That bat isn't just pretty big, but he's even able to carry McGee across the chasm!

What will expect you here isn't something much different from what we've seen in "I Expect You To Die", except for the absence of a time limit, and this is something I like. For the rest expect to avoid moving carts (instead of the more classic boulders) push crates (instead of the more classic bounders) and use items... well there is just one, anyway it's all pretty basic and simple, and luckily there are really few ways to die (like jumping in chasm and destroying the world! And this reminds to me of "What The Hell??!!" for its silly deaths), because this game shares another characteristic with the previously mentioned game: the impossibility to save... EXCEPT that you can actually can find a save point but right before the ending, just one step before the final confrontation.

Well yes, unexpectly here the game includes also a battle, but it's pretty much a short duel you can win in two rounds: Magic-Shot McGee is really full of resources, since he has several attacks available, elemental bullets, poisonous shots, a healing power (that trust me, you will not need), and even an attack that is "really effective against goblins". Sadly there are none here (but the descriptions aren't meant to be serious, come on, one even tells that the name of the ability is mispelled!). Anyway the opponent is pretty weak and harmless, so I'm pretty sure everyone will finish the game on the first try, since the only dangerous parts, if I am right, are on the first section.

Now, the game is super-short and pretty simple, but apparently it's supposed to be a side story of "Mystic Western", so I understand why the protagonist is not properly introduced and we mainly know that he's a cowboy from his appearance (his rival appears like some sort of Indiana Jones lookalike, so it fits too). Surprisingly the game features a really nice ending cutscene.

Visually there isn't much to say, graphics are what you can expect from a classic RPG Maker XP game, still there are same custom or not Rtp parts that give a more western feeling to the game, like McGee portrait (seen during the battle), the pixelated battler of the gunslinger, and also the music, that I found pretty appropriate. About the writing and story... well there are none, yes not even dialogues (a bold choice that I can approve), so let's finish here the review! 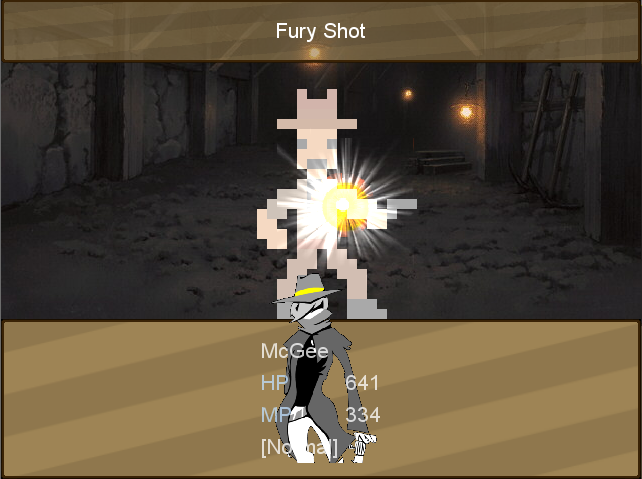 I attack the pixelated Indiana Jones clone with the Fury Shot, a powerful special attack! Uh the description says that's powerful against goblins, pity that there are no goblins here, but lead is still lead!

Final Verdict
Well there isn't much to say about this game, pity because I'd have liked a more extended intro and some more rooms and puzzle, but at least this means that what I found was ok, since there were no errors, unsurmountable obstacles and challenges, on the contrary the game is very easy and lacks of that something that would made it memorable (like "What The Hell??!!", and that's a pity because the western setting is rarely seen used in rpgmaker games!), anyway it's still decent even if too short!