I decided on writing a review for this game because it didn't have any by that time despite the fact that I liked it so much. Please be tolerant of my poor English.

In this review, I will try not to mention about a thing that could be a big spoiler of the game's important part.

This is a short RPG that can be light-heartedly enjoyed, as of the game's author says "with a warm cup of tea". If you are a native English user, it probably will be less than just one hour to complete. It was around three hours in my case, though! 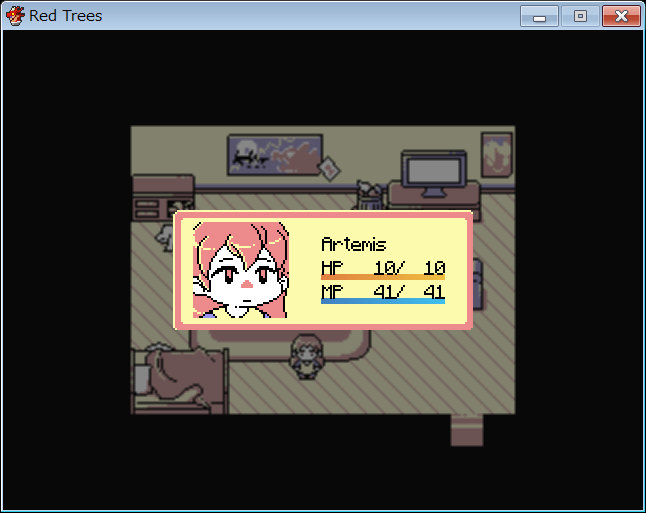 This is you, Artemis, a cute little girl who *basically* doesn't speak as same as the many RPG protagonists.

This game has almost no real exciting content to speak of. No battles, no legendary sword obtained after lots of effort, no demon king to be defeated. This is generally a game in which you can have fun of wandering around a town that all sorts of folks are living in.

So, to be honest, I think this is not so exciting for some people. But aside from that, I found this game was somewhat interesting, and had a pretty enjoyable time. Oh...why?

Once you get started you may want to go straight ahead into the forest and smash some wild monsters and evil dragons, to earn some exp point and golds. I'm sorry, this is not a game of such kind. On the contrary, you can't easily get out of the town.

Gameplay is simple enough: You get an item at some place, and give it someone who wants it, you then get an another item in return, and so on. Also called "trading-stuff", "fetch-quest", or "Why-don't-you-do-it-yourself?", which is almost all you do to progress it. ...wow, this must be boring!! However, for some reason, this could be a fun moment for some people like me and rather an appeal point of the game.

Actually, this is the main subject of the game. 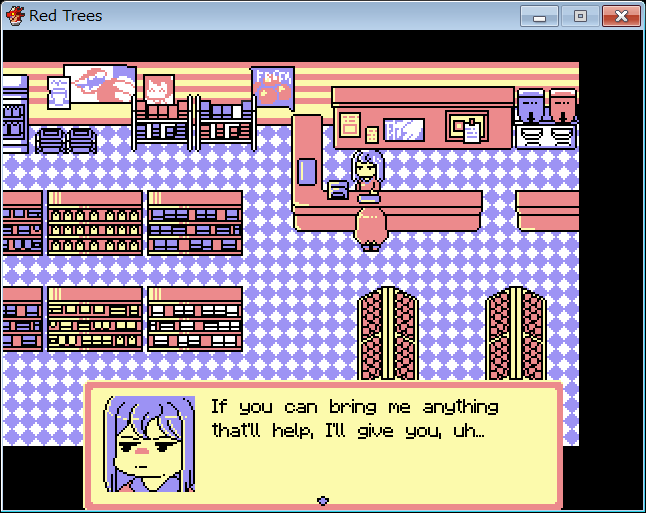 Could it happen to be a catgirl? Yay, I'm getting excited!

On this particular game, trading stuff was not boring to me. It was a fun experience instead. Because there were quite a few *little surprises* for the trading activities you do in the town. For example: you give items to not only humans but also animals; there is a person that will give you an item as an unexpected result that's not on purpose; there is a person that gives you an awful thing you will most likely never need but which is somehow useful for a specific person.

It may be still not exciting at all for some people. Yes, I should admit that these aren't so incredible ideas that could interest the players to know more about it. But the game actually is really well organized in a solid, tranquil, and humorous way. Sometimes there are no explicit hints about which person you should go see next, which may make you feel lost and get stuck. But if you carefully talk to people and watch their rooms and things while on your way, it is very clear or reasonable where you should go to next.

Little fun things can be found in a very daily life situations.

This is a great point of the game. Everyone in the town has his/her own look and face along with thire own personality, even with thire own interests like a real person. 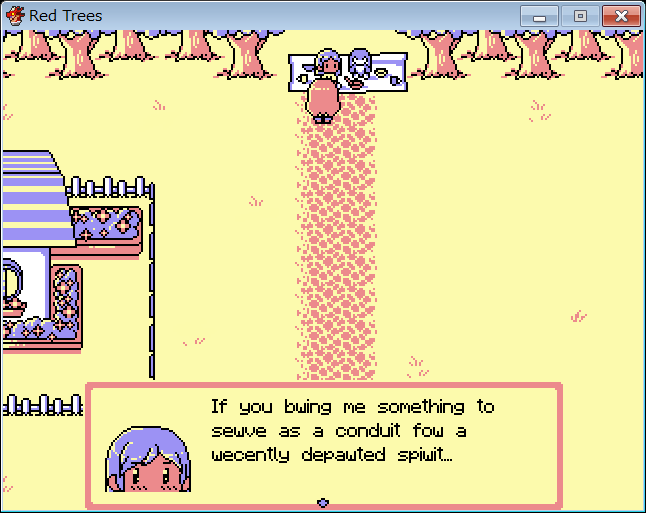 There are too many "w"s in her pronunciation. Though her mouth is hidden, I bet it also shapes like a "w".

In the gameplay, you can interact with many objects such as posters on the walls, trash cans of other people(Oh, what?), goods and shelves in a shop. Some of them respond very normally, but some of them respond a bit silly and funny dialogue. The author must have a good sense for writing. Especially, when I interacted a photo and read "a giant photo of a cat, or a photo of a giant cat", in spite of myself, I looked up my room's wall and saw a calendar that had a kitten picture on it. No one could have any definitive evidence that that kitten isn't a gigantic kitten.

The art style of it is very flat, simple, and cute. I don't know how I should exactly call it but it's a Gameboy-like? The very few colors are well used in drawing the maps, characters, and faces. Totally comfortable.

It is a remarkable aspect of the game that the face graphics are nothing but just cute. Furthermore, the folks in town all look like children, including the parents of Artemis. The faces may look too flat, but actually have a fertile expression on each of them. I like them much more than the VX's gorgeous, detailed asset face graphics which I can hardly feel any affinity for. 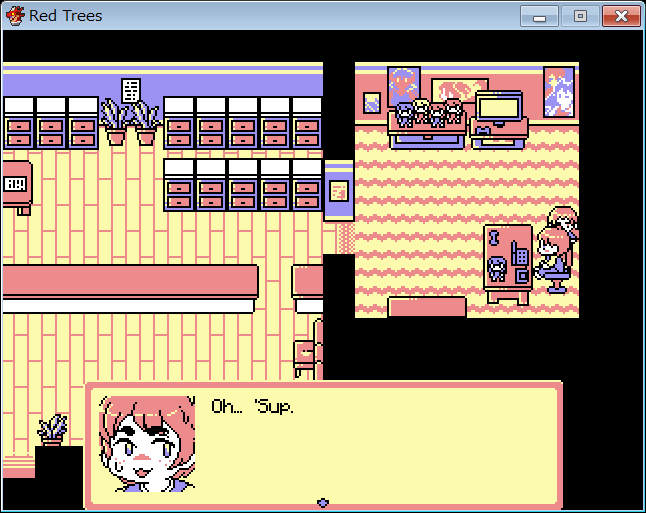 Look, another cute kid here. but he is in fact the mayor of the town Artemis lives in.

About the music in this game, I wouldn't say that it's really fantastic, but its simple tone suits the game's calm atmosphere.

Although the author says that it is "with mild horror elements" in the game's summary, I'd like to stress that this is not a horror game. There is no jump scare, no psychopath, no ogre that obstinately chases you and/or somehow happily frighten you in the game. So, there is no need to worry about that and hesitate to play even if you are not good with scary things. (except for those who badly love bunnies)

Yeah, but I do agree that a mother who likes to go through others' rubbish cans is perhaps a horror element. My mother doesn't. Thank God! 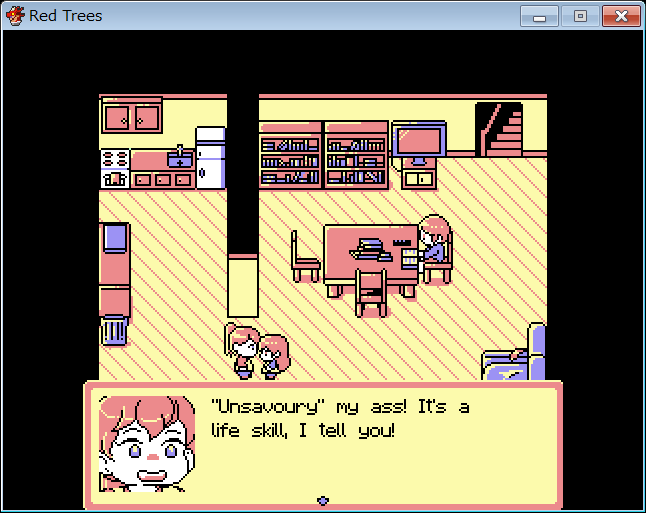 About a run button

If you have a plan to make a game, I'd like to suggest a run button to be enabled by some means. Otherwise people who have played your game will start asking so eagerly about a run button. (because we love running!)

This game was really one my favorite, so I was going to give it full 5 stars, but finally I put it 4 after much of consideration, because with some objective view for it this game maybe too short and perhaps still not so exciting to many people.

About the ending of the game... I think it's *okay* and much like it, although it is a little funny, in a good way. Brilliant work! XD

By the way, this is my first review that's approved. Now I feel thankful for the author creating this game and opening it to the public on RMN. 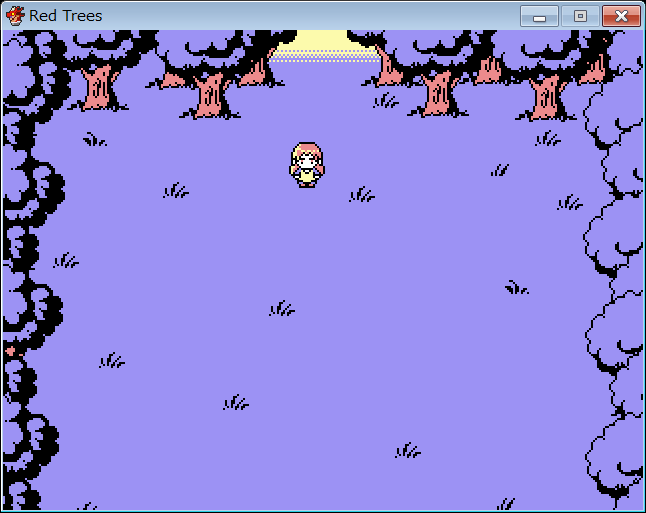 At last you are in the problem forest alone. A little but at the same time biggest surprise of the story is awaiting you.

Kylaila for kindly proofreading this review with a lot of helpful suggestions which surely improved it and also my English too.

InfectionFiles for inspiring me by his/her wonderful review A Fabulous RMventure! and giving me lots of advices how to write a review.