Fan the Sea is a noncombat, interactive story game, that uses the tension and uncertainty of lying to invoke contradicting and competing emotions from the player. You play as Isaac, a master spy, who's trying to uncover the secret operation "Fan The Sea" while maintaining his cover. At its core, Fan the Sea is both a love story and a conversation about authenticity.

As you progress through the game by uncovering secrets through interacting and manipulating those around you, you begin to witness the interconnected effects of how the lies you tell and the choices you make impact the world. The challenge of the game lies in the player being forced to keep his lies straight: remembering and managing what he's said, left unsaid, promised, and behaved all impact the game. Isaac's consistency, relationships with the NPC's, and choices determine the ending of the game. How many masks can you wear?

Yet Isaac, "The Man of Stone" has just received his final mission: to uncover the mystery behind an intercepted enemy letter. The letter contains critical information about the infamous enemy operation, known only as "Fan the Sea". As a veteran spy and one of the last agents alive, Isaac knows better than most that "Fan the Sea" is the opposition's best kept secret.

Called into the briefing, the intercepted letter reveals that "Fan the Sea", whatever it is, is directly tied to the small isolated port city of Far Water. To complicate things, aware that their message was intercepted, the enemy has issued a travel ban within their borders and doubled security in the area. This, in conjunction with the small population of Far Water, would force Isaac to fully integrate into the small society.

If able to convincingly integrate himself in Far Water, Isaac would be unable to leave the town to report his findings. As such the agency announced the lone wolf's forced cooperation with the only agent they have left: Claire, a promising new recruit. With Claire in possession of a stolen enemy ship, the two are to rendezvous on the outskirts of town in secrecy. Claire is Isaac's only connection to the mother country, and Isaac is Claire's only means to bypass the travel ban.

This is their story of espionage, love, and betrayal.

Fan The Sea handles similar to other interactive story games (read: Firewatch, The Vanishing of Ethan Carter, Gone Home, To The Moon) with it's main source of entertainment and fun deriving from the it's story, characters, and dialogue. What makes Fan The Sea unique is the "Suspicion" system.

The "Suspicion" system works like this: it starts off with every dialogue option and physical action available to the player having a characteristic associated with it. Yes you read that right, every dialogue option and physical action. Embodied is obsessed with story and prioritizes immersion: If Isaac can touch it, you can interact with it. There are four characteristics and their opposite effect, for total of eight, that the player will balance over the course of the game. Each dialogue choice will result in a +1 in whatever category they acted in. Isaac gains +1 "Suspicion" if any of the categories below fall into the red. 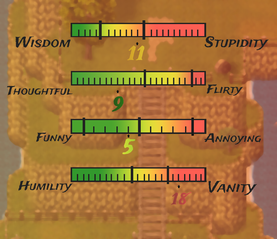 The catch is that each character is different, with their own personality, backstory, and judgmental tendencies. The chart above belongs to Harold: an old war vet who's living out his days a farmer. His chart shows us that it's harder to appear wise in his eyes, and that it's pretty easy to annoy him. Be mindful of that.

Now before you think: "Ah, why that's easy Josh! That's simply a matter of finding out NPC tendencies and preferences, then going on fetch quests!" I say "Ha! Good luck with that!" The game is intentionally designed to mirror reality. Let's say that you found out that your neighbor has a fat crush on Selena Gomez, yeah? So then you go out and buy them a bunch of paraphernalia. Cool. At first they might appreciate it and you'll get some real life thoughtful (but maybe flirty) points. Yet if you keep it up, that neighbor is definitely going to feel like you're schmoozing them, and begin to wonder why you'd want to schmooze them in the first place.

The world we live in is becoming more cynical every day, and Embodied is dedicated to mirroring reality in Fan The Sea. If you can't see your actions working in real life, don't try it in game. These NPC's are human: you have to truly get to know them and their stories in order for them to trust and open up to you. The purpose of these eight characteristic traits is to effect the NPC's behavior towards you, more than it is to get you "Suspicion" points. 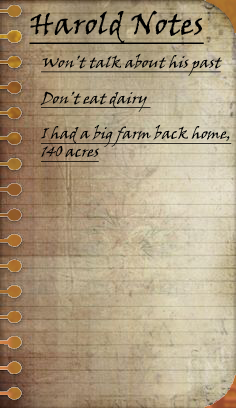 The "Notes tab" at the top is where the player can keep their own notes that they write for each conversation, to help them keep track of their lies. Isaac and the player can reference this at any time, but it's important to remember that there is no pause button in Fan The Sea, and that your notebook is a physical in game item. Better keep that bad boy out of sight: if someone else were to read what you've written it could be damning.

"AHA!" you say. "Why don't I just use real life paper, or open a document outside the game? Hmm? Hmmmm??"

Exactly! Isn't that neat? If keeping the notebook in game is too difficult, having the same perk available for no risk is a developmentally built in "easy mode". It leaves the player feeling rewarded and clever, instead of feeling like they're cheating. Even though they are. Low key. But that's okay! Fan The Sea is all about being clever, and if your cleverness takes you to places outside the game, great! Do it! And if you insist you don't need the notebook and can remember every lie you that comes out of your mouth (fingers?) well, good luck.

What Isaac really needs to worry about, is if three NPC's acquire max "Suspicion". At which point, they will bring their concerns to the Captain of the Guard, who will hold a special town meeting. During the meeting Isaac is going to have to bank on his other relationships apart from the three that are accusing him, and those others are going to have to defend him. If Isaac can make it out of a town meeting, where the sole purpose of its gathering is to determine his credibility, it's a miracle. These things are tough, but not impossible. But be careful: just having a town meeting raises the entire town's "Suspicion" of you, and damages the few positive relationships you have. Avoid this.

Ranging from making sex jokes to always making the conversation about yourself, negative characteristic dialogue has a detrimental effect to your reputation. These are the dialogue options that can be classified as being stupid, flirty, annoying, or vain. Instead of thinking in terms of "What, if I make a bad pun they're going to think I'm a spy?" think of it like you would in real life.

Imagine you don't click with a stranger, and they exhibit traits that you disapprove of. Yet add to that, that your country is at war, tensions are high, and there's rumor of a spy in the area. Now tell me you wouldn't sarcastically and somewhat hopefully joke and complain to your friends that you wouldn't be surprised if this prick of a new guy is the spy.

While NPC's that dislike you and have more "Suspicion" than others might not flat out accuse you of being a spy, they're going to be a lot less inclined to defend you if you ever get accused (which you will). This is the first and least impactful category of the three.

This is the meat of the game. If you've ever told a lie before, you know that you have to remember it in case you're called to follow up on it. Fan The Sea is a game that forces you to grapple with the tension of lying and manipulation as you build your web of lies on top of each other. (Note: It is possible for you to tell the truth in every situation, just like real life. But also like real life, the truth can get you killed. But so can lying. Your choice). The opportunities to lie are endless in Fan The Sea, it's the bread and butter of the game. From NPC's asking you where you're from, to your opinion on their bug collection, to if you love them, your words are your weapons. Choose them wisely.

If you tell Harold you're lactose intolerant to get some nice pity points and have him warm up to you by talking about being raised on a dairy farm, but then he catches you eating ice cream at the town carnival, you're going to have some explaining to do. The most exciting encounters will be in events where NPC's that normally don't interact together (like the baker's kid and the Captain of the Guard) interact together. This will take on the form of

These are flagrant and obvious forms of treason or foul play. This occurs when Isaac is caught stealing, ease dropping, meeting up with Claire, and even when (if) you tell people you're a spy. These events trigger real time events called "Condemning Action", with a count down timer and dialogue options. If you've ever been caught in a lie, this is that feeling. And before you pat yourself on the back for finding a typo, the second response of "Yes I am", is intentional: when you have to come up with an explanation on the spot, your words don't always cooperate. We're striving for realism here.

Isaac will have 3 seconds to choose a response that is based on the situation he finds himself in and his past actions and relationships.The 3 second count down will continue for each dialogue option for the duration of the conversation of the "Condemning Action". If you fail to pick a response within the three seconds, you'll gain an incredible amount of "Suspicion", and the cycle will repeat until you pick an answer, or their "Suspicion" is peaked. If their "Suspicion" is peaked after or during a condemning action, an accusatory Town Meeting will immediately take place.

Condemning Actions aren't impossible to get out of, but they're terrifying. Hope you remember what you say during them.

If you like what you see, check out our Kickstarter and Steam Greenlight page for more information, and how you can help make Fan The Sea a reality! 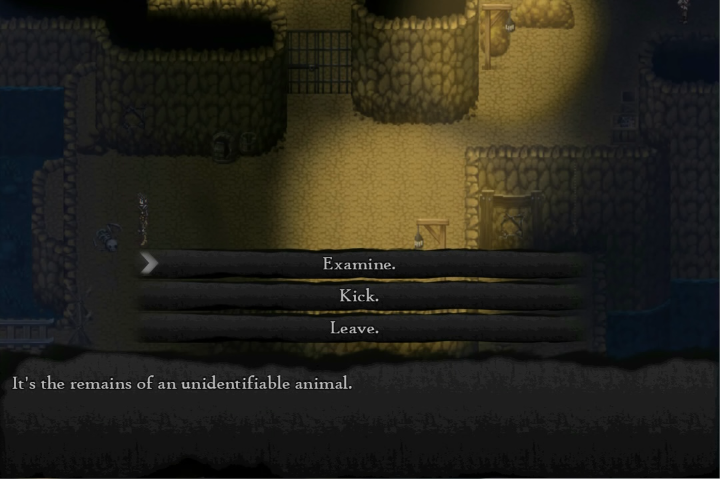 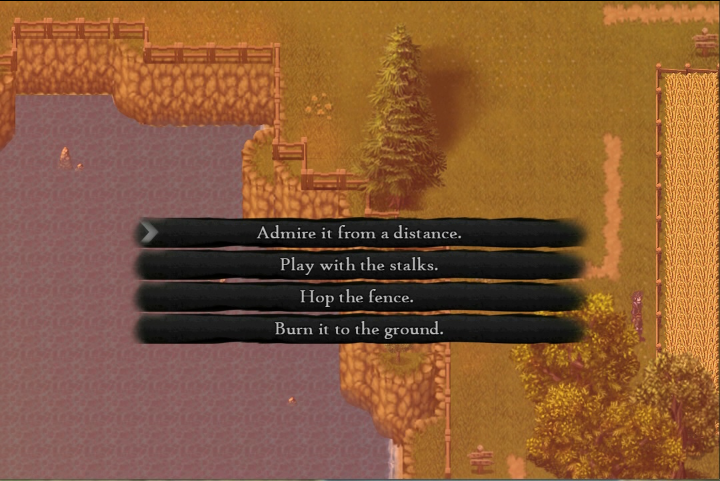 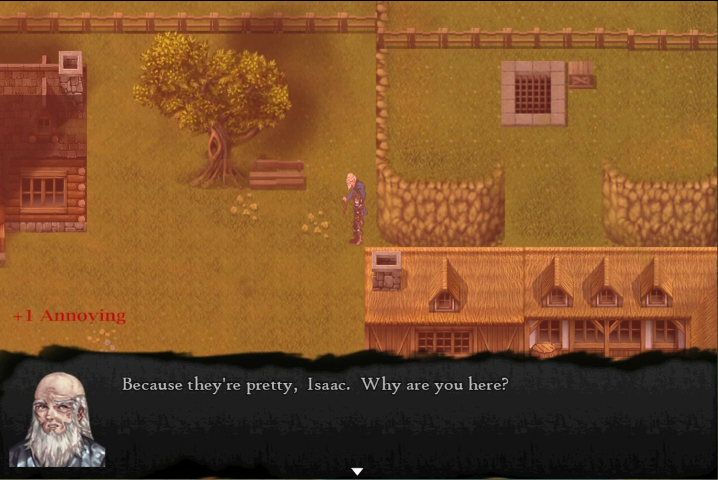 Fan The Sea is currently at 28% of its $10,000 goal on Kickstarter, and is still in in the midst of its Steam Greenlight campaign.

Also I love the pun.
MasqueradeJacker Close
08/22/2016 09:54 PM
Man, I'm looking forward to this title. A noncombat game where I have to keep all my choices in mind and make sure they line up AND work my way into the lives of people? It looks really well made and I can feel the love in this game,I will wait further news of this game, good luck with it!

Hey, I don't know if you guys at Embodied already now this, but there's a thing called Game Developers World championship that'll let you, indie developers enroll for free, if you haven't joined yet, do so, because the joining only lasts until 30/9. It may give you guys more oportunity to do this. https://thegdwc.com/
Pages: 1