Hope everyone is having a great Sunday! You’ve already gotten to meet main characters Finn, Aria, Eris, Kael, Azzam, and Scatia. But there are other characters you need to learn more about - one of them is Geddo.

Geddo is believed to be one of the few remaining Norns – people who originate from the destroyed swampy forest of Finnias, in the South. As proficient in witchcraft as he is, Geddo is unable to use his magic skills to cure Eris, his sick daughter. This is why he decides to travel all over Legrand to procure a rare herb called Mengkhaddu – it is the only medication known to ease her symptoms. 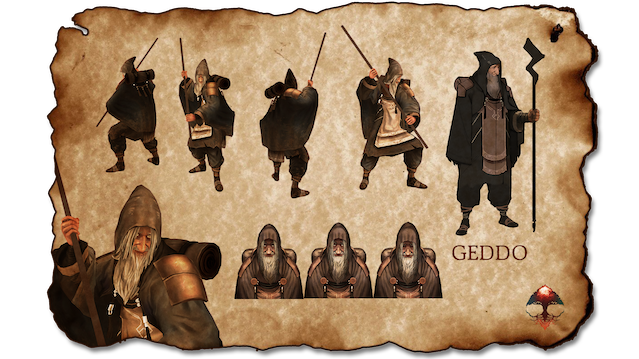 If you have played our Pre-Alpha Prologue, you’ll recognize the hooded old stranger who helps Finn escape from Jubla Arena. As luck would have it, Geddo is in a rush to bring the herbs back to Eris and therefore decides to hire Finn to help him as they journey across the dangerous Rahas Desert. In return, Finn promises to protect Geddo to repay his kindness.

What do you think of the old man so far? Have you managed to finish the Legrand Legacy Pre-Alpha Prologue? Let us know in the comments below!