Hello everyone! By now you've probably enjoyed our Pre-Alpha Prologue and have come face-to-face with Klahmaran, the build’s epic boss. 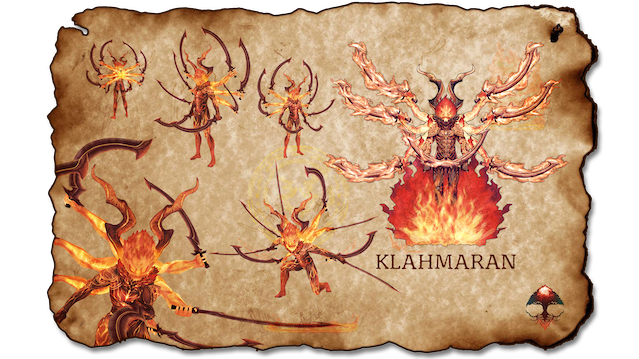 The prophet Lazarus, who was getting old and weak, assigned his infernal flame to take the form of this eight-handed fiery giant to protect the Dringr’s Keep. Klahmaran is to fight away any incoming threat, and eradicate other evil forces in Legrand. Although its creator is long gone, Klahmaran remains loyal and stays its ground as the watchful protector of Lazarus' chamber.

However, the creature, who cannot control its infernal fire without its master, eventually ends up leaving the chamber, later becoming a rampaging beast out for blood.

Some players have told us they’ve been struggling to beat this boss but, as you saw in yesterday’s live stream, our own Uwil took on the boss and showed everyone that, yes, you can indeed defeat it! Have you managed to beat Klahmaran? How did you do it? Be sure to share your strategies in the comments!