I played this game a loooooong time ago. Well it was the original spanish version, and I had fun. At the time I had few experience with Rmk2003 games so I did not know what I could expect. The game was a classic fantasy adventure with humor added, silly characters (I love the peasants that give you the hint at the wrong time, and THEN they rejoice when you talk to them at the right time!)
Guess what? This game is still quite funny, and this english translation isn't bad at all! (all the references are mainly to jrpg games, so... if you know them, you will laugh, well... I hope so!) 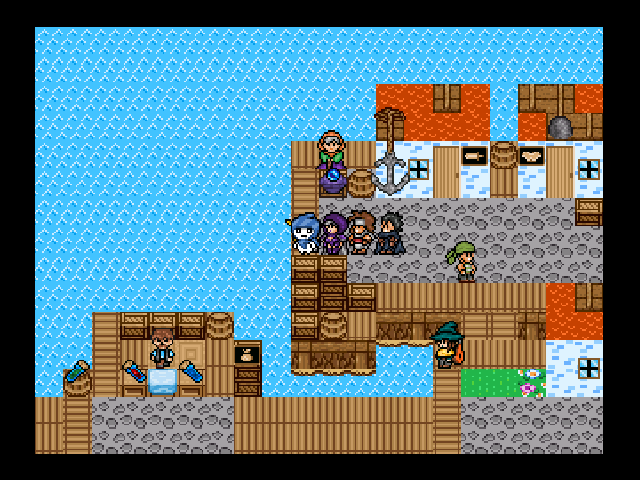 Looking for a boat (yes, you will have a boat, like in every other jrpg!)

A parody game
Monigote Fantasy is an old game, as I wrote before I remember it from looong time ago: what it impressed me was at first the graphic style that uses what I'm pretty sure are custom charsets, chipsets and facesets. They are nice and create a colorful world that mimics the old jrpg games (probably the first ones given the semplicity of the maps. Still you will find acid rivers and various obstacles). In fact Monigote Fantasy is a parody of the genre.
The silent... well, mute protagonist is some sort of paper doll that acquired a magical sword and for this reason was forced to become a hero. The first mission is the usual evil dragon hunt, and that's when he meets the three other members of the party (that provide a lot of funny dialogues): a dumb barbarian, a sexy black mage, and a cynic rogue.

The game is an excellent parody of the jrpg tropes and situations, you live in a world where people die but can be resurrected using a feather, where some peasants were adventurers that changed class, a simple indestructible bush can block a road, and people contastly remind you that they live inside a game.

So how is this game? Speaking about the gameplay I found combat to be pretty easy, but this is the game you will play for fun and for the storyline, not for engaging challenges. Anyway there are lots of items, equipments and also cosmetic items like hats/clothes that our silent hero can equip. There are also collectibles and secrets that will let you earn some particular items (Oh and I liked a lot the idea of the magic bag that you have to use to check the the collectibles, keys and the clothes found. Just press shift!). Oh there are also puzzle and minigames included!

Ok back to combat! This is the usually side view, with static weird opponents (such as pokemon parodies, invisible naked ghost pirates and trees. Yes, normal trees!) and animate battlers, that use the same style of the rest of the game (so, no rips!). As usual enemies have different powers like poison or stun, and characters have abilities they will earn levelling up (healing, strong attacks and so on). Also basic attacks are differents, as swords do damage but have no special quality, whips do few damage but hits everyone, daggers are weak but hits twice, and axes... well nobody uses them, so sell them!

Music is good and partially custom, in fact there is the use of some familiar tunes and sounds from other games (like the Mortal Kombat "Toasty!" when you escape from combat!). 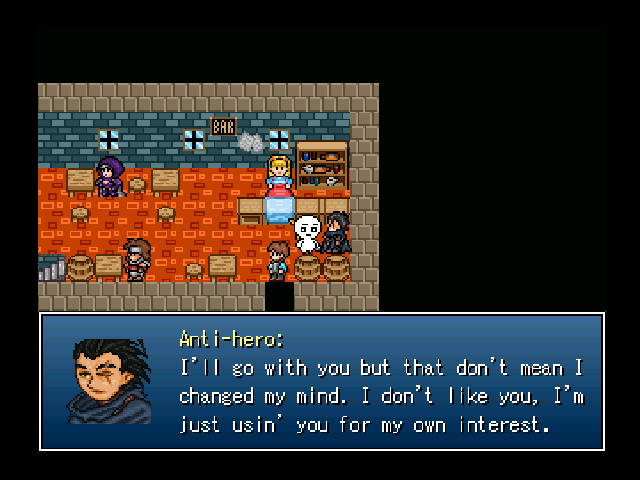 Well, at least he tells the truth!

The Verdict
I do not have much else to say about this game: it's a simple parody with no great surprises or particular gameplay or original backstory and setting, but the dialogues are good and entertaing, there are jokes and comedy, and I found the translation to be adequate. The game, as I said before, is pretty easy even if there are some parts where I think that some hints were needed (for example to obtain the magic torch you have to give the Grog to the elf, but NOBODY tells you that. I just figured it by chance, or maybe I missed the guy who explained this course of actions, who knows!)
If you do not like the humor... well there's still a nice game here, and a colorful setting (even if not original at all and quite generic, but, as I said a thousand times, this is a parody... about cliches!).

So? For me it's a 4/5, it's an old game but well done and fun to play. Fully custom graphics, minigames and is also quite long. It lacks of a little something that some other recent games have (maybe more complex maps, or more complex and original backstory), still it's a good and entertaining experience. Approved!

Close
09/17/2019 01:03 AM
Thank you very much for playing our game and taking the time to write such a thorough and kind analysis.
We've put a lot of love and care for details into the game and every time we feel we've touched someone's heart with our work, we know we've done the right thing.
As you rightly remarked, the graphics are fully custom. We wanted to go for a simple and retro-looking style and design as a tribute to all those old-school JRPGs we love so much.
As for the clues, in the first part of the game, you can ask the king for advice if you get stuck. It's particularly useful, especially during all the bush part.
Also, ever since you get the boat, although you can complete several of the missions in whatever order you want and take your time to explore the world, Mofi will always stand by the rudder and give you clues as to what to do next.
In fact, there's a lot of pretty useful stuff on the boat, for example, there's an old man who will give you a compass that shows your location on the world map. ^^
Once again, thanks for your review and rating our game with an awesome 4/5.
TheRpgmakerAddict

author=BitBrosGames
Thank you very much for playing our game and taking the time to write such a thorough and kind analysis.

author=BitBrosGames
As you rightly remarked, the graphics are fully custom. We wanted to go for a simple and retro-looking style and design as a tribute to all those old-school JRPGs we love so much.

I liked the graphic style as it quite different from other games that use the same engine and it's also coherent.
I said that the game is easy, but I should have said that this game is for everyone as it's really simple and never frustrating at all. It reminds another parody Jrpg, the italian Tales of Banalia (sadly untranslated) for all the gag about the typical jrpg tropes. Oh and as I said the translation is really good and well done (and sometimes that's not easy thing)!

author=BitBrosGames
As for the clues, in the first part of the game, you can ask the king for advice if you get stuck. It's particularly useful, especially during all the bush part.

I did not know or expect that (I did not want to go back, even if you need to buy a "certain item" for that quest in the castle), anyway I was able also to find the "secret" area without the hints.

author=BitBrosGames
Once again, thanks for your review and rating our game with an awesome 4/5.

Well deserved! It was a shame that there were no reviews!
Firefly84

Close
09/17/2019 08:18 PM
Well, I tried to ask the king for hints but he never changed his first answer until I did the riddle and then again.
BitBrosGames

author=Firefly84
Well, I tried to ask the king for hints but he never changed his first answer until I did the riddle and then again.


I thought we had already fixed that. Did you play the last version we uploaded?
I'll check it anyway. Thanks for the info.
Firefly84

author=Firefly84
Well, I tried to ask the king for hints but he never changed his first answer until I did the riddle and then again.

I thought we had already fixed that. Did you play the last version we uploaded?
I'll check it anyway. Thanks for the info.

Will only update for the full version. Still trying to get the mouse costume.
Sometimes I wish the MC would say "NO" to the reaper.
Pages: 1