5 reviews
Save to Dropbox
RTP is a short, fast-paced RPG, with a heavy focus on battle encounters that forces players to think about their every move.

Recruit two Heroes at the start of the game that will help you beat the big, bad monsters! With nine different, playable classes, all with their own unique skill sets and specialties, multiple playthroughs are encouraged!

Battle against the forces of evil that invaded your hometown! But don't get over confident, as even the weakest of enemies are able to take big chunks of your life if you aren't careful! Use your skills wisely and manage your resources correctly, and you shall emerge victorious!

Random Hero selection and starting location at the beginning of every new game allow you, the player, to create your own story! No pesky dialogue boxes or long, drawn out cutscenes to slow you down!

Defeat the evil monsters, and ultimately, their all-powerful overlord to win the game and rescue the people! However, beating just the big boss is not the final challenge of the game! Can you achieve the fabled 11 star score at the end of the game by completing all the achievements in a single run!?

Warrior: The Warrior is a simple and beginner's-friendly Hero to play as. His playstyle largely revolves around drawing the attention of the enemies and reducing most of the incoming damage.
Ranger: The Ranger excels in hindering the enemy from doing large amounts of damage. But if needed, he can dish out large amounts of damage against big groups of enemies.
Mage: The Mage makes for an excellent support fighter, thanks to her ability to grant MP to every Hero in the party. She's also great at dealing damage, whether that be single-targeted or hitting every enemy on the field.
Paladin: The Paladin isn't afraid to take damage, instead, it fuels her own skill, allowing her to strike back at all enemies with part of the damage she has taken during a fight. When not taking damage, the Paladin can also shield herself and her allies from getting hurt!
Alchemist: The Alchemist is all about using crazy potions and likes to experiment with all sorts of things. But don't let the random nature of his skills fool you. The Alchemist has plenty of tools at his disposal to make himself a valuable ally at your side!
Cleric: The Cleric does what you'd expect her to do. But on top of healing her allies, she can also prevent her enemies from powering up, making her an outstanding support fighter.
Berserker: The Berserker likes to hit things hard, and so that's what he does best. Simply power him up at the start of a fight, and watch him proceed to slaughter his enemies with ease.
Assassin: The Assassin feels most at home in the shadows, where he's less likely to take hits from monsters. He also likes to wait for the best moment to strike, such as when an enemy is already bleeding, or when they lower their guard when charging an attack.
Warlock: The Warlock can summon a Minion at his side, giving you a 2 for the price of 1 kind of deal. While the Warlock can steal his enemy's fury to use for himself, his minion can power up itself and either assist in battle or return to dust and restore the Warlock in dire situations.

I first started working on this game when RPG Maker MV released. The goal was to create a short RPG, entirely made with RTP assets (hence the game title). In the end, I did made a few minor custom graphics, but 99% of the game consist of RTP art and sound. I've also included a fair number of plugins for better playability and quality-of-life improvements that the vanilla editor couldn't provide. Another aim with this project was to create a game completely devoid of any dialogue, as I wanted the story to tell itself through gameplay and player imagination. It's just one of those things I've always admired of games that managed to achieve such a thing, and so, I wanted to try my hand at making one such game, myself.

ABOUT PASSIVE SKILLS
The RTP v3.0 update introduces passive skills to the game. Passive skills are skills that cannot be actively used, but they will automatically activate during combat when certain conditions are met (such as when a certain skill is used, or once at the end of each turn).

First, to increase the range of randomness per playthrough, which in turn helps with the replayability factor of the game. RTP was created with replayability as one of its main selling points, and I thought this would be a good addition to improve upon that.

Allow for more options on how to play characters. During my playthroughs of the game, I found out that a lot of characters are bound to very limited ways of being played efficiently. For example, Ranger would generally use Preparation, and then auto-attack for the remainder of an encounter, as it was simply the best it had available. With passive skills boosting some of his other abilities, Ranger can now also function as a support unit (Soothe to control bosses, and Nature Force for a party HP+MP heal).
For other characters, it was more of a way to simply boost their performance. Like, Paladin always had a very hard time recovering from a death, since she relies so heavily on Martyr, which often gets her killed if she's not at high health to begin with. Paladin's passive skills help her survive much more easily, so she can do her job properly without becoming a liability after dying once.
Additionally, passive skills are also there to up the pace of combat. Sometimes, things could slow down, which wasn't exactly ideal in a game that's all about providing a quick game. For example, Alchemist could stay stuck in a cycle where he could pretty much only cast 4 MP potions, and never recover enough MP to go back to casting his flashy Mad Science. Again, passive skills are there to help out restore MP more frequently, so costlier abilities can be used more freely (without making them completely spammable, of course).
Finally, to follow rule of cool. Some passive abilities are there to enhance, but at the same time also give that feeling of power and coolness when they active. Such as Alchemist's chance to double cast abilities, or Assassin's chance to instant-kill enemies (including bosses (at a reduced chance rate)).

As a side-effect of having passive skills added, I feel class achievements function much more like mini-quests now, rather than just an optional thing to do for completion sake. Doing class achievements now actually help power-up a character, so that should be a good incentive to go hunting for them as fast as you can.

LOOKING FOR FEEDBACK
As always, I'd like to know what you think of the game, if you decide to try it out. Knowing what works and what doesn't is valuable information I can use to improve RTP, or any future projects.
I'm mad scientist. It's so cool!

Mirrors in RPGs. They're always so good to you.

Today is the day you get to prove yourself as defender of this town! Go get 'em, hero!

If this doesn't like it's the final boss room, then I don't know what does.

I did a playthrough (sort of...) of this game. I'm a poor creditor, so I didn't remember your name at time of recording, but I've linked the video here for anyone who wants to play.

Good job on making this :3
Milennin

It's cool how every play-through is different. My first run of the night consisted of a Cleric. Have to say, this is the first RPG I've played where my main character was a pure Cleric, and I liked it.

I like how you handled everyone having four skills, one of which was a free-cast. And at least one (iirc) of the skills was a "mode." I enjoyed how you could toggle the mode and have benefits either way you decided to play. At first, the combat frustrated me because it felt slow, but then I realized what you were doing. I began taking my time and wearing down the enemies, and I had a blast after I figured out your system.

Also, if you don't mind me asking, what plugins were you using for the skill swap? You use the skill, enter a mode (status), and the skill swaps out with another. I've tried to do something like that before, but it just tosses the newly learned skill to the bottom of the player's skill list. How did you accomplish this?

Anyways, this was a lot of fun. I've been in kind of a slump lately, and this helped inspire me to get working on my own projects. Finally, the score card from my first play-through is there in the spoiler tag. It's a bit large even after I reduced it in size, but here ya go. Next time I'll likely fight more monsters. 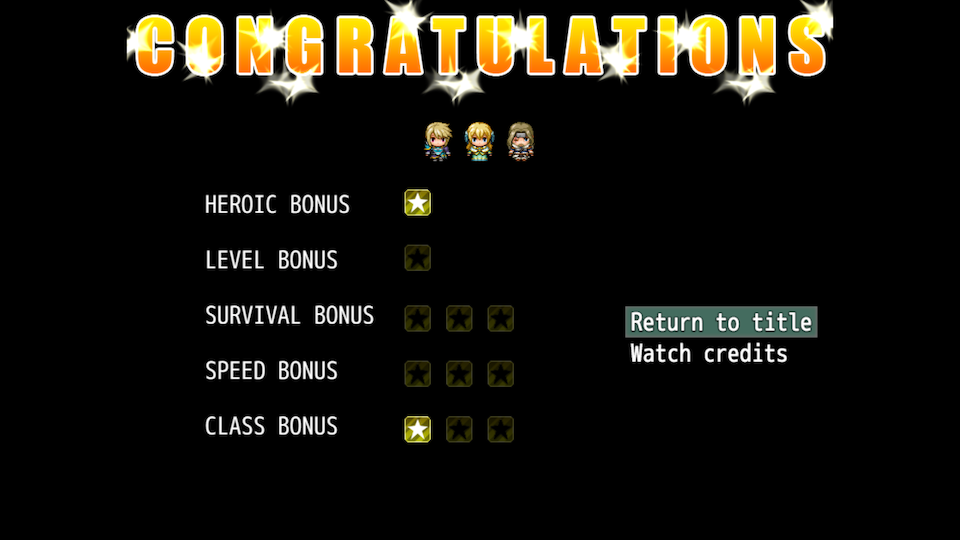 Not the greatest run I've had in a game, but I felt accomplished.
Milennin

Yes, you're not the first one to be frustrated with the combat when first playing. I noticed quite a few people experience that, but once they get through it and start getting a feel for it, they're liking it. It's pretty fascinating to see, lol.

author=Gredge109
Also, if you don't mind me asking, what plugins were you using for the skill swap? You use the skill, enter a mode (status), and the skill swaps out with another. I've tried to do something like that before, but it just tosses the newly learned skill to the bottom of the player's skill list. How did you accomplish this?

The game is open source, so you should be able to open the project in your RPG Maker MV program and go through everything if you wish.
For switching skills, no plugin is required, here's how it works:
-The primary skill, when used, puts a unique skill condition on the caster.
-The secondary skill, when used, removes the unique skill condition.
-A common event checks every turn whether or not a hero is inflicted with their unique skill condition. If yes, it removes the primary skill and adds the secondary version of the skill to the hero's list. If the hero is not inflicted with the condition, it removes the secondary skill and adds back the primary skill.
(The reason it doesn't use a common event upon skill use to switch between the two versions is because I want the skill to revert back to primary state when the hero dies or leaves/enters combat.)
As for keeping the switched out skill from showing up at the bottom, all you need to do is put the secondary version of the skill right below the primary version in the editor. Skill order is determined by how they're ordered in the editor, so skill #3 always appears above skill #8 in a player's skill list, if a hero knows both skills. So, if your primary skill is #3, you want the secondary version of the skill to be #4, that way, it'll always be in the same spot as the skill it replaced.

I hope that helps.
Darken