The Mage is Ready to Rock!

First Thoughts:
After reading the description for RTP, I was definitely curious to find out more about how Milennin pulled off the randomness concept and if the characters would be balanced. He succeeded in my mind. RTP is very well executed for the type of game that it is, and managed to throw in some extra surprises as well.

Story:
The story is pretty simple and straightforward. Your village is being attacked and people are being kidnapped and taken away. It is up to you to rescue them and defeat the big boss baddie! There isn't much more that I can say about the story, because the characters don't talk to each other and neither to the NPC's! Yet, the story practically tells itself as a narrative in your own head.

Game Play:
This game is meant to be played in "runs". You can't save the game and it is different each time you play. You begin as one of the nine playable classes and the action begins immediately after you leave your house, and the pace just escalates from there. 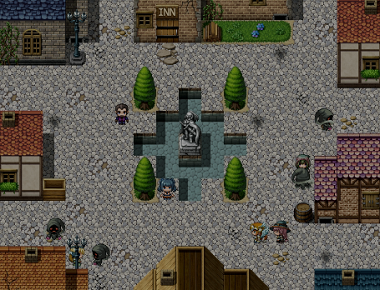 Your first task is to rescue two of the other 8 heroes that are fighting ghosts. Once you do, they will join your party. In my first run of the game, I started with the Paladin, and I rescued the first two people I found, who were the Mage and the Alchemist. It wasn't until sometime later that I figured out a very important lesson below.

PRO TIP: You can actually leave the screen and search for the hero companions you want on other screens, so it's good to get acquainted with what their sprites look like.

Once you save two heroes, the rest of them are lying on the ground getting the crap beat out of them. You CAN kill the ghosts abusing them, or you can skip and find the exit out of town. I chose to stop the madness and gain lots of experience, and you do level up quickly.

Things get interesting once you leave town. You are not allowed to go back to any previous screen. You can only pick a direction and go forward. No matter which way you go, you will always end up in the bosses dungeon, seeing your townspeople in cages, and ultimately ending in a final battle with one of four big bosses. 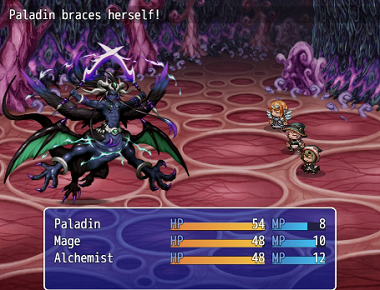 After defeating the boss, you have won. The prisoners are freed and you can safely return home knowing everyone is safe. You are then rated on your performance and if you managed to unlock all the achievements for your characters. I didn't. 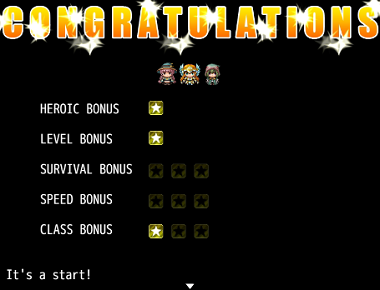 Battle System:
I wanted to make special mention of the battle system in RTP. While it uses the side view battler native to RPG Maker MV, Mileninn paid special attention to the skills given to each character class. First of all, using the regular attack command is futile, because the attacks are very weak. Instead, each character begins the game with four skills with varying AP costs. Some of these skills will change a characters "mode", for example, the Assassin that go into "Shadow Lurk" mode and recover health each round when it is activated. The Warrior can go into "Taunt" mode and let all enemies target him.

While it's very important to manage AP during battle, it's also equally important to monitor the enemy's status conditions. Enemies will charge up big attacks that will to massive damage to you, or they can become enraged after knocking their health down. Some of your skills can do double damage to the enemy if they are in a charged state, or make them lose their charge!

PRO TIP: Read the descriptions of every skill for your character classes. That will help you plan a better strategy than just spending the AP you have.

It's very nice when two characters can compliment each other. For example, your Assassin can use the "Slice" skill on an enemy and put it in a "bleeding" state, and then your Warlock can use the "BloodBath" skill to do massive damage to enemies in the bleeding state. Furthermore, if that enemy is still alive, the Assassin can then use the "Opportunist" skill to deal 50% more damage to a bleeding foe. 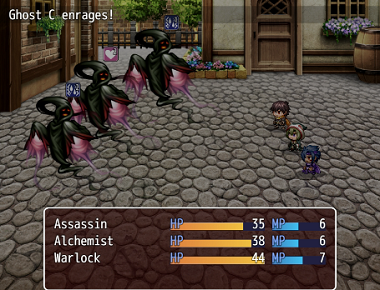 It's very hard to say what the best skill in the game is. So I'll mention my favorites:

1. The Warlocks "Minion" skill actually summons a Imp Minion to be the 4th party member. The Imp itself has many skills of his own, include being able to explode and do high damage to all enemies. The Imp can also be sacrificed to restore health back to the Warlock.

2. The Alchemist's "New Recipe" skill will swap the HP and AP of one of your characters, this is nice if you need AP in a pinch. Also the "Mad Science" skill is great at dealing with large crowds.

3. The Mage can go into a "Rock On" state, and will double his attack power for subsequent turns, making his "Tsunami" skill that much stronger.

Graphics:
As the name implies, the game contains about 99% RTP graphics, with some small adjustments here and there. I personally don't mind RTP graphics at all, and Milennin did a decent job mapping the villiage and the dungeons.

I appreciate small details, and during one of my runs when I started with the Warrior, it was snowing outside. You can slide on the ice at the town square fountain, which I thought was cool to add in. I also appreciate the caterpillar line up of your party. It just works well in this game.

Overall:
I was completely drawn in from the start of the game. Watching ghosts swoop in and kidnap people and then kicking the other heroes while they're down. People running in circles... it's chaotic and totally fun. I will definitely continue playing until I have earned all achievements and seen all the bosses. Also... I haven't yet played as the Berserker. So I'll have to see what he's like.

Close
04/12/2018 04:24 AM
We already talked in PM, so I'll keep it short here and just thank you again for the review. :D By the way, I like how your pro-tips are actually helpful, rather than just stating the obvious (I mean, you'd think they're obvious, but I have seen plenty of people -not- read skill texts...)
Pages: 1