To officially mark my return to the RMN after a year-long break in general (and a 16-month break from reviewing in particular) I decided to start off with some nice, simple game, and TungermanU’s Halloweeb, apparently made for the Halloween event just a couple months ago, seemed like a good choice. It was both short and unreviewed, so even if the worst came to pass, I would be done with it quickly and slightly chip away at the 1000+ unreviewed game count. Thankfully, I got much more than that.

The game uses TungermanU’s characteristic pencil-drawn art, and unlike some of his earlier works, it is fully black-and-white. The result is perfectly functional, though rarely impressive: only exceptions are a couple of portrait graphics you get for the key moments, as well as the nicely wide and irregular treetops at the school entrance, one of the handful of locations in the game. 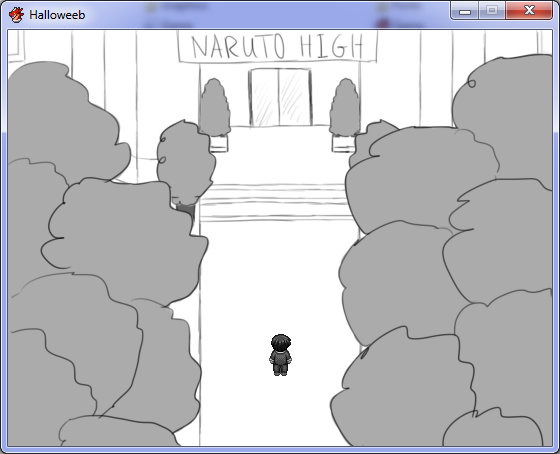 Which also happens to be the only location crucial for the ending choice.

Music and sound are used well enough, especially the early cheerful songs and the alarm clock sounds which begin the story. Footstep sounds are lacking though it’s supposedly a horror game, but hey, contest time limits! Some default RTP battle noises and graphics crop up later on (you’ll know them when you see them), and do not really fit that well, though that may just be due to the nature of the scene itself.

You walk and interact with things! Luckily, TungermanU didn’t skimp on the descriptions at all, and the writing you get all fits very well with the storyline, in a way that reminded me of Okiku, Star Apprentice’s in-jokes. Be it the protagonist bemoaning the mostly bare walls of his Calligraphy class, since none of them managed to produce enough works of sufficient quality to hang onto them, the inevitable manga-and-game-filled bookshelf in his room (along with a depressingly predictable p0rn stash under the bed), or the fourth-wall-breaking jokes about map design, it all congeals together quite well. As a nice bonus, it's notably free of typos: this might be the first time when I don't have any to point out. The only issue are the two instances where event scripting is not quite what it should’ve been: 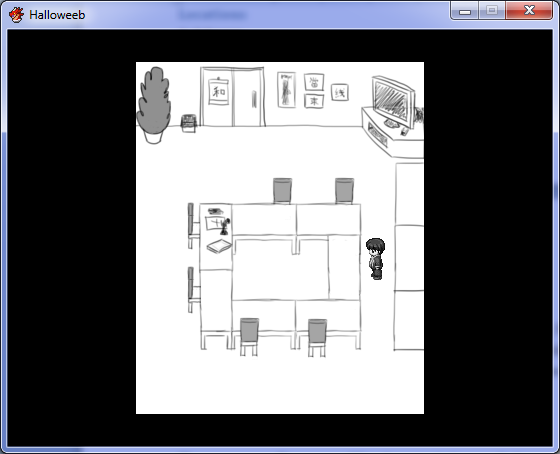 Interacting with these closets starts a short cutscene. There are 3-4 spots alongside them where this interaction can be initiated. The problem is that interacting with one does not disable the others, so you'll end up seeing it again, as well as, confusingly, upon re-entering the room. 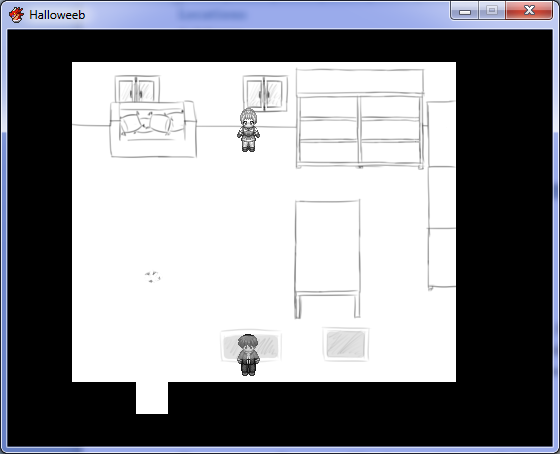 These are the apparently empty picture frames on the wall, and interacting with them is necessary for plot advancement. However, they honestly resembled either carpets or shadows from ceiling objects to me, so I didn't realise it's necessary to interact with them along the bottom wall, and spent a couple of minutes running around uselessly.

Then, of course, there’s the investigation part after the crime justifying the game’s horror label occurs. Interacting with every well-described active spot in the room turns them into rhetorical “items” in the inventory, which you then need to bring up in the correct order to make your case. Three attempts are given, and I ultimately used up two of them, so I guess the system is well-balanced. (Though I later discovered that using a "Quit" option ends up crashing the RGSS3 Player, so this probably ought to be fixed.)

Besides these evidence items, you also have a couple of actual physical items that are hidden in spots you normally wouldn’t consider interacting with. Finding them is essential for a good ending, which I got the first time. I kinda wish that ending included a battle, too: there’s already one in-story, but for some reason, it is conveyed through a wordy cutscene in a blatant violation of “show-not-tell”, and the result is rather ineffective.

The creator has said in the description that the game was made for weebs, by weebs, but I would dispute the description somewhat. The only anime I’ve ever seen was the original Evangelion, in what feels like an eternity ago, and Apple Seed, back in the year The Dark Knight came out. Thus, I wasn’t in touch with the cultural layer the game obviously draws on, beyond recognizing the relevant tropes from my time on, well, TVTropes, yet this was enough to follow the story just fine.

It begins with ordinary Japanese high school student Shinji Nakamura woken up by his bossy little sister Aya, as he’s utterly late again, a condition he’s so used to, he’s taken to sleeping in his uniform. Near the school entrance, he bumps into the school council president Kanata who’s also the resident thundere, concerned for his lateness while denying it’s anything beyond her duties to the council, etc. Entering the school immediately introduces us to Hina Moriamu, the bubbly Calligraphy club catgirl (well, those are fake, as evidenced by the ribbon, but still) who has magical powers, and a little later to Reiko Naganami, the solitary emotionless member of the Literature Club. As you can already tell, these are the anime archetypes established to the point of being either classic or unbearably stale, depending on who you ask. While they’re introduced with enough energy to move things along, you can hardly accuse them of being original. The crime that occurs soon after the introductions are out-of-the-way feels more weirdly out-of-place then genuinely shocking, and the investigation part afterwards is functional but hardly revelatory, partly because of the small pool of suspects, and partly because of the blatant clues.

If you get a good ending, though, this is immediately followed by first a style shift of sorts, and then a twist which explains all these narrative shortcomings. It’s ALMOST brilliant when it’s introduced, and would’ve likely been so with a stronger ending. Unfortunately, it’s ruminated on for a little too long, and thus the impact fades over the last cutscenes.

That last paragraph is where I wanted to leave my review at. All there really was to do is to play again, but intentionally avoiding the interaction with the aforementioned physical items, thus likely getting the typical bad ending. I wasn’t too interested in the prospect, but since the game is so short I felt kinda duty-bound to do it…and wasn’t disappointed at all! Even though it’s 95% similar to the other ending, the crucial difference here is that it’s BETTER, in a somewhat cliché, yet heartwarming and wholly meaningful way. Yes, instead of a good and bad ending, Halloweeb has a good and Best ending, and the latter is gotten by resisting the temptation of wish-fulfilment tokens, in a nice inversion of both the anime and videogame logic. 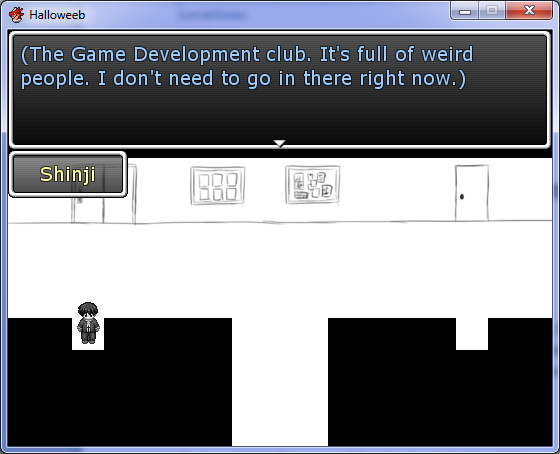 I wasn’t expecting much from this game, and the limited reception it got so far (3 posts on the game page at the time of wring) clearly shows same was true for other members of the website. I’m rather disappointed it has taken whole two months for such a contest game to get a proper review, but I guess this should show talent can unexpectedly emerge from anywhere. It was pretty great for what it was, and I certainly hope to see more such offbeat slice-of-life works from TungermanU in the future.

Close
01/05/2017 10:27 PM
Thanks for the review! This was a delightful read. There indeed has been little (though fairly positive) reception for the game so far, so I'm really glad to get a review and to hear that you enjoyed the game.

There is a bad ending actually, but the way I set it up I don't think anyone would get it on their first playthrough. (The ending conditions are explained on the Walkthrough page of this game profile.)

I would've loved to put a proper battle at the end too, the problem was less time limit and more the fact that I was a newb and didn't know how to handle the battle aspects of RPG Maker. Then again I never aimed high with this game to begin with, hence its humorous nature, so in the end I'm pretty happy with what I made. Thanks again for sharing your thoughts!
suzy_cheesedreams

@TungerManU I enjoyed this game too but had forgotten to say anything because originally I picked this for the secret santa event, as you know. I only got the 'good' ending so far. I'll see now if I can get the other two without looking at the walkthrough, haha.

Close
01/06/2017 02:25 PM
Now that I think of it, I might have made the conditions for the best ending a bit too cryptic, welp. I don't know if replaying the game to get all the endings would be worth it though, maybe I should've put a multiple choice after the credits or something idk. But thanks, Suzy, glad you enjoyed the game!
suzy_cheesedreams

Close
01/07/2017 07:41 AM
(And here I thought me leaving RMN for four months with no reviews since August, until the Ocean one recently, was bad enough. Wow, a year and sixteen months…)

Good review, though. It really is a bit of a shame that some games, like this one, have to wait so long in order to get a review despite it being made for a contest, but I suppose those are the breaks, sometimes. But it really is worth it when you finally do get that one review, at least, so at least you made TungerManU happy.

Also, TungerManU, don’t take this the wrong way, or anything like that - but I didn’t know you made games around here, lol! I guess you learn something new about someone here everyday, huh?
Pages: 1