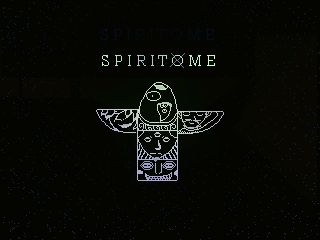 Ode to a Lost Masterpiece (Re-Review)


In my 2017 review for Spiritome, I expressed that it was pretty great and that I enjoyed it. While that's still the crux of my opinion on it, I felt I needed to do a re-review to express just how passionate I felt about it upon giving it a replay , and perhaps hope that it brings this forgotten masterpiece to a few more people's attention.

I've spent most of last year being oddly nostalgic for the past. I've graduated from high school and moved to a different country for university, so perhaps it has something to do with me missing home, or feeling out of place, or whatever other kind of psychological analysis you want to apply to me. It seems a lot of my absolute favorite media recently, whether games or movies, have been ones that evoke a certain nostalgic feeling. Some of these being things I'd never seen or played before, but have a specific atmosphere that reminisced of things I had.

One of my absolute favorite movies I've seen recently, Birdboy, is a movie I only discovered last year, but takes me back to being 13 and watching animated atmospheric horror shorts on youtube. I was in middle school at the time, and didn't really have anyone I could call a friend until two or three years later. I met a lot of nice people online, but that doesn't take away the solitude of being the loner kid who was just kind of there. Living in England now, I sometimes feel insecure that I'm in the same state. I've made some friends, and I have an amazing boyfriend who I makes me feel like I'm never alone when I'm with him, but part of still sometimes feels like I'm a boring loner at best, and an unwanted annoyance at worst.

And that's all pretty personal, but what I'm building up to here is why Spiritome resonated so strongly when I played it now. The difference between my playthrough in 2017 and 2022 is that now it feels much more personal. What was previously a pretty fun demo in 2017 is now a short, but very special experience. 
Now, I know this is something I've already played before, which already adds to the nostalgia factor, but going back to what I mentioned about Birdboy, the atmosphere of Spiritome similarly feels oddly reminiscent too. I love fantasy when it's more ambient and emotion driven rather than being about big spectacles like taking down an evil lord or a tyrannical army. While I can't speak for what was planned for Spiritome after where the demo ends, what's there feels like a much more small scale exploration of family and grief - just the thing I love. Beside that, it's filled to the brim with elements from some of my other favorite forms of media. Just to name a few examples, the mythology at times made me remember back to Brother Bear, with the folksy music oozing with the beauty of Firewatch or The Unfinished Swan.

Oh, speaking of, man I gotta talk about that sound design!

Spiritome's music in itself is an absolute journey. I know nearly half of it just comes from a stock music site, but the tracks chosen, mixed with the original compositions, make such a perfect continous storyline in music. You start off with the droning, surreal, mystical title theme, followed by quiet sounds of the ocean. You then walk your way up to town, and the folk music kicks in. If Spiritome was a less skillfully designed game, I imagine the town would have some generic upbeat happy music so that the darker parts that follow would feel more like a tonal shift. Admittedly, while the track is still pretty upbeat and cheerful, it still has that folksy undertone that keeps the tone cohesive throughout. And then as the game gets darker, that folksy undertone starts to get a lot more prevalent, with sadder or more chilled out guitar compositions. Even the sound effects are really effective, with a much more quiet and subtle feel to them compared to the RTP ones, for comparison. Everything just blends together really well and elevates the atmosphere beyond average.

Not to mention, the lovely graphics. Mocoon and Aracade are both clearly incredibly talented visual designers. Even with the way they've shifted refmap graphics into having a completely unique look and feel to them, and their whimsical tiny character sprites, the world just feels so uniquely Spiritome that there's nothing else quite like it despite how much it reminds me of other things. The mapping is quite nice too, bar one minor mapping issue in the protagonist's house, and the really good maps make up for some of the more subpar ones. Albeit, the furniture feels a little oversized at times. Do these people need a ladder to reach their sinks?


However, I can't say the demo is absolutely perfect. It has one noticable problem to it (besides the obvious of being unfinished) that doesn't hinder my enjoyment in the long run, but is worth mentioning for the sake of a fair review. It's pretty unpolished and rough around the edges. Cutscenes don't always play out in the smoothest way, with characters occasionally phasing in and out of existence. There's some non-game breaking, but still weird minor bugs throughout. In general, it feels a little amateurish at times in terms of programming and eventing, but that's worth looking over when the experience overall leaves a good taste in your mouth.

That being said, I think the devs had something special with Spiritome on their hands, which really makes me sad to say that there have basically been no news on it since its release in 2016. The devs seem to have completely vanished, and they don't link to any social media on their profiles to see if they're still active and doing other stuff. The only thing I could find was their email adresses in the game's readme file, but who knows if those accounts are still active. I did shoot them an email to mention how much I enjoyed the game and ask if they'd be interested in a quick chat about it, but it's unlikely they'll see it. Spiritome is, by all definitions of the word, abandoned, and probably not going to see a complete release any time soon, if ever.

But damn if that 15 minute demo enough isn't amazing. And I know I usually don't rate demos, but fuck it, I absolutely adored this. I give Spiritome four and a half fruit people out of five.