Hey, missed me?
It's been a year and a half and there hasn't been any activity regarding this little Game.

I decided to take a break from Game development and enjoy my time just hanging out in a fandom, messing around and what not. Well "take a break from Game development" wouldn't be quite right to say, considering I've finished an entire Game in the time I was gone.
Yeah, so I pulled a "disappear from the face of the Earth and return with a completely finished Game". Sadly, for the majority, it is a Game for the fandom I was in and it only concerns very specific people in the world. But hey, I learned a lot in the meantime!
(The Fandom and Game for said Fandom is Touhou btw. It was available on Gamejolt since late March and its just a passionate 8 hour shitpost lol: https://gamejolt.com/games/Reimu/483878 )

Anyway, now that I've gained considerable knowledge making a much (muchmuchmuch) smaller Project, I decided that this Game is complete and utter dogshite.
Excuse the vocabulary, but I've matured once more and decided that the way I wanted to tell my Story in Tod was just complete nonsense.

People who have read the previous blogs may be aware of the fact that I'm a indecisive Person and I keep changing things out of the blue, simply because I'm bad at blueprinting my Story.
Well, I'm happy to announce that that didn't change whatsoever. However, there was something that did change while I was gone. My attitude towards perfectionism.

While completely counterproductive, I decided to once again try my hands at this Project one last time. But this time around I will go with the same mindset that I've gone in for the Touhou Fangame: just have fun and let things be, damnit.
If I realize I am not having fun making my supposed "Dream Series" I will simply drop it like a hot piece of toast that burned my hands.

I do have good news though. Perhaps you'll be thrilled to hear that I'm making my own Battlers now. While I appreciate all of the assets I've stashed over the decade, I always felt it was less personal for me using these assets.
Since its a Game entirely about Monsters, the Battlers didn't speak anything to me and didn't stand out. So I decided to make my own... all 40 something of them.
It's been a lot of fun making them. Here's a sneak peak of a couple of them: 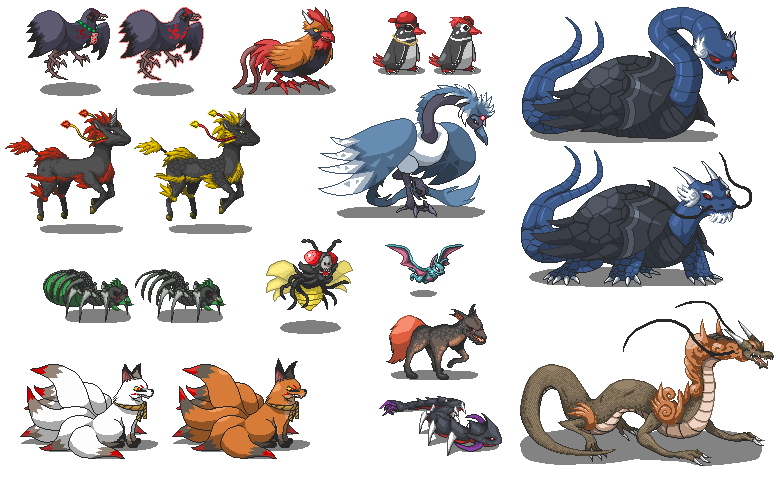 I'm not the best Pixelartist in the World, but for me it's way better if all the Battlers were made by me. And I'm actually already halfway through! (Which just took maybe 2 months, of which a whole month was maybe spent procrastinating.)
You can also see I'm going with some alternate designs as well and I'm having lots of fun designing Monsters. (Some designs are literally the same as the assets I've used previously. But hey, the art is at least mine)

On top of making new Battlers, I've also tweaked a little with the Battlesystem and made everything much smoother, much faster and I fixed some minor bugs along the way. The Endurance stat, for instance, now guards against Soul Attacks(Spirit in basic RM form) and Soul doesn't double as a Soul Defense stat.

There's still no luck regarding any composition, as I'm still too picky about the choice of music I want to go for. I do eyeball one composer at the moment though, but he's a very busy man and I must wait for an opportune moment (Like as if my now 6 year old game suddenly lost patience.)
But for now, have random junk from -redacted-.

Well, that was pretty much it. While I haven't shared much, it definitely felt like an entire different Journey that I've gone through with the Fangame. It made me realize that I actually am still passionate about making Video Games. I was just too focused on a single GRAND AS FUCK Project that would've literally taken me decades to finish, haven't I gone out of my way to take a break.
I need small time Jobs from time to time. Also I need to relax more, which I do.

Anyway, that's pretty much it. One last thing to address is that I played and finished SMT Nocturne. It made me realize something and it opened my goddamn eyes: my game isn't hard enough. 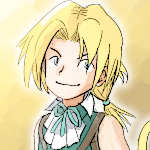