0 reviews
Milleniums have passed since Quaternaria violently erupted in chaos, fire and terror. The causant was the evil Myth, a horrific entity of great power, at first created to be the Guardian of Quaternaria by it's supreme god, Kalidon.

Kalidon had powerful enemies, other gods, once brothers, but blinded now with envy between them. The creation of Quaternaria and the Myth weakened Kalidon and forced him to go on a long sleep during which his enemies searched for ways to ruin his creation. Although they could not intervene by cosmic laws directly with the world they found a way: the Myth was tempted by these gods and submitted to their corruption, going rogue and spreading it's darkness. What once was a rich and prosperous world transformed into a vicious and evil kingdom, ruled by it's former Guardian with blood and lust. When Kalidon awakened, many years after, his anger was great, but instead of destroying the Myth he sealed him in a magical ice prison and his powers were suppressed in it. A father's love for a son is indestructible, so Kalidon forged a legendary weapon, the Black Sword, created to either redeem the Myth or be his final death. Kalidon was weakened again by the tremendous power needed to seal the Myth instead of erasing him, so he split the sword into fragments and gave them to the new Vigilants of Quaternaria in charge of their custody, with an empowered and unwavering loyalty to Kalidon, until the time to decide arrived. And so, Kalidon returned to his sleep.

And now, after thousands of years, signs of an ancient and forgotten evil have started to appear, once again. Few know of the terrible events that devastated Quaternaria, and Kalidon and the Myth are, in the present, only legends. But shadows and darkness spread slowly across the world, from far beyond the Transformation Line, and Quaternaria is in need of heroes to defend it against the possible return of the Myth and to be the heralds of it's final judgement. The members of this epic group still don't know that they will change history, for good or for bad, once again.

And the only way to do this: find the Black Sword before the enemy does.


The Black Sword Chronicles is an episodic RPG fantasy game in early production.

Now, it has been more than a month since I updated the blog, so it is time to keep you guys informed of progress.

I am still pretty focused on mapping right now, I have been working in lots of instances as you may have seen in the images I have been posting pretty constantly, including today. You can take a look if you like in the corresponding section.

I can already tell you about almost all of the dungeons the first episode will have, and when I say dungeons I mean bigger instances, there will also be some caves and others. These dungeons will be, by name and order of appearance:

I'll tell you more about them in the coming weeks, meanwhile check the image gallery to have a first look at parts of them.

Apart from mapping I have almost finished character design. This aspect will be covered in a future section I will include in this page introducing the 4 main characters the player will control: Edgar, Armand, Vidar and Ley. The section will also cover other NPCs and antagonists, such as the Demon Commander Macfleus or the Myth.

- I am also working on monster designs and combat scripts, which are pretty much Yanfly's credit. He has some very very nice codes which I am experimenting on. Here is a new pic of a boss, the Nightmare: 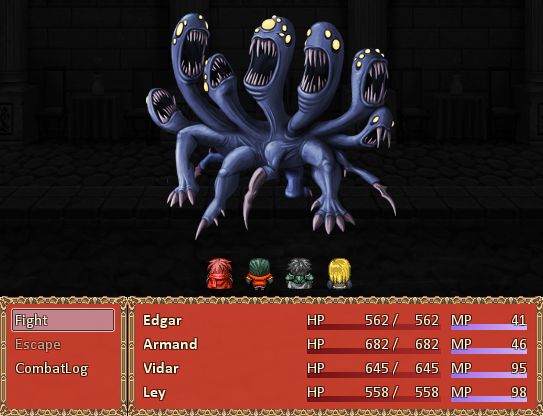 - World map ingame is also another thing I am working on, but it's still a bit buggy in terms of player positioning. Much work is still to be done, like adding some legends, but here is a first look: 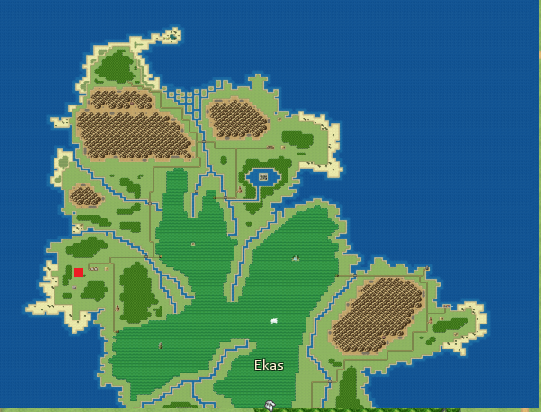 - Menus are also some of my concerns at the moment, I am using Blackmorning's scripts which are cool for the equipment section. A first look and more to come in the future: 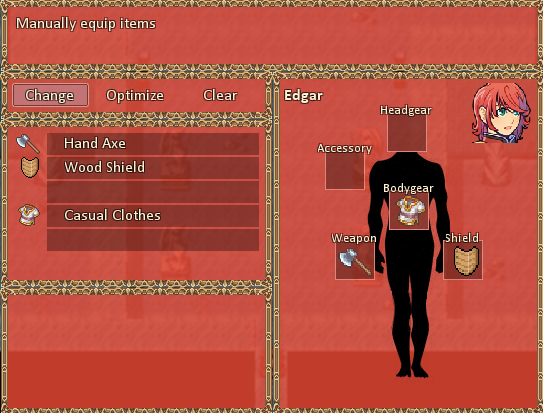 - Finally, a demo is something I plan on releasing this year, but I still have no date, sorry.

And for now that's it. More stuff coming up in the next weeks, stay tuned, bye bye!!! ;)
A first look at part of the city of Adalkor

Close
11/17/2016 02:18 AM
Those screenshots look pretty snazzy, and I'm a sucker for this type of storyline. You shall now receive +1 to your subscriber stat, increasing your overall attack power.
SPM