Fleshforward is the first game made by italian indie developer Linked Room and mixes stealth, RPG and action elements. The game is inspired from horror classics like Resident Evil/Biohazard and Silent Hill, but it will bring the player to confront a very interesting story with a lot of plot twists. Two characters with different traits and abilites will face a real hell on earth, in a modern setting. A new action combat system will offer dangerous and quick fights, but brute force will not make a long way

Story
Life in New Wells has been destroyed by a catastrophic event: something transformed the citizens into violent monsters without control, fierce cannibals devouring each other. Along with a destroyed society, New Wells is now more similar to Hell itself where human life has no more value. Two people are still alive thanks to lucky circumstances and personal skills: Seph Garrett and Hellen Bates are united and divided at the same time. He is an undercover cop, she is a well-known criminal: they are natural enemies, but now they need to cooperate to save their lives. The city is now a deadly labyrinth and death is around the corner.

Gameplay
ACTION & STEALTH
Fleshforward will feature an action/based combat system focused on firearms: no turn based combat then, but pure action. But be careful: having a "shooter" approach is going to be an error: enemies are many and you will find yourself outnumbered. A stealth approach is the best choice sometimes.

TWO CHARACTERS, ONE ADVENTURE
Seph and Hellen, the two main characters, will share a game world free to explore with a bit of caution: danger will be everytime behind the corner. Carefully written dialogues, an interesting story and puzzles will put your brain to work.

RPG MAKER ENHANCED
Fleshforward will go over RPG Maker classic limits to offer a unique gaming experience, something new and at the same time inspired to classics of the survival horror genre. Prepare yourself for a big story full of easter eggs. 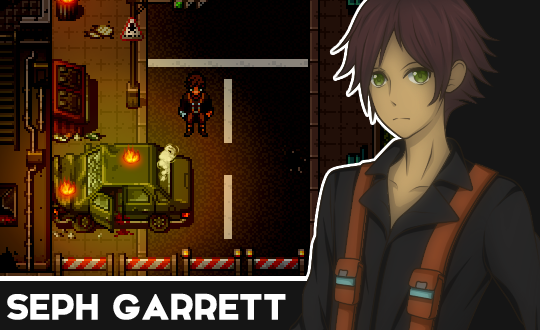 Seph Garrett
28 years old cop, is well known for his passion for work: physically prepared, brave and with strong will gained a good reputation for dangerous missions. Now the city is destroyed and he is starting to lose control: no one to help, no colleagues at his side, only a terrible mass of monsters driven with a terrible blood lust. Well armed and trained, he will use his knowledge trying to survive. 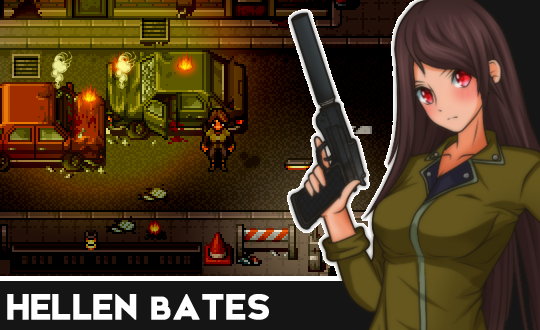 Hellen Bates
22 years old: after a difficult life spent at the bottom of society, she met some criminals who hired her. Very skilled into moving unnoticed and dexterous thefts, she became a strong willed girl with a lot of self-confidence. But now everything is messed up, and her skill are not useful anymore: nothing to steal, no people to harass, only monsters looking for her flesh. She always tried to survive counting on her own abilites, but now she spend her days hiding like a mouse in a hole.

This looks great! I love the character sprites!
LinkedRooms

Very soon we will release a short demo...
LinkedRooms 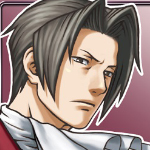 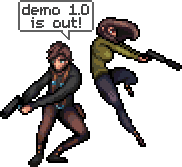 author=Make_it_MagiK
This looks very interesting!!! The mapping looks amazing and... It's in italian!!! Do you already have an italian version out?


Thanks :D
The project will be released in several languages ​​as soon as possible! ;)
NoBody13

Close
03/31/2017 02:14 PM
Your Game Intruction up there is very difficult to read.
Can you please change it.
LinkedRooms

author=LinkedRooms
Unfortunately, the page does not support the Youtube tag, but now we have corrected the topic ;)

Oh yeah, now looks normal!! I even forgot what game this was because of the messy page, but now I remember! I started to play it and seems really interesting and cool :) Good luck with it, dude.

Close
04/03/2017 09:08 AM
The game page looks very cool now! I really like the characters' graphic! Really well drawn and their bios is also well written! This game is very interesting! Can't wait to play it! Good luck!
Stoic

Unfortunately my demo experience ended at the first enemy. I wasn't able to save and there were no checkpoints and didn't feel like running through the starting area again. The combat seemed clumsy from the few seconds I engaged with it. It seems like there should be a way to go into a strafe state where you aim forward and are able to move left and right and back but can't run. This would make shooting enemies walking towards you a lot more manageable.
InfectionFiles

NEW FEATURES AND IMPROVEMENTS
- No more wait time during dialogues
- Zombies now stop and go back when hit
- New keys setting: QWER, A and C (Z/X default for menu and interaction)
- Load and Exit selection in Game Over screen
- Our game is now sponsored by Indiexpo.net
- Use and Drop command in the menu are improved
- Exit command in the menu now requires additional confirmation
- Zombies are now a bit easier to kill
- The player is more resistant to damage
- New sound effects when hit by zombies
- New sound effect in the main title menu
- Lag issues solved, source code polished
- Intro credits are now quicker
- Menu texts improved
- Melee combat moves added, used with "shoot" key while unarmed
- New choices YES/NO in the menu while using a command
- New sounds for death events
- Sound effect added when stamina reach zero
- Better UI for the menu
- Items added to make the experience a little more easy
- Guide for playing on Mac!
https://www.visiontechcamps.com/blog/knowledgebase/installing-games-made-with-rpg-maker-vx-ace-on-mac-os-x/
LinkedRooms