Good evening! Are you ready for a new horror story?
Today I wanna tell you about a game made with RPG Maker VX Ace by Zmakesgames in 2016. This is a dark visual novel/puzzle adventure called Immortal, that is about the darker side of immortality and the consequences of it. Since this is a horror story, expect themes like death and suicide, anyway nothing is visually explicit, so you are warned but do not worry too much I guess!

The game starts with Nicholas, a 22 years old guy that just refused a coworked invitation to go out and decided to head home. Anyway he boards a bus that breaks down near a large manor, and he finds himself there alone with the bus driver Darcy, and another passenger, Mona the writer.
Clearly they decided to head to the manor and search for help, after all what can go wrong? Well, you will see what by playing this game! 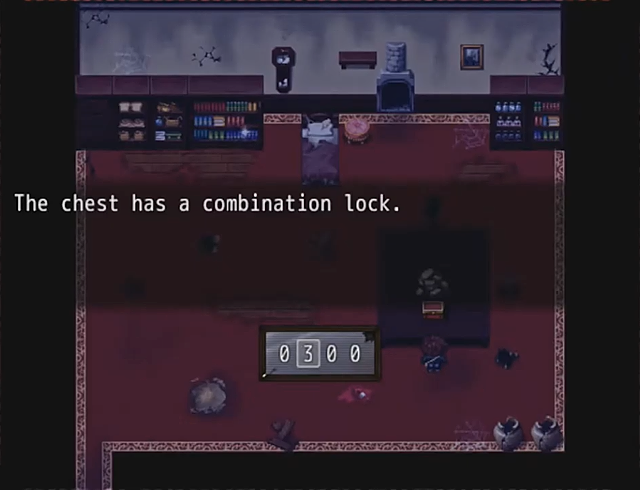 Yes, here we need to find the combination of the lock, of course!

So we play as Nicholas, a shy and not very social young man that find himself stranded here with two strangers. They're afraid of the wolves so they decided to stay inside the large mansion despite some not so reassuring particulars like the presence of bones! But why no one uses a phone or the bus company does not come looking for them? Well believe it or not there is an explanation for some of these logical questions.

Another detail about the storyline is that the game claims that the story us told from multiple perspectives and the player's choices will impact how the story progresses and who will survive, but while the first part is true, the second is only partially correct. There are in fact three different instances in which we may decide the fate of someone, and this can lead to the death of someone in case of a wrong choice, or to a happier situations if the choice was correct, and in the end this will lead to on of the different ending, from the worst if we choose poorly each time, to better epilogues.
There is no other choice, not even in the dialogues, so do not expect much interactivity here. Not that this is a bad thing, the game kept improving as I played, for example finding a particular journal lead to a long flashback cutscene that was really well made and interesting. The story is pretty great and improves a lot after a slow beginning, characters are well written and interesting. 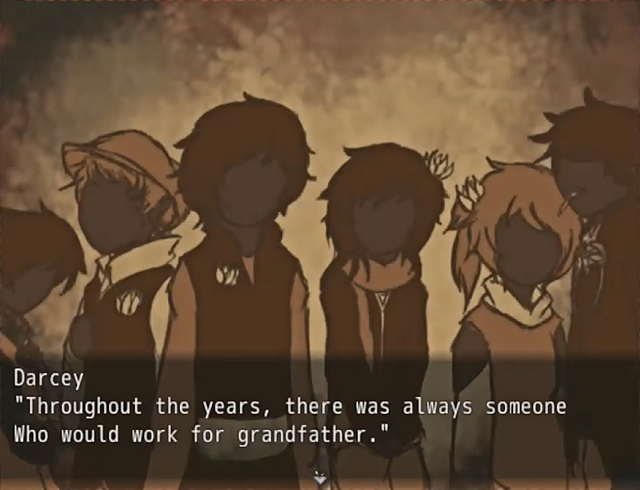 Excellent cutscenes? Yes, there are those too!

The gamplay is classic Rpgmaker horror explorations game: we have to go around the various rooms of the mansion, look for items, interact with various things, look for hints and complete some simple tasks. Despite being a party-based horror there is no use for that menu, since there is no combat and not even chase scenes, that are quite frequent in rpgmaker horror games. Anyway there is a particular timed section that can affect the plot, but nothing else. By the way, as already mentioned before, things really improve after the first half of the game, not just for the storyline but also concerning gameplay and atmosphere!

Now, the graphics! The maps are for the most part competently made, most of these are just the rooms of the mansion (some are a bit big and empty) but there are also some flashbacks set in other locations. I liked them also because there isn't an excessive use of fog or shadows like in other horror games, on the contrary it's all kept simple but still effective and immersive. Most of the assets of the maps are Rtps but there are also many edits and custom graphics like original busts that aren't static but have some subtle movement and they really add to the atmosphere.
This game included also many original cutscenes that are excellent both from a visual style and also how these are implemented and this really made me read and watch with interest and curiosity.

Sounds and music by Kai_Engel are also an excellent choice, and I found them particularly fitting, especially for the tense situation where it's matter of life or death. It's also worth mentioning that the dafault menu sounds are replaced by piano notes! Nice choice. Anyway the piano is an instrument that will accompany the player during all this adventure. 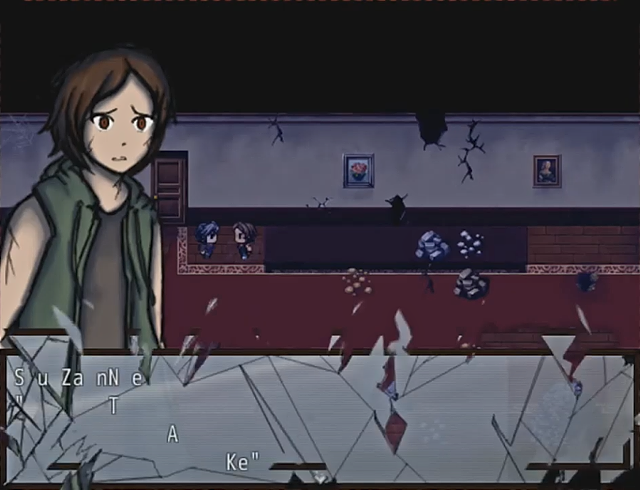 Final Verdict
Despite a so-so beginning, Immortal is a great horror rpgmaker game, not particularly original or different, but really competently made and with some excellent original visuals and great cutscenes.
This is a must play for those players that like the psychological-horror genre, and those who wants to enjoy a great story, so do not be discuraged by the slow and not so scary beginning, because it really gets better and better.
Like Cardiophobia (that I reviewed in the past), this is a horror game that I can recommend with no doubts at all, the only reason you do not have to play this is just if you want to play a different kind of game (so it's just your fault!). But if you're fond of the genre, you will find a carefully made game.