Aufie's Quest is billed as 'a humour oriented game,' which is usually a sure sign of trouble as humour is notoriously subjective, but as I've not played a genuinely funny game for a while, or at the very least not one that was purposefully so, I thought I'd give it a chance. I should have listened to that small still voice that told me it wasn't going to work out too well. 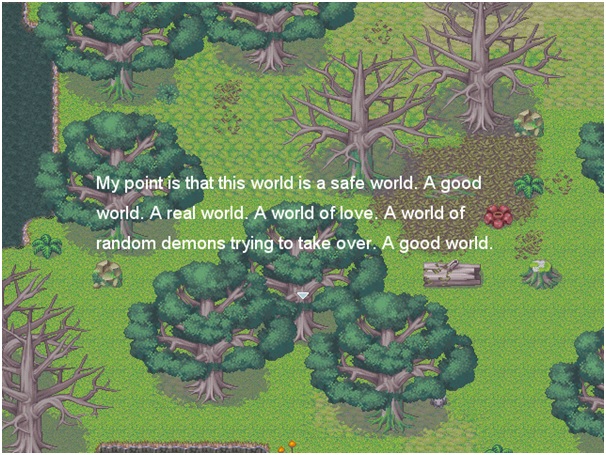 Interesting definition of good there.

So this short somewhat clichéd game starts with our heroine, the Aufie of the title, waking up from a night out on the town with a killer hangover, but still in full possession of her memories (so not as clichéd as it could be) and a strange man in her room, but that isn't anything to worry about it's just the game designer obliterating the fourth wall from the get-go by offering game-playing tips whether you want them or not. So after being told to open every cupboard and that it would probably be a good idea to hit things in battle, you exit your room only to be attacked by your door which mysteriously appears to have been transmogrified into a demon, after wiping the floor with it (the demon, not your door), you then get attacked by a house-plant, it seems that as part of their nefarious plan to take over the world the random demons also become random objects. That or this particular house-plant has heard about Liberty railing against their existence and has decided to get its own back. 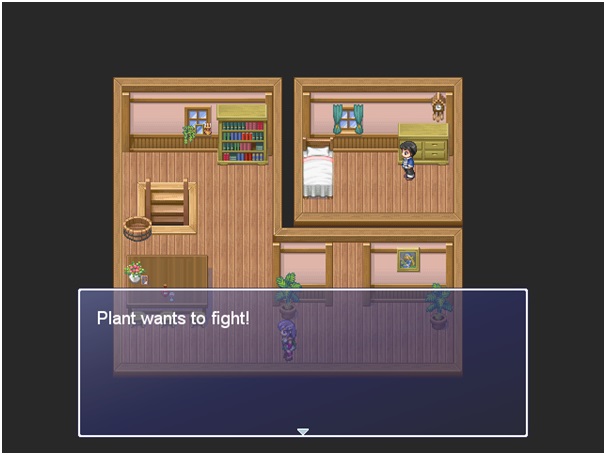 Still after you manage to escape from the camouflage demons masquerading as common household items you make downstairs to be served breakfast by your brow-beaten boyfriend Li (why couldn't he be called Bob? That would have made for some sweet alliteration). So after breakfast and another random fight with the furnishings you pop outside to find more hidden demons, though these ones at least drop some nice items before the fight, and it is revealed that there is indeed an evil plot afoot to change everything into demons and that the fiend behind it all is Lord Necklortak. Also he's made it start raining, so really there is little our heroes can do but seek him out and thwart his evil plans, otherwise there will never be another sunny day, and also, demons are bad, so there's that too.

I'd say something about the battle system, except there isn't anything much to say, it's the XP default, front view, turn based with no customisation of any kind, so you know exactly what you are getting. Whilst we're on the default, the graphics also fall into that category, and unfortunately there are a lot of passage issues with a vast number of plants, furniture, rocks and other items being passable when they really shouldn't be. The music too is also the default, and seems to stick to two or three different themes most of them at the comical end of the scale, even when the game scenes don't match, which is a little off-putting. It's the musical equivalent of a laugh track and works with about as much success. 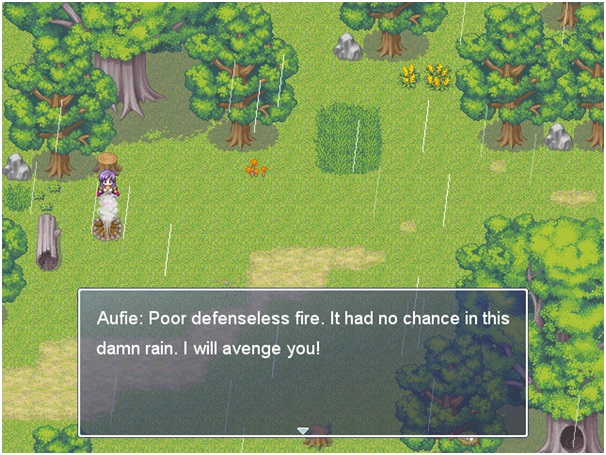 Well as quest reasons go, it's not the worst I've ever seen.

So onwards our expanding party of do-gooders trudge along, picking up a cleric in the one building town, and encountering, though not yet recruiting a mage in the forest, until we come to the castle of the evil lord guarded by a vampire named Bob...seriously where was he earlier when I needed him? The vampire peppers his insulting conversation with crass comments, mostly centred on sexual proclivities and perversions and the prodigious use of slang terms for genitalia of both sexes, and the party respond in kind. I think this is what passes for humour for the developer, or at least this appears to be the mainstay of the type of humour portrayed in the game. In fact the only character that has shown even a modicum of finesse in their conversation is a melodramatic squirrel with a side quest, which you won't be able to complete until you recruit the mage, as it appears it takes four to tango in this particular game.

So with the threat of impending death and your still warm corpses slated for future entertainment for the necrophiliac Necklortak our party enters the castle and comes face to face with random enemy encounters, well at least the furniture has stopped attacking you. I suppose that's less necessary inside the actual headquarters of the fiend. There are a few traps scattered around, mostly of the spike variety, but they're on a predictable cycle so in the few places you have to cross them the difficulty level is minimal. Oh and I spoke too soon about the random normally inanimate things attacking you, that happens too.

Along the way our mysterious mage from the forest appears again and this time stays with the party, and you run across a chest you cannot open, unless you bought a certain item from the shop/inn/bar/adventurer's guild (I did say it was a one building town). This is the time to back out of the castle and go and do a side quest or two. The subject matter in these quests ranges from the absurd to the depressing and there is not a lot of reasoning behind most of it, or at least not a lot from an unaffiliated player's point of view. The game-page does make a note of the fact this game was made for a friend but given the fact it was released for perusal to a wider audience the points made shouldn't be reliant on the personal knowledge of a single recipient.

After a few more puzzles are completed we enter the lair of the beast and the obligatory mad villain monologue, actually three mad villain monologues then you get to defeat the evil on the throne, and the evil behind the throne and are faced with a moral choice, if you've managed to complete the side quests before entering the final stage of the castle you'll be able to save everyone, if not, well you won't. It's that simple and binary. 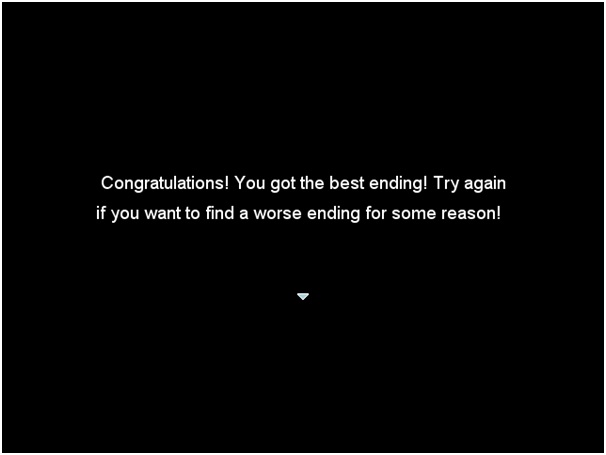 Can't think of a reason, myself.

In the end the bad guy gets his comeuppance, probably, and a happy ending of sorts is achieved, well at least you got the rain to stop, so that quest objective was achieved if nothing else. I think in the end Aufie's Quest probably should have stayed as a present for Aufie rather than a game for others to play. There is too much unexplained and too many scenes that probably meant a great deal to the developer and his friend, but that have little or no impact on anyone else, other than making you feel like you inadvertently walked in on a significant moment between two friends.