Heroine's Quest: The Herald of Ragnarok 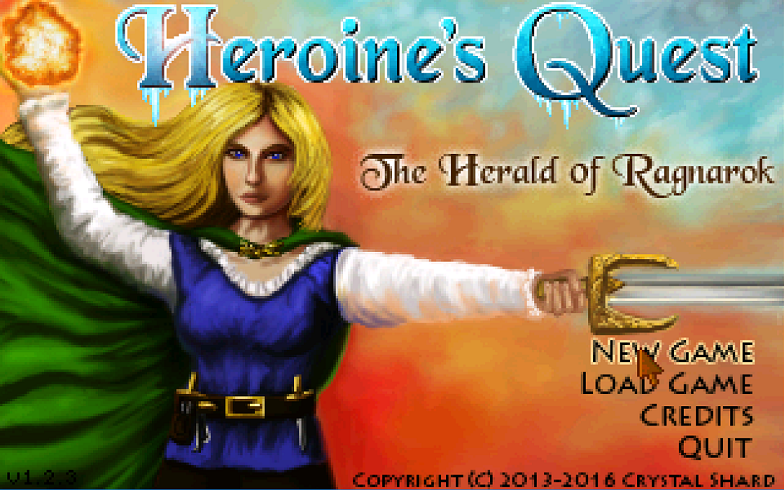 I feel like this lady isn't dressed nearly warm enough for Fimbulvetr.


Story: You play as the Heroine, either a warrior, sorceress, or rogue. Buried in an avalanche, you are rescued by people so hospitable that they will not let you freeze to death, but are more than happy to let you starve to death. In fact, it's only after you've gone out and gotten enough food that you don't need anymore help that the Jarl will give you a few rations, even though they can't really afford to. You learn in a vision from the Norns that a Frost Giant seeks to release Loki Laufeyson from his imprisonment and bring about Ragnarok. It is your mission to stop the Frost Giant's pet troll(s?) from getting him what he needs to release the trickster god. Your ultimate goal is to destroy the Frost Giant, himself, because asking a woman that you were happy to let starve to death to save the world seems perfectly logical. 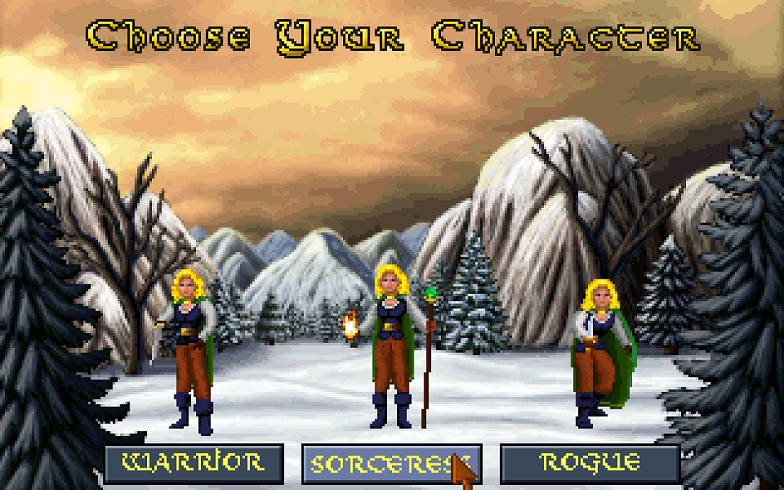 "You must choose, but choose wisely."


Writing: Grammatically, the writing is excellent. Likewise, the story is amazing. The characterizations leave a bit to be desired, though. The villains are a joy to read, even though they're a bit reminiscent of Skeletor and his minions. The NPCs the main character interacts with, however, are a bit wooden, with only a few exceptions. Hervor is practically emotionless. She will teach you basic combat controls, but anything else you ask her, her answer will basically be equivalent of "Figure it out, yourself." Her husband, Volund, is absurdly formal. 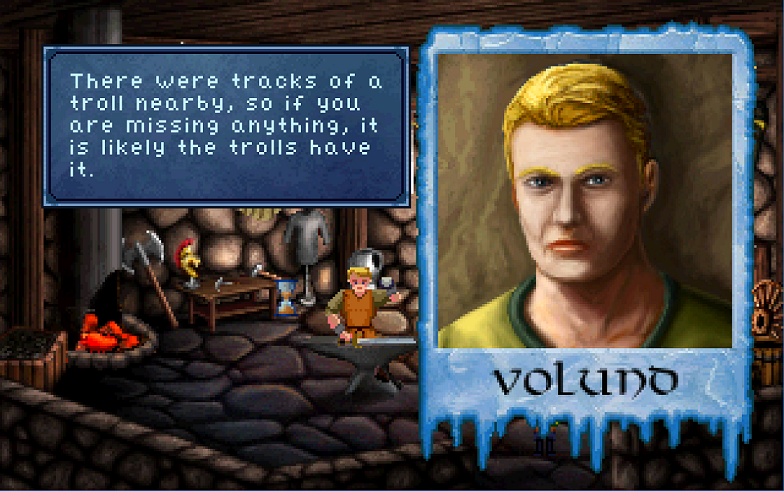 "I'm not angry about the trolls. I just look perpetually pissed off."


Overall, the story is well worth it. It's just a shame that the characters are only there to give exposition and quests, but with only a few exceptions, have all of the personality of a mud fence. One such exception is the wizard Aurvandrel, who has a penchant for repetition. 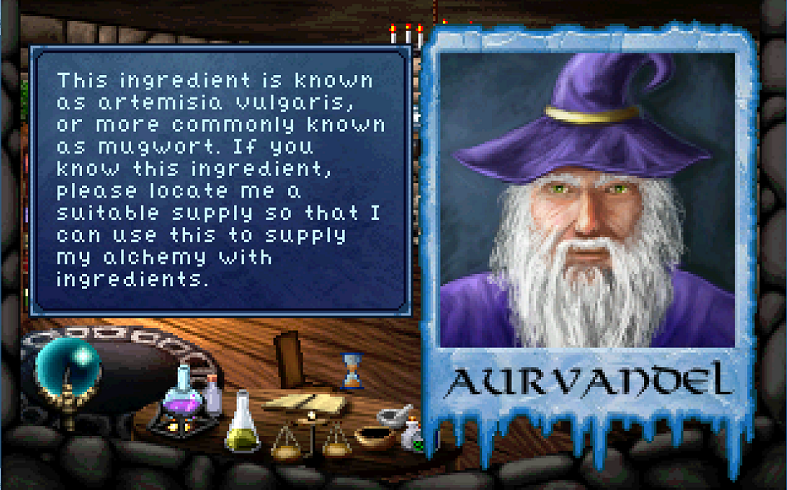 Can you believe his audition for Team Rocket was rejected?


Gameplay: The standout of this game, the gameplay is a hybrid of a point and click game and an RPG. Combat takes place in contained random encounters. Rather than turn based, this is a very rudimentary action RPG. The warrior starts with three different attacks, block, parry, dodge left or right, and duck. The sorceress starts with a fire spell and a staff attack, parrying, but no shielding. I did not try the rogue. You unlock other abilities as you progress through the game. The game can be played on keyboard or on mouse. Use the right mouse button to cycle through your command options. Move the pointer up to the top to open the control menu. Otherwise, everything is also available via keyboard. 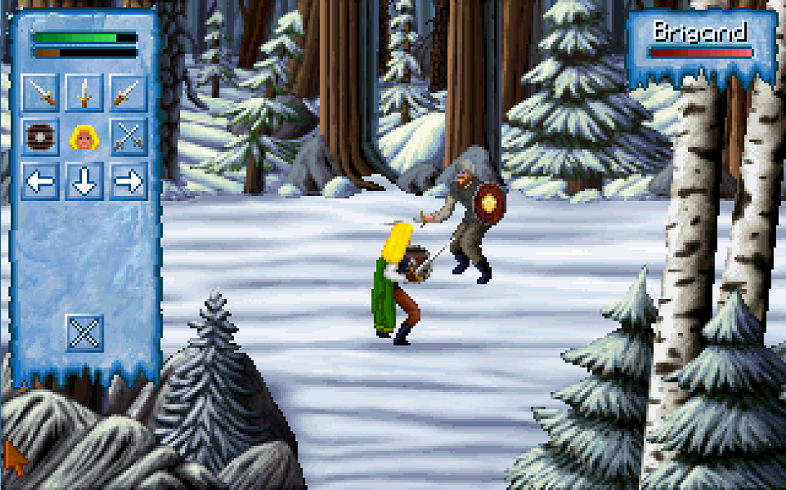 "I fart in your general direction!"


The point and click elements directly recall games like King's Quest. Unlike point and click games of the 80s and 90s, the puzzles in this game actually make sense. For example, using the spear to kill the boar so that you can get food. The solutions aren't abstract or absurd. Your health system is a combination of HP, stamina, and status influenced by environment. Hunger and cold will directly impact stamina, and if stamina hits zero, you'll start to lose HP. It's a very well thought out system and surprisingly well rounded for this type of game. People who aren't familiar with games like King's Quest or Space Quest might find the movement and action style a bit slow and protracted. The type of gameplay you find in games of this type are definitely an acquired taste, I won't deny it, but I will contend that the slow movement speed improves the overall appearance of the game, and makes combat more strategic.

Graphics: Simply gorgeous. The only, only, only nitpick I have is that proportions on character's bodies are a bit odd here and there. You can see the issue in the strange torso proportions in the title screen, or the odd limb shapes on the combat screen above. A stronger understanding of human anatomy would have been appreciated, but regardless, even the characters are beautifully rendered. The backgrounds on every pixel of this game are absolutely amazing. You may have noticed I was taking screencap after screencap. That's because for all of my complaints, the art is simply amazing, and I couldn't decide what sights I liked best. 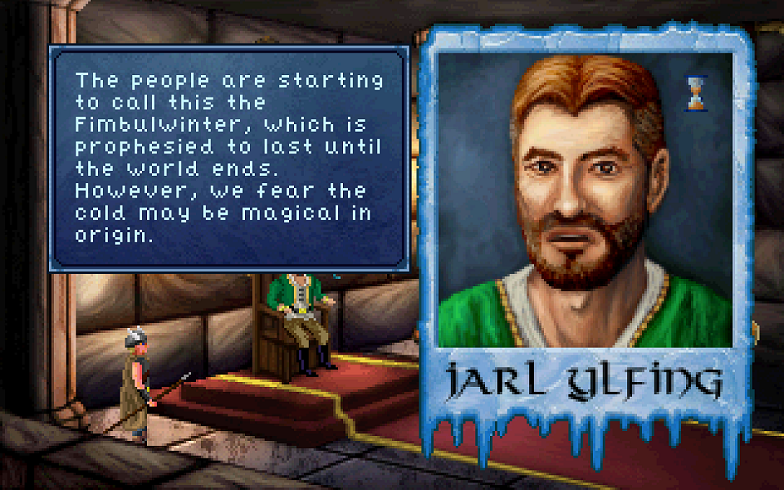 So, does this mean that after eight seasons, winter has finally come?


Sound: Fully scored, amazing sound effects...and fully voiced. The musical score is epic and perfect for a story about stopping the rise of the trickster god Loki. Voice acting is...okay. Hervor often sounds more like a robot AI talking. Regardless, the voice acting, while not great, isn't Resident Evil bad. It's really nice to hear, and while it's clear that everyone's reading their lines off a script, they mostly put effort into sounding like real characters in this world. I will also note that this is the first time I've actually had to put effort into writing the sound section of one of my reviews on RMN, so voice acting is very welcome. The most engaging character I encountered on my short sample play is the innkeeper in the first town, whose name I can't remember for the life of me. Heime, Hervor's and Volund's son, comes in a close second for engaging and likable characters with engaging and likable acting.

Conclusion: It's as amazing as it looks, but it's not as perfect as it might seem. This is a strong title, with love baked into its creation. It is a must play, albeit flawed.