Sacred Reviews: The Little Music Box and the Daemon

I decided to do this review a few days ago in order to offer up a bit of a counterpoint to painotm's review. After all, you don't need to be some kind of "RPG Super Wizard God" in order to beat the game's first dungeon, much less the game as whole.

"The Little Music Box and the Daemon" is a sort RPG created by diaeitsch that clocks in at around 3 hours or so. Though, I suppose my estimation might be a little bit over the top considering how much time I was willing to dedicate to grinding for items before the final boss battle. So, I'd take my estimate with a grain of salt.

Story
Plot Summary
You play as a hermit on a mission to save a princess in distress. Of course, things quickly turn for the worse when you learn her captor plans on taking over the world with the power of an ancient daemon. As a result, you'll need to team up with Princess Sunny in order to save the world.

Comedy/Tone
The game's choice in comedy is a mixture of oddly named enemies, surreal situations, and pointing out just how cliche the game's plot really is. So much so, that you can't help but admire that last category to a certain extent. On the other hand, the game's surreal situations are so bizarre and out of character for a game like this that it just utterly undermines the tone the game is trying to go for in other scenes. After all, if this is meant to be a surreal comedy game than why does the game include onscreen deaths for two of the playable characters? After all, the audience usually isn't meant to laugh when one of the heroes companions is mortally wounded. This isn't to say that death can't be funny, but this isn't "Chupacabra vs. The Alamo" where a character is casually killed off by bleeding to death after having his dick is bitten off.

Spelling & Grammar Errors
The game does contain a few notable spelling and grammar errors. The most notable being when the game repeatedly refers to Crescent being on a mission to "safe" Sunny from the count rather than save. Albeit, this may also be a joke considering the guards have to tell the princess that's its pronounced count not cunt.

Gameplay
Basics
On the basic level "The Little Music Box and the Daemon" is a very standard turn-based RPG with touch encounters. So standard and basic that I'm finding it difficult to come up with a lot to say about it. After all, the systems on display here have been used in dozens of other RPG Maker games over the years. Though, I suppose there is one elephant in the room that needs addressing. 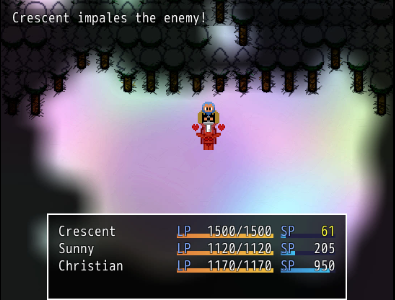 And, it's not this image of Crescent plowing his sword as deeply as he can down a Succubus's throat.

Combat Balance
While the game's balance issues aren't as god awful as pianotm would lead you to believe.

author=pianotm
There are game settings that we are all familiar with; Easy, Normal, Hard, Superhard, Nightmare, and Christ,-dude,-would-you-please-balance-your-shit? Guess which one this game is.

There's no denying that the combat balance in this game is terrible. This is because your ability to win is heavily reliant on you being outfitted with the best gear you can buy at any given point in the game. If you are, then you can readily decimate your enemies in order to listen to the lamentations of their women. If you aren't up to date on your equipment than you'll be the one that gets utterly crushed and your ashes scattered to the four corners by the wind.

Outside of needing to keep up on your equipment. You also need to be willing to spam your skills as well as recovery items in order to stay a step or two ahead of your enemies. If you do both of these things than you'll find this game to be rather easy.

In fact, the only reason pianotm struggled with this game is because he wasn't aware you can use the inn in the starting town multiple times. And since you can rest at the inn for a meager 30 gold pieces. You can freely spam Jack's special skills on the early enemies in order to earn the levels and money you'll need to properly outfit Crescent.

On the plus side the game features entirely custom assets that have the appearance of being hand drawn. This really gives the game a unique flavor that makes it stand out from the crowd. In fact, the only real negative I can throw at this game when it comes to this aspect is that a few of the houses in the final town look a little off due to them not being symmetrical.

Bug
The game does contain one minor bug. During a cut scene, Princess Sunny is supposed to learn a skill meant to block the final boss's ultimate technique, but she'll also learn this ability if you get her up to the game's level cap of 15. And considering you'll probably want to stock up on a few full HP and SP recovery items before taking on the final boss. You'll probably experience this bug for yourself if you try to beat this game. Apparently this little bug is a leftover from when the developer was play testing the game in order to find bugs.

"The Little Music Box and the Daemon" is a game that seems to be torn between trying to be a comedy and an old school RPG experience. Sadly, this blending of tones really doesn't sit that well for me. Add in some combat that teeters between easy to ball bustingly hard at the drop of a hat and your left with a game that really doesn't work for me. On the other hand, comedy is highly subjective. So much so, that I really don't know if I want to recommend for or against this game. After all, I'm sure their is an audience for this game's offbeat humor somewhere over the rainbow.