A chaotic mess or a clever parody? Why not both or neither of them?

Hm
This is a game that is VERY difficult to review because it's really a strange mess, but let's start from the beginning:

Jill Valentine and... Tom (WHO is this Tom? I do not recall any Tom from the Resident Evil series, but ok!) are escaping the Umbrella on a train, and have to run away and find salvations, fighting zombies, ninjas, demons and russian soldiers, visiting laboratories and sex clubs, meeting various celebrities and solving some puzzles.
Oh and do not forget the haunting presence of Matt LeBlanc... 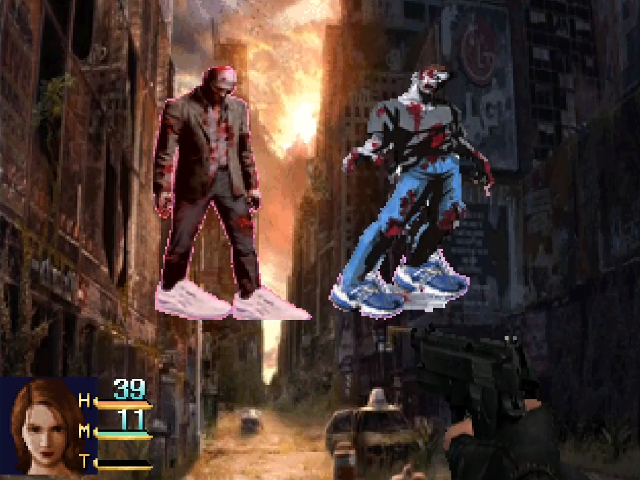 Jill is fighting some zombies (that wears oversized trainers). Probably the most normal situation of the game, if zombies with oversized shoes are normal, that is!

The story... nah it makes no sense, the game is a total mess, a mix of weird situations and events that aren't too coherent and cannot be taken seriously.
But ok, is this fun?
Good question, I guess this depends from your sense of humor, this is really subjective, since the game has some uncomfortable violent and disgusting scenes (there are gratuitous deaths of children and dogs!), I can guess that many people can be turned off by this kind of dark humor. Oh and if you do not like nonsense and wacky stories (despite the fairly normal horror beginning, the adventure soon turns out to be ...something else!) maybe you can avoid this game!

Ok, if you, like me, can bear all this questionable content and have fun with it (it can be hilarious in some parts, I must admit this!), prepare yourself to play one of the weirdest games ever made.
Graphically the game is a mixture of different sprites that goes from Rtp graphics and edits to picture of people of the real world. The clashing of different styles is clearly intentional, some pics aren't even well cropped or they present transparency issues. Ugh, but I guess this part of the humor (crappy humor, that is!). And then there are also some spectacular visual effects that are unexpected, but as soon as they end, you are plunged again in a mess of weird mapping and bizarre and sometimes even glitchy situations that (I'm sure) were purposely made to offer the player a taste of madness.

Same goes from music and sound effects: there is a weird mix of tunes, quotes from real people and a collection of music from different sources! And I mean a rather large collection and a total... (you can guess)... MESS! It may be a beautiful mess if you embrace the genre, considered that's all made for laughts. 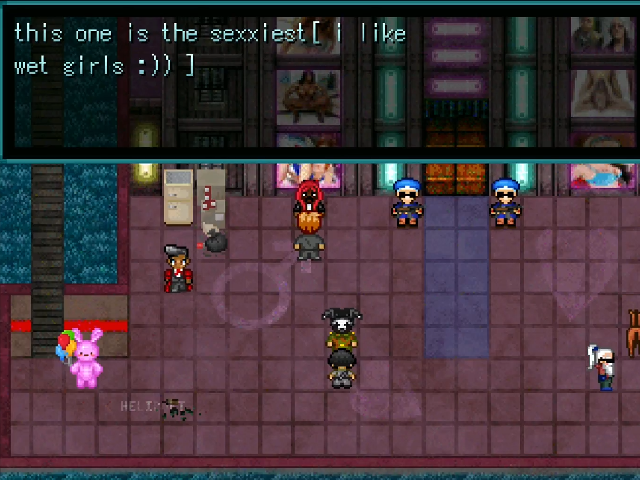 Uh... uhm ok! This is one of the most 'interesting' locations of the game, as you can probably imagine

Ok, now the gameplay! Here's where the things becomes interesting, because if you expected a short and boggy joke game that won't last more than fifteen minutes, you are wrong! It seems that there were a great effort in making this game, considering how long it is and the amount of combat, features, puzzles and minigames!

Let's begin with combat: each enemy may possess different abilities like additional speed, attack and defense, (that are visually represented rispectively by shoes or wheels, various weapons and armors or helmets) and Jill has many different attacks and some special skills that can remove some of these enemy abilities.
Most encounters are triggered by touching the hostiles that roam the maps, but there are mandatory encounters and boss fights too, he good thing is that most of them will resolve rather quickly, and while the difficulty level isn't really high, you can't avoid using a certain strategy to defeat the opponents.
Oh and defeated opponents leaves some "items" like eyes, ears and teeth that can be used for upgrades. Hm wow!

Then there are other activities that goes from button mashing minigames to quizzes, puzzles in which you have to guess a particular code, and so on. In any case there's a lot of (unexpected) content that isn't always well related to the story since the chaotic nature of the game. 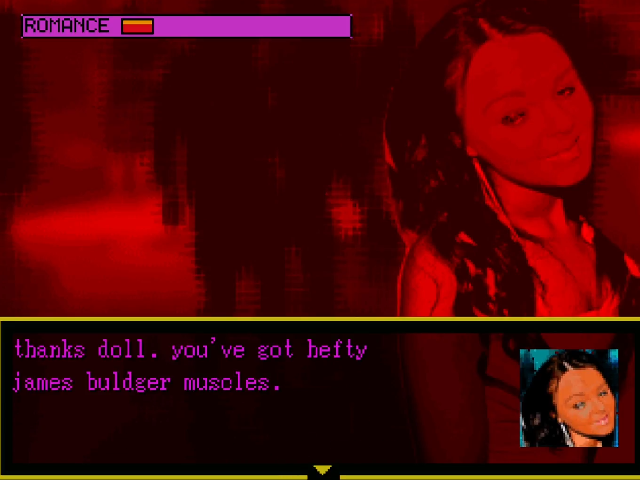 What is happening here? ROMANCE?? Well don't ask, play this game if you dare!

Final, last, ultimate verdict!
This... uh... parody game is a bizarre beast: you can say that this is trash, but it cannot be denied that a lot of effort (and love) made this game highly playable and somewhat entertaining. It may be cheesy, but it's not bugged, boring or awful at all. Even if humor can be considered tasteless of even offensive, even if you won't like the non-sense or when things near the end get political, there's a certain charm, a flash of brillance and some clever features in this work, that makes me understand that many flaws were left on purpouse. It's a dark and weird game about a dark and bizarre, confusing world, but it jokes and laughs about it.

In the end this is a mess. A (maybe) beautiful mess, that gets a 3,5/5 from me. Ok, it's a matter of taste, but I must be objective, you can clearly consider this trash or a masterpiece, so I opted to set for a (sort of) middle ground.

Now... play this game and see if you can enjoy it!

Close
09/19/2020 09:19 PM
Cheers for playing and reviewing this! Just to be clear, the intention was for the entire game to be nonsense. Why? I'm not sure ha ha
TheRpgmakerAddict

author=twentyfour24
Cheers for playing and reviewing this! Just to be clear, the intention was for the entire game to be nonsense. Why? I'm not sure ha ha

Yeeeeah I expected that. Great work anyway. It's a... different kind of game, probably not everyone may like it for obvious reason but... I had fun!!! :)
Pages: 1