And now for something really different...

a game with no words, no dialogues, just relaxing music.
a game of relaxing little puzzles that you have to figure out.
a game like no other.

At first I was attracted by the world of Sideways, so diverse and still full of armony. You won't find monsters or evil creatures, but you will have to interact with the inhabitants and solve their little problems like helping them in finding a lost friend. The world is beatifully animated, birds fly and go away if you approach them, but nothing one speaks and you are the only human in a world of animals and humanoids with animal heads.

The gameplay consist in exploration and solving little puzzles (ok, they are not even puzzles, just fetch quest or find the items and use them) even if just one is sufficient to end the game (and it's the hardest...but not much, hey this is a relaxing game so don't expect to have a hard time). It's a sort of little and simple adventure game.

Graphics, as I said before, is nice and I like the style of the chipsets chosen and how the colors of the world are... well faded and clear, really relaxing, and that fits well the sense of harmony of the setting.
Speaking of the mapping, it's ok and well you can only explore the world going left or right (Sideways!) crossing forests and deserts but ultimately coming back to the starting point! Nice and original concept.

Music consists of relaxing tunes that fits well with the atmosphere of this game. 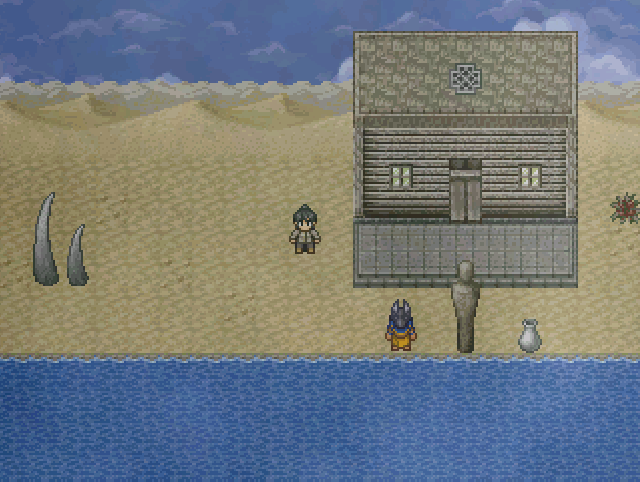 Ok Anubis, so you want to know what I think of this game?

This is a difficult game to rate: it's really short and there is not much to do, there are not even dialogues, BUT this is a game different from many others you will find here. Unique, and probably not for everyone, but it's a pleasant walking simulator, made with lot of attentions, and even if I probably won't play it again (or maybe not, who knows?) I'm still glad to have played it, and being a completionist I tried to find and do every "quest".

So I think it is worth your time, as it oozes quality, from the graphic choices to the music choices. It's a little game, but a little gem.
Just a complaint... I wanted more (more quests, more characters, more locations)! But yes, this is not the purpose of this work but it's something you rarely find.

author=Superstroke
it was a short game for a short event

And despite that it was very good, of course I cannot say much about it, but I think that sometimes it's hard making something good when time is short.

And I also love both Rmk2003 and the charsets chosen!
Dragol

author=Dragol
There were no reward for finishing it 100% (((

True, but I think this is ok since the philosophical nature of the game: it is all about relax, and having fun so... you do not need a reward, just the experience! ;)
Pages: 1