Dreamfarer is a whimsical feast for the eyes! It was a game where I enjoyed the art style so much I wanted to keep playing just to see more of it, the characters were all endearing, and it was a rare case of “cute game turns dark” that I overall enjoyed. You play as both Polaris and Almond, two people stuck in a dream in a world where dreaming is considered a mental illness. Polaris is trying to wake up, while Almond offers to escort her.

This game managed to capture an adorable charm, and for one of the characters their personal tragedy felt childlike and innocent in a way I could only describe as “Ghibli-like”. It had some adorable moments of body horror, too, like the candle person who gives you her hand as a torch. 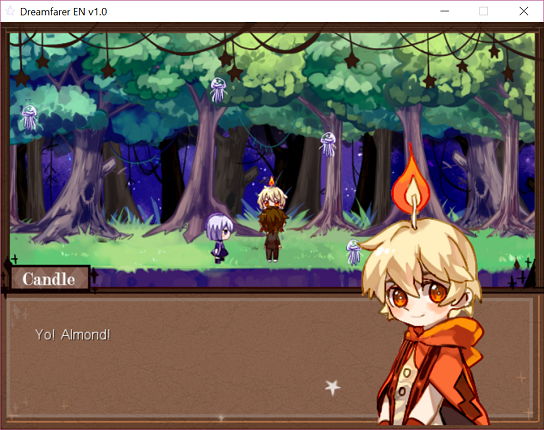 The candle people were just PRECIOUS in general!


I didn’t care for the framing of the setting or how suicide was portrayed, but I also didn’t find it offensively bad or anything. Your mileage may vary! And the game description is up front about it, which I appreciated.

For me, the biggest bummer was actually… just the text speed. The speed itself was a little slow, since I’m a fast reader, but you can’t speed up the text in any way. This was a minor problem in the beginning, but it was combined with a second minor problem: it’s very easy to lock yourself out of certain ending paths and have to replay sections. I mean, with multiple endings you’re going to replay a lot anyways. Eventually I caved and used a walkthrough since I got stuck on a certain puzzle… which i ended up relying on heavily, and this too sucked out some of the joy. (But I relied on the walkthrough after a while because I was tired of replaying sections… because I couldn’t speed up the scenes at all…)

These minor annoyances had snowballed into very large ones by the end. What was whimsical and charming on the first viewing became terribly boring by the fifth, and I was frustrated because it seemed so easily avoidable. There’s no backtracking allowed, too, so be careful before entering buildings and save often.

Once I finished, the extra room and bonus content brought back some of the charm for me, but I found the endgame section a huge slog, mainly because I had to replay so many parts. Still, I recommend this game for if you’re feeling very patient or are just going to use the walkthrough. The puzzles are actually very simple, it’s just that sometimes triggering the right sequence of events can be hard (mainly for the honey puzzle). Finding all the stars takes careful observation, and someone I talked to who had played this game managed to find them all without the walkthrough.

Plus just LOOK AT THIS, IT IS SO CUTE


My playtime was definitely in the 3 hour range, but it’s actually a pretty short game. The extra playtime came from having to replay things and just how long text display could take, but again if you save often and use the walkthrough, you cut out all the potential for the kind of frustration I felt.