Cuteness overload in the land of dreams!

Hello, good afternoon and good weekend!
Today I'll tell you about Dreamfarer, a game made by Harrymiao & Kagari·joshua with RPG Maker XP, and translated into english by RaBooks.
Dreamfarer is an adventure game about dreams and nightmares (in fact it's not all about cute smiles and fun times, there are some more serious and dark themes like suicide and mental illness), with two protagonists that we'll controll: Polaris, the child and Almond, the man.

The game has five different endings, and can be completed in about forty minutes/an hour, but of course if you want to see everything you will need about three hours, and for "everything" I mean also unlocking the extra room where you can also see five extra short episodes and read extra informations about the characters and the game. But let's go back to the main adventure... 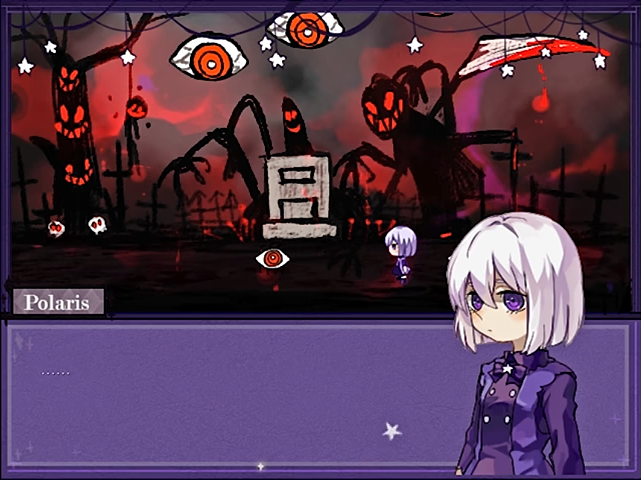 Ok, ok... game is not only cute, but there are also some really creepy moments!

The game is a classic adventure in which you have items to collect and use (you have to actually use most of them since they aren't all utilized automatically by the characters) and some easy puzzles, no chase sections, combat or possibility of getting a premature Game Over, so take your time and enjoy the fantastic and dreamlike world of Dreamfarer. Yes, it's a pretty short game and can be almost be defined as a sort of visual novel adventure, but there is a lot of extra content like collecting stars, unlocking every ending and so on. I don't want to spoil you the fun of learning the story of the protagonists, because it's worth of it, so let's move to the next important aspect.

The graphics. Well the graphics of this game are all custom made and really great: I loved the cute style and the design of the various characters, the sprites are pretty, the portraits are really beautiful, and what about the setting? It's great, colorful and full of details. There are many different locations, all beautiful and well designed. We cannot speak about mapping, because the characters move like some sort of actors on a stage, interacting often with the background and exiting or entering the scene from left or right (so do not expect the classical rpgmaker maps, anyway for a visual novel that's good, considering also the beauty of the graphics). 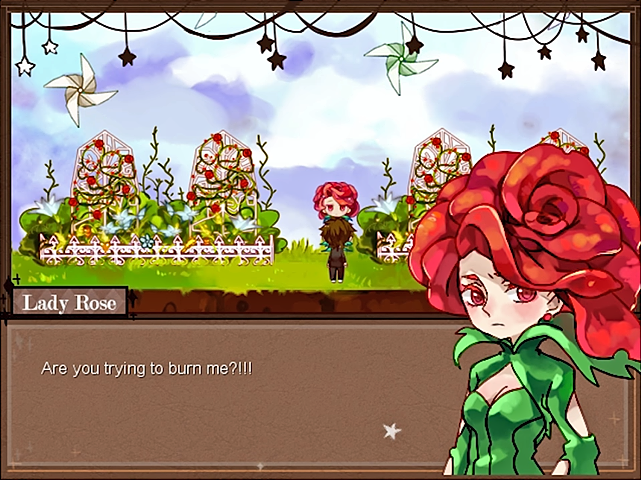 No, Miss Poison Ivy, don't worry! We're not here to burn you!

But this is not all, because there are also lots of cutscenes and pictures that will complement the story illustrating some aningful moments, like for xexample the various endings (but not just those final parts). In the end this game oozes styles, and it's really adorable and charming.
But let's not forget the music: the soundtrack is available on youtube and the soundtrack is pretty good too! Ok, so far all was good, any problem?

Uhm let's see what I did not like: first do not worry because there are no bugs or errors, game is polished and there is also a walkthrough available if you need help. Game is cool and stylish but it has some minor nuisances. For example the text is pretty slow, and there is no way to make it faster, and that's a problem since you probably want to replay the game to get all endings. In fact the game has a linear progression in the sense that once you do some choices you cannot go back, so it's suggested to save your game if you do not want to restart from the beginning. I also found the animations a bit stiffy, but ok I know I am being picky here, still I had to criticize something about this pretty visual novel adventure! 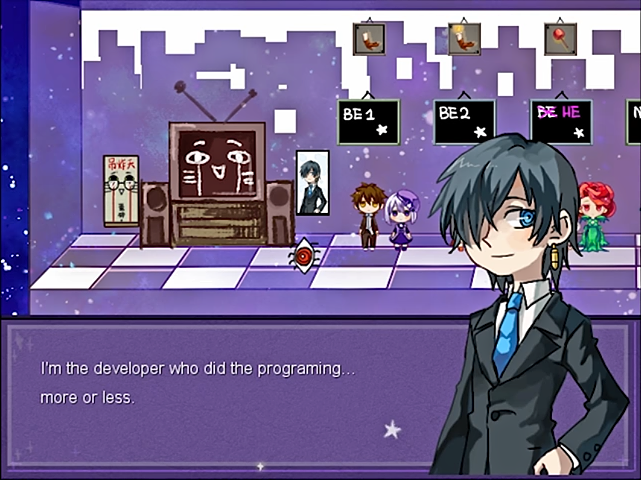 The developer!!! But what's this room? well... play and see, in the meantime read the...

Final Verdict
Dreamfarer is a charming little title that so far flew under my radar. What a pity! This is such a cute story with charming characters (I loved the candle people!) that kept me entertained for three hours, and I also admit that I found pretty interesting not just the story but also all the extra additional content about the game. It's really cool and cute, and wait, I forgot the most important thing: the translation! I cannot say if the original was well written, but surely this version is really well translated, good job! Plot is awesome and story is interesting, so yeah, that's a good game for sure, not just because of the original pretty graphics.